Diocesan Convention hears of hope, challenges in the Holy City and at home 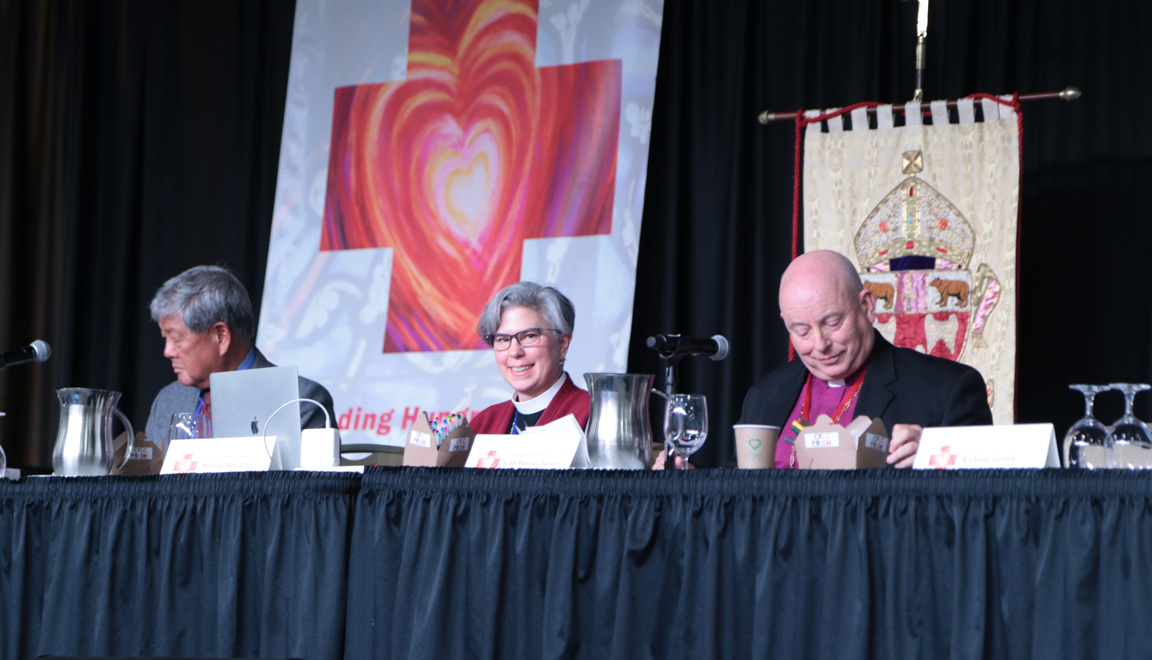 [The Episcopal News] Bishop John Harvey Taylor wove a vision of the Diocese of Los Angeles as a “new Jerusalem where no one is left out”, and where the Spirit “knows something new and exciting is happening” even in bitterly polarized and post-pandemic financially challenging times.

Evoking frequent laughter and hearty applause, Taylor on Nov. 11 welcomed about 700 online and in-person delegates, visitors, and exhibitors to the Riverside Convention Center for the 127th annual meeting of the diocese, themed “Back to the Holy City, the Hope of Christ in Our Time.” Guests included keynote speaker Jerusalem Archbishop Hosam Naoum, who addressed convention on Nov. 12 about sustaining hope in challenging times. (See related story.) 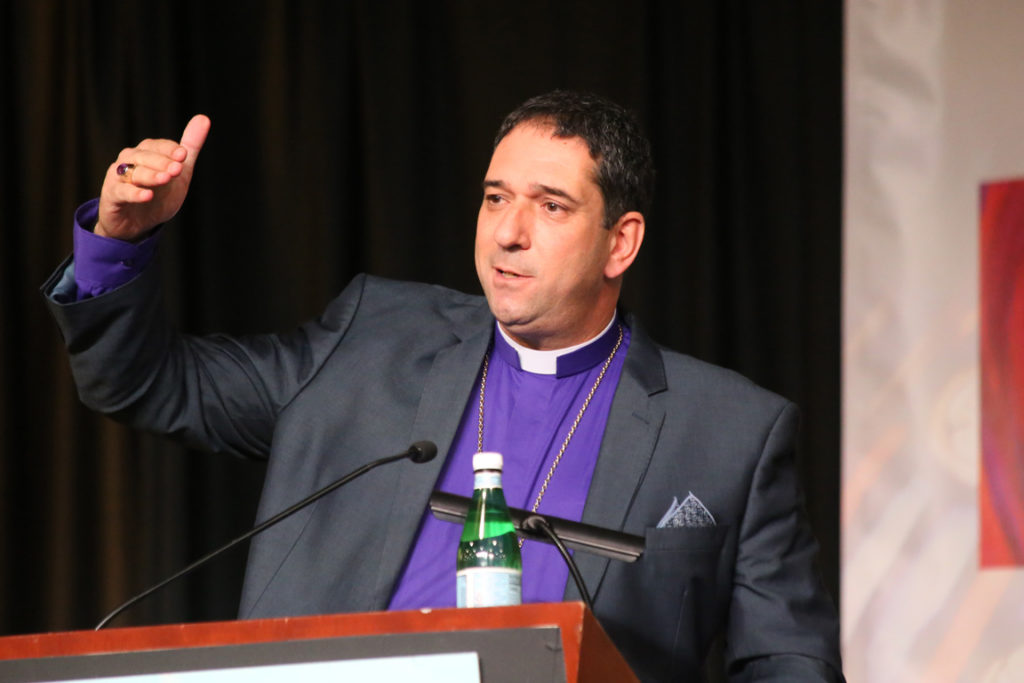 “Jerusalem is a living invitation to healing and reconciliation,” said Taylor who visited there as recently as August of this year, his ninth trip to the Holy Land. “If Archbishop Hosam can keep hope alive amid injustice and poor political leadership, then we can, too. Each day, the Holy Spirit whispers our invitation to a New Jerusalem, despite our divisions and anxieties, despite whatever injustices and inanities may plague us – despite the plagues that plague us. Sometimes we just need a little faith – which is why it’s encouraging to see how much faith they have in Jerusalem despite the odds they face.”

A video of Taylor’s address is here.

Taylor announced that he and Canon Kathy O’Connor, to whom he is married, will lead a March 2023 pilgrimage to the Holy Land. The Los Angeles diocese has enjoyed a companion relationship with the Diocese of Jerusalem since 2005. 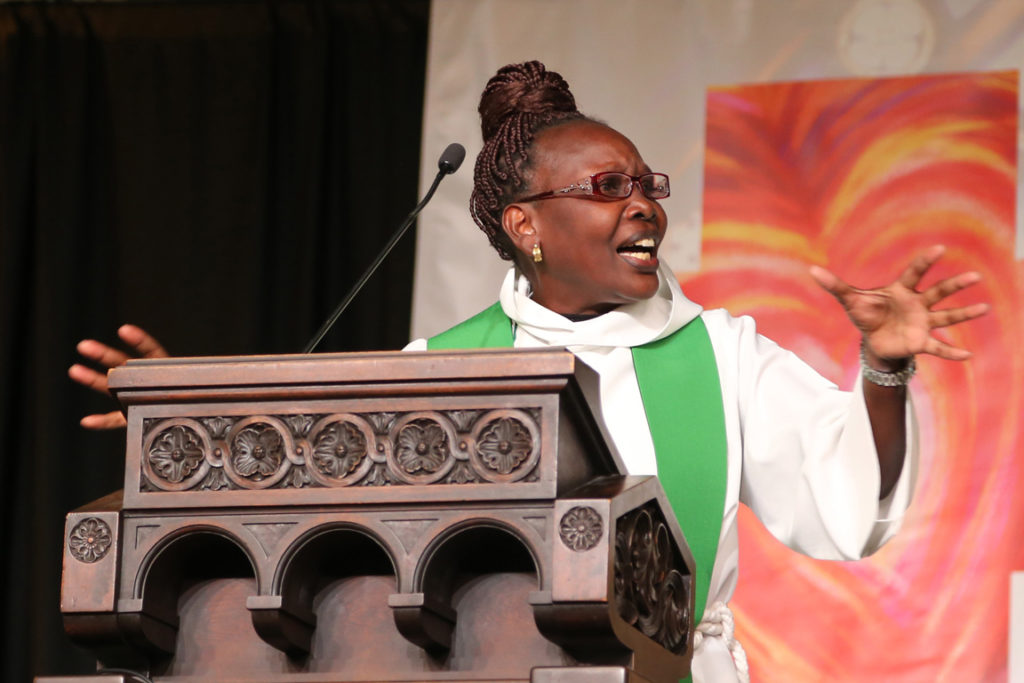 The Rev. Mary Tororeiy, preacher at the Nov. 12 morning Eucharist, described God’s companionship with God’s people, a relationship that enabled the people of God to imagine and envision themselves filled with hope amid challenges – not unlike present times.

“Like the hope that filled us during Covid, and we kept going and going and meeting and discovered we can do church at home, and through Zoom and Facebook, that we never gave up.”

The diocese is being invited to imagine and envision “God in our midst, dwelling with us in our communities, in our parishes, in our mission congregations, in our diocese, in our world,” said Tororeiy, vicar of St. Paul’s Shepherd of the Desert Episcopal-Lutheran congregation in Barstow. 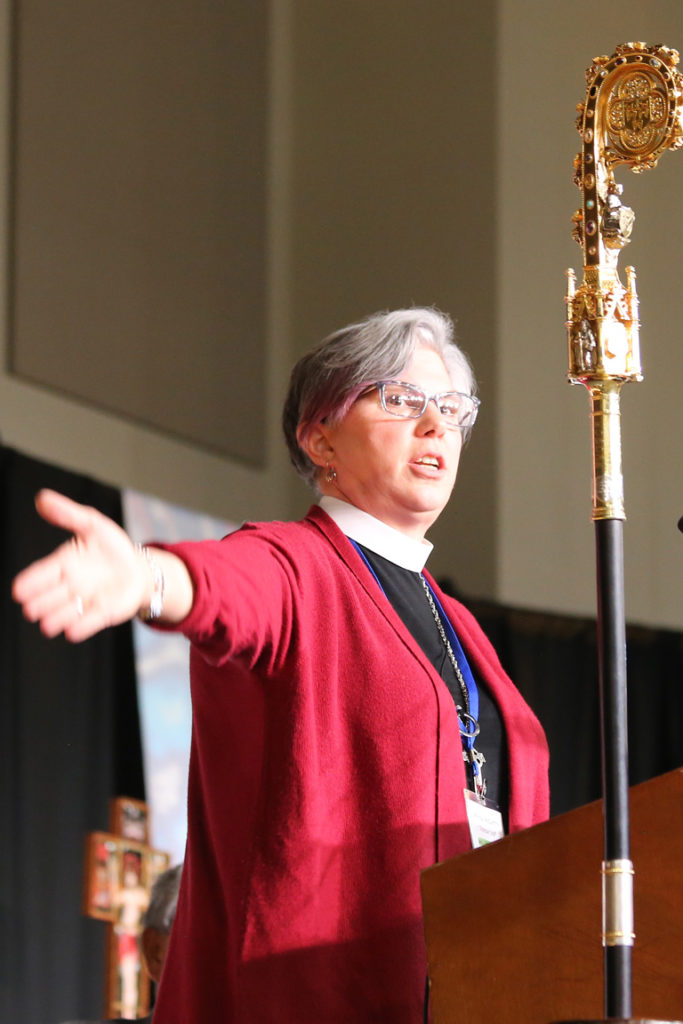 Canon to the Ordinary Melissa McCarthy addresses the challenges facing the diocese and the church, ending on a note of optimism for its future. Photo: Janet Kawamoto

Similarly, Canon to the Ordinary Melissa McCarthy described desperation as a gift in the “grim” post-covid realities of declining church attendance, deteriorating buildings, and stressed clergy. “The gift of desperation is an invitation for us to let go of our expectations, to let go of daydreaming about the church of the past somehow coming back into being” and instead focus on exciting change, she told convention.

She mentioned as an example the shared clergy and resources among Trinity Church in Redlands, St. Stephen’s Church in Beaumont and St Alban’s, Yucaipa, as well as partnerships between Long Beach churches St. Gregory’s and St. Thomas of Canterbury and also congregational collaborations in the Inland Empire’s Deanery 6 – “a very interesting place to be right now,” she said.

McCarthy will convene a working group in 2023 to study and to work with congregations who need or want help or want to be a part of this collaborative process. “There is no one model,” she said. “All of our congregations are different, different personalities, histories. But there is plenty of opportunity and it is time for us to come together and be curious about how God is working to keep this church alive and thriving in this increasingly secular time.”

Sometimes, both clergy and congregations become “myopic,” she added. “We really do forget that God has got this. We forget that this is God’s Church. So we show up, we do the work, we pray, and we give glory to God whose power working in us can do infinitely more than we can ask or imagine.” (Video of McCarthy’s remarks is here.) 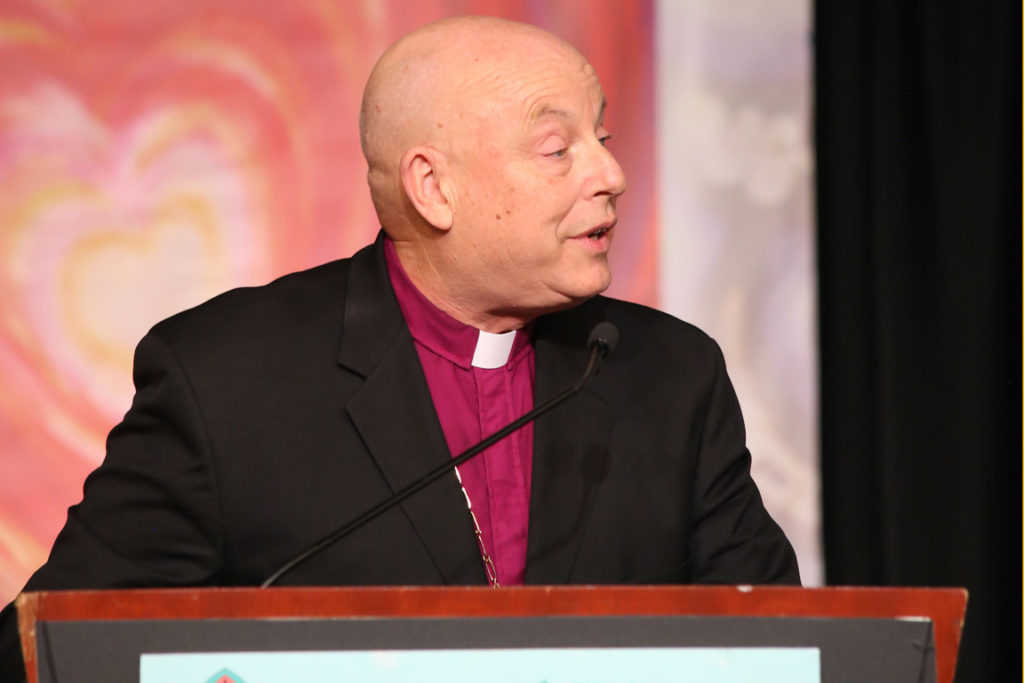 Bishop Taylor delivers his address to the convention during the Nov. 11 session. Photo: Janet Kawamoto

Taylor, who recently turned 68, has served as bishop diocesan since December 2017. In his address he listed five values as context for the next four years, or “second half” of his episcopacy, including:

1. Broadening multicultural and polylingual competency, including “truth-telling about the racism and prejudice woven through and through our diocesan story over the years,” said Taylor, adding, “We must tell the truth, and then we must be accountable to one another.” The 2023 budget, for example, increases New Community Ministries funding by about 35%, from $49,000 in 2022 to $136,000 next year, he said.

2. A diocese reorganized around shared ministry and mutuality; perhaps smaller, “but serving our people and our neighbors better. Our resolve remains to be the Episcopal Church this region so desperately needs in this age, to abandon no neighborhood or community where our God in Christ has us at work today … proclaiming always that wealthier churches will always have a family responsibility to less wealthy ones – and accepting that we may have more Sunday morning churches than the Holy Spirit needs right now.” 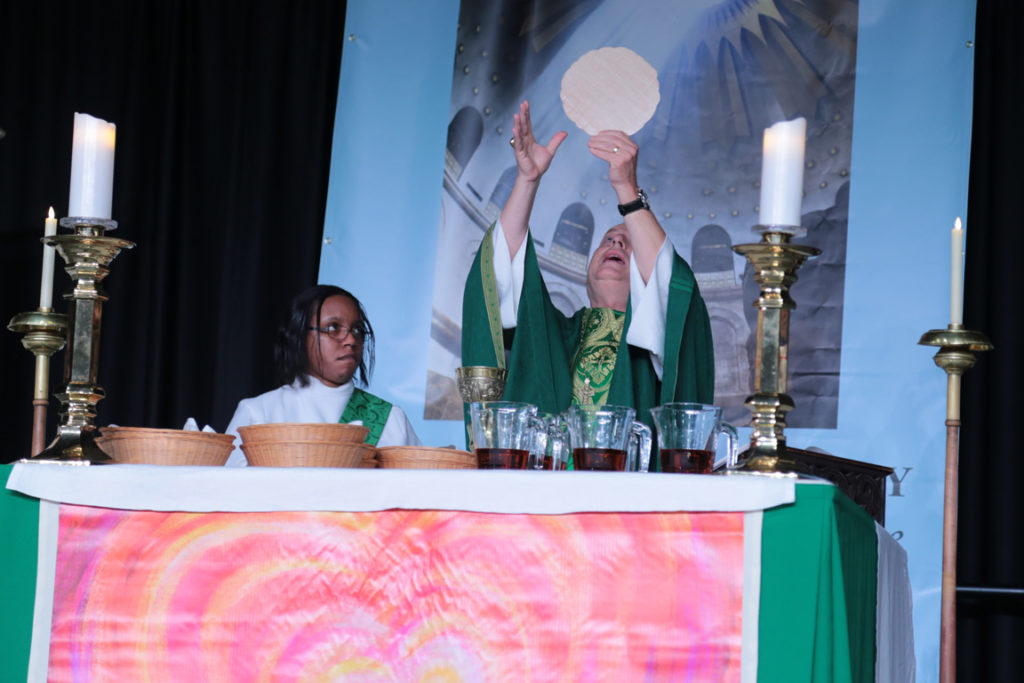 3.  Financial transparency, 12% assessments and review of past spending. Diocesan treasurer Canon Andy Tomat, for the second straight year, presented a balanced, $11.6 million consolidated budget, which convention approved unanimously. The budget “has some sharp edges,” Taylor said; diocesan staff has been reduced to bare bones and is “overworked and overperforming even as they and our retirees are being asked to absorb cuts in health benefits.” Taylor also announced 12% mandatory mission share fund assessments for parishes beginning Jan. 2024, as well as continued review of past spending.

“We still have some work to do to understand a little better how our money was spent in the past, but we know enough to say that the system put overwhelming pressure on bishops to sell real estate. Our siblings at St. James, Newport Beach fell victim to this dynamic,” Taylor said. Since the congregation was readmitted as a mission church they have been doing “amazing, innovative ministry,” he said, adding that convention 2023 will consider St. James’ request to return to parish status.

4. Affordable, permanent supportive housing, as evidenced at the Church of the Blessed Sacrament in Placentia, where the Santa Angelina project is expected to provide 65 affordable apartment homes to seniors, including homeless persons. Similarly, 50 affordable apartments for unhoused persons at the St. Michael’s Ministry Center in Riverside, are slated to open later this year. Other housing projects are planned for St. Joseph’s Church in Buena Park and St. Michael’s, Anaheim.

“We’re aiming for 30 (such projects). If you’re interested in sustainability according to the gospel for ground leases, plus welcoming new neighbors you can visit and drive to movies and the doctor, plus battling housing insecurity in the most effective way possible, namely by building housing, call me!” Taylor said amid robust applause.

5. Creation of a $30-40 million endowment. “A complex nonprofit religious organization such as ours, with an $11.6 million budget, needs an endowment of $30-40 million,” he said. Funds raised and pledged so far to the Generation to Generation capital campaign total about $18 million, but more gifts and pledges are needed for three planned endowments; “diocesan operations; grants to our local neighbors in need; and formation of the leaders, lay and ordained, the church needs in the 21st century.”

The One Body and One Spirit Emergency Appeal, launched during the pandemic, has raised nearly half a million dollars for grants to diocesan institutions, averaging about $7,500 each. “Watch your email box for a new round of fundraising appeals, just in time for the first Sunday of Advent and Giving Tuesday on Nov. 29 – and thank you for continuing to be so generous,” Taylor said. “We’ll announce the latest grants back to churches on Dec. 14.” 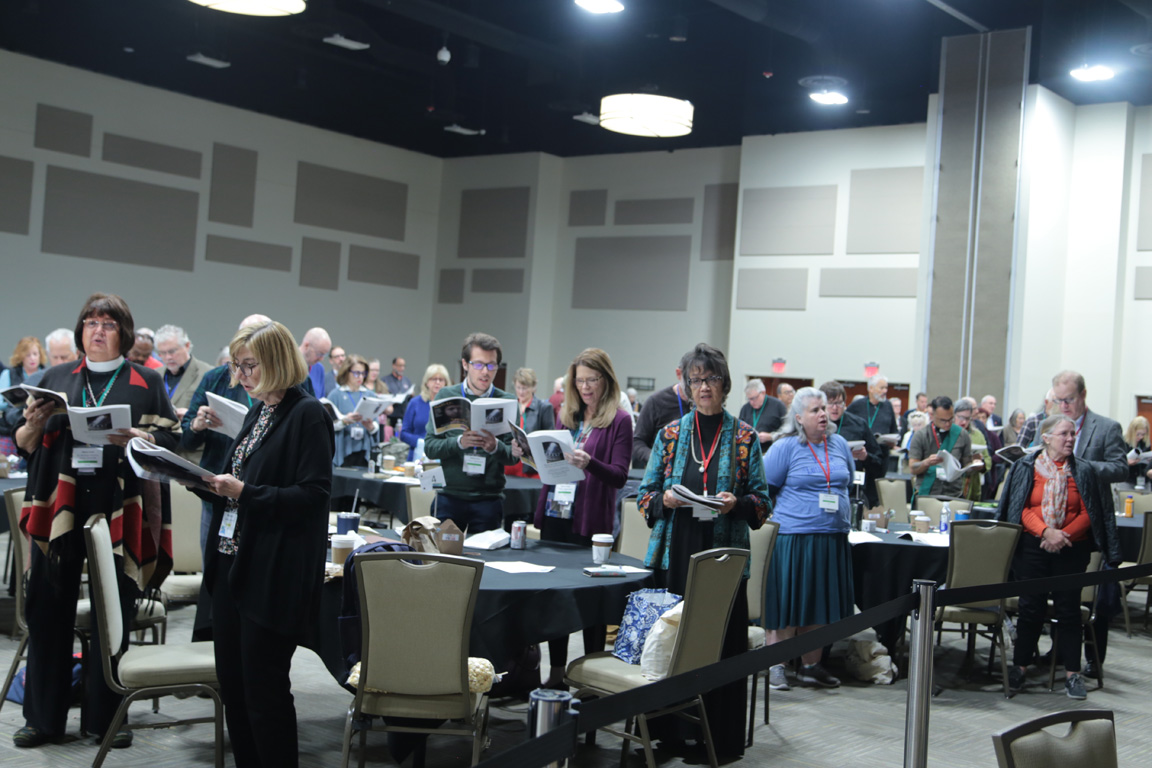 Clergy and lay delegates stand to join in a hymn during the convention Eucharist. Photo: Janet Kawamoto

A ‘New Jerusalem’ in central and southern California

In addition to Seeds of Hope, the diocesan food justice ministry, and IRIS, the Interfaith Refugee and Immigration Service, Taylor cited three other “building blocks of the New Jerusalem” in the Los Angeles diocese:

• The Bishop’s Commission on Gospel Justice and Community Care, which has focused on the mental health crisis disproportionately affecting communities of color;

• Bloy House: The Episcopal Theological School at Los Angeles’s transformation from a “semi-seminary into an innovator in lay leadership formation and diaconal education,” including The Center for Lay Chaplaincy, which hosted a listening center at convention, to demonstrate its ‘chaplaincy everywhere’ mission. CFLC, which recently merged with Prism, the restorative justice ministry of the diocese, received a $100,000 seed grant from Trinity Wall Street – part of the Holy Spirit’s movement in the diocese, Taylor said.

Also, the diocese’s archdeacon, the Venerable Laura Siriani, “reports that the number of those discerning whether they’re called to be deacons is at least 25, an unprecedented number,” Taylor said. “There’s a sweet and vital spirit of servanthood in this place.”

• The Bishop’s Commission on Climate Change and Creation Care, led by Canon to the Ordinary McCarthy, who said the group is piloting a program for disaster resiliency with the Dr. Lucy Jones Center for Science and Society, and is seeking ten congregations to participate. Interested congregations may join by visiting the center website.

The Ven. Paul Feheley, The Episcopal Church’s partnership officer for the Middle East, reported about the efforts of the American Friends of the Episcopal Diocese of Jerusalem (AFEDJ) and its support of schools, hospitals and centers for children with disabilities; as well as Episcopal Relief and Development’s work on behalf of children and young adults with disabilities. 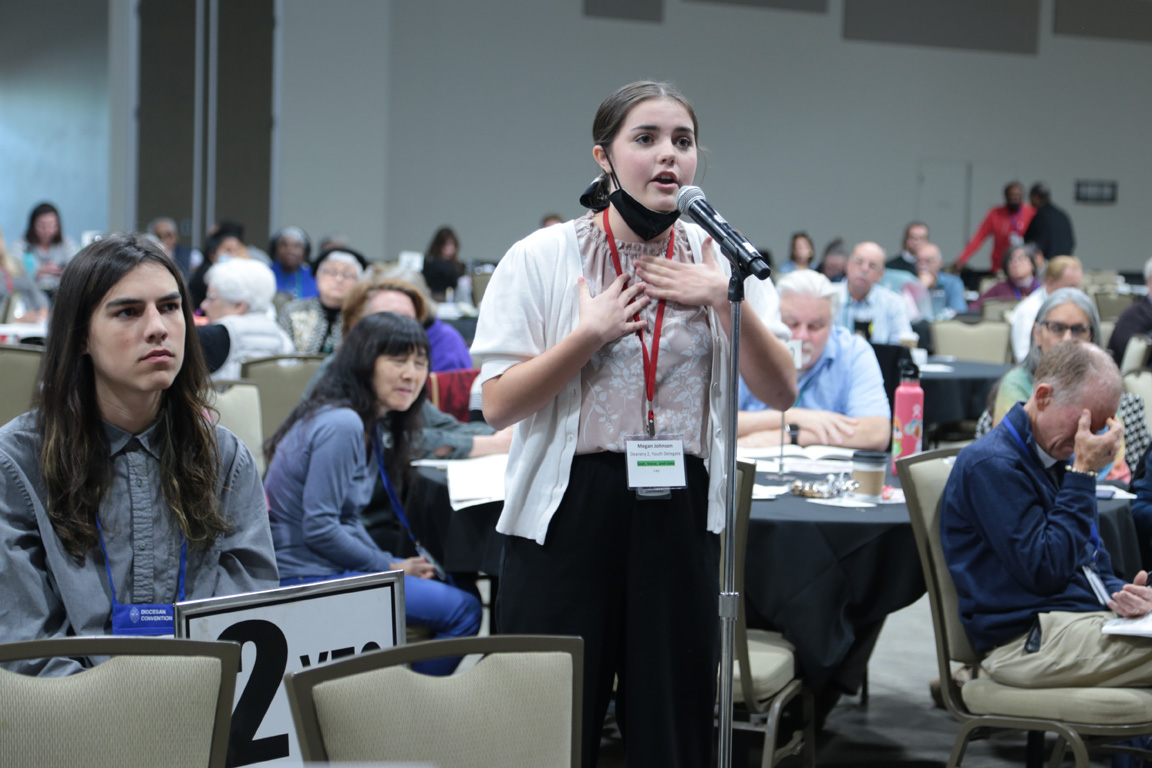 Delegates also approved an environment-related resolution affirming The Episcopal Church’s Covenant for Care of Creation as a guideline for diocesan policy. A second resolution, encouraging Diocesan Council to identify and implement practical cost-effective measures to address climate change in the day to day operations of the diocese, was also approved.

Secretary of Convention Steve Nishibayashi read three resolutions referred from the 80th General Convention, including: A031, amending the Article V, Section 4 of The Episcopal Church constitution that mergers of dioceses be made in accordance with canon law; and A059, which provides for a working group to propose and recommend prayerbook revisions to the 81st General Convention, to be held in July 2024 in Louisville, Kentucky. A third resolution, A157, amending Article 1, Section 7 of the constitution to provide that if there are special circumstances, changes in meetings of the General Convention shall be made in accordance with church canons, was also read aloud to convention.

During the Friday night convention dinner, Taylor named four new canons of the diocese and honored the Rev. Canon Kelli Grace Kurtz, who recently stepped down as chair of the Program Group on Mission Congregations after a 15-year tenure on the group. (See related story.)