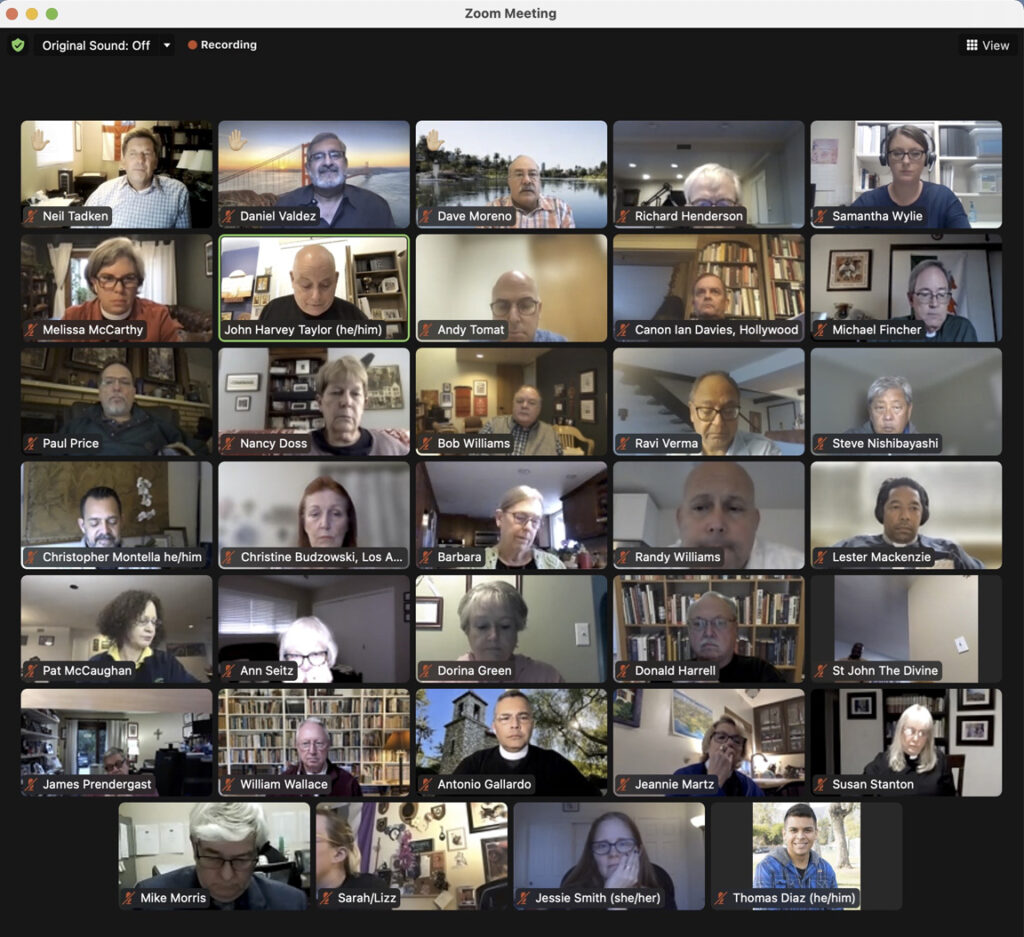 [The Episcopal News] Buoyed by recent priestly ordinations and a gathering of Province 8 bishops hosted at the St. Paul’s Commons Retreat Center, Diocesan Bishop John Harvey Taylor told the Jan. 13 meeting of Diocesan Council that “rediscovering mission, optimism and responsibility as stewards of true Christian orthodoxy” are themes as the program year gets underway in 2022.

“In view of recent events in our country, we have no option other than to proclaim that the incarnate God, the risen Christ, the plural face of God, reflecting all races and cultural and national designations, all orientations and identifications, the full complexity of human expression all in the face of God, is true orthodoxy,” Taylor said after a brief welcome and orientation for new council members.

He encouraged joining the Jan. 15 annual diocesan Martin Luther King Jr. celebration (see related story), sponsored by the H. Belfield Hannibal Chapter of the Union of Black Episcopalians. King “not only said ‘I have a dream,’ but called us to a radical understanding of our servant-based responsibilities to one another, to be practitioners of equity, and economic and political and social justice to one another,” he said.

Taylor, who on Jan. 8 ordained Julie Beals, Jose Luis Garcia-Juárez, Katherine Feng, Guy Leemhuis and Joshua Paget as priests, added that the nation and the world need now, more than ever, “the redemption, the love, the forgiveness and the inspiration of the Risen One.” 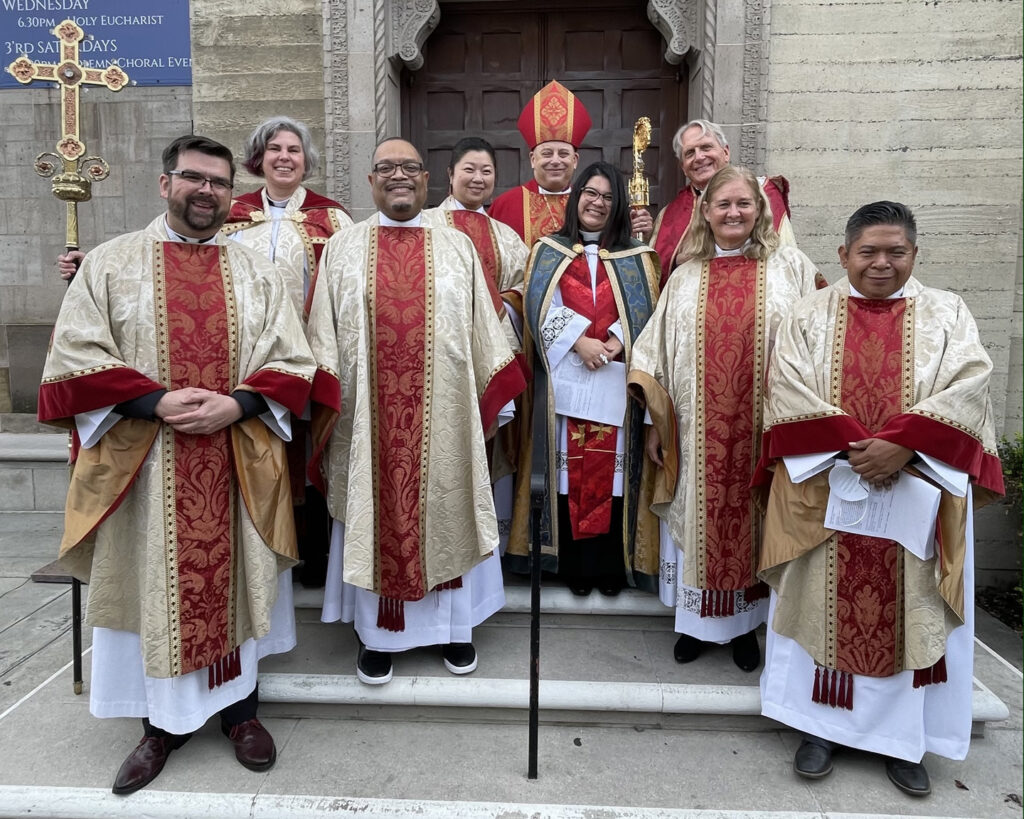 Both Taylor and Canon to the Ordinary Melissa McCarthy called for reigniting and re-engaging passion for diocesan program groups, which carry out throughout the year the resolutions passed by diocesan convention.

The work of the Program Group on Global Partnership is especially important because, “here in Los Angeles we are … a diocese devoted to its inevitable multicultural, poly-lingual future and continuing to be a prophetic voice against privilege and against racism and against prejudice of any kind,” Taylor said. “Part of that is to be in conversation with our global partners in the Middle East, in Central America and throughout North America as immigration issues continue to be front and center.”

McCarthy also invited council members to both join and to recruit interested individuals for diocesan Bishop’s Commissions, which carry out the work of the General Convention of The Episcopal Church, she said. Commissions currently focus on the following areas of mission: Architecture; Climate Change; Gospel Justice and Community Care; Liturgy and Music, and Ministry.

“Additionally, there may be task forces which are set up to deal with a particular issue that the bishop has identified,” she said. Task forces, for example, such as the one on affordable housing, typically have a start and an end date, she said.

Volunteer treasurer Canon Andy Tomat reported that Mission Share Fund support from congregations continues to be strong, “and we expect to end the year ahead of our $4 million budget. Our other income has run significantly under budget for the year, driven partly by programs that could not and did not occur, as well as hoped-for fundraising and grants that were not realized,” amounting to approximately $250,000 under budget.

The report, based on 2021 financial results through Nov. 30, indicated that reduced spending, the result of delayed or deferred hiring of staff positions and less in-person programming, offset the deficit. Expenses were $380,000 less than budgeted, “leaving us with a small surplus that we expect to continue through the end of the year” he said.

Additionally, 2022 MSF pledge commitment forms have been mailed to all congregations. 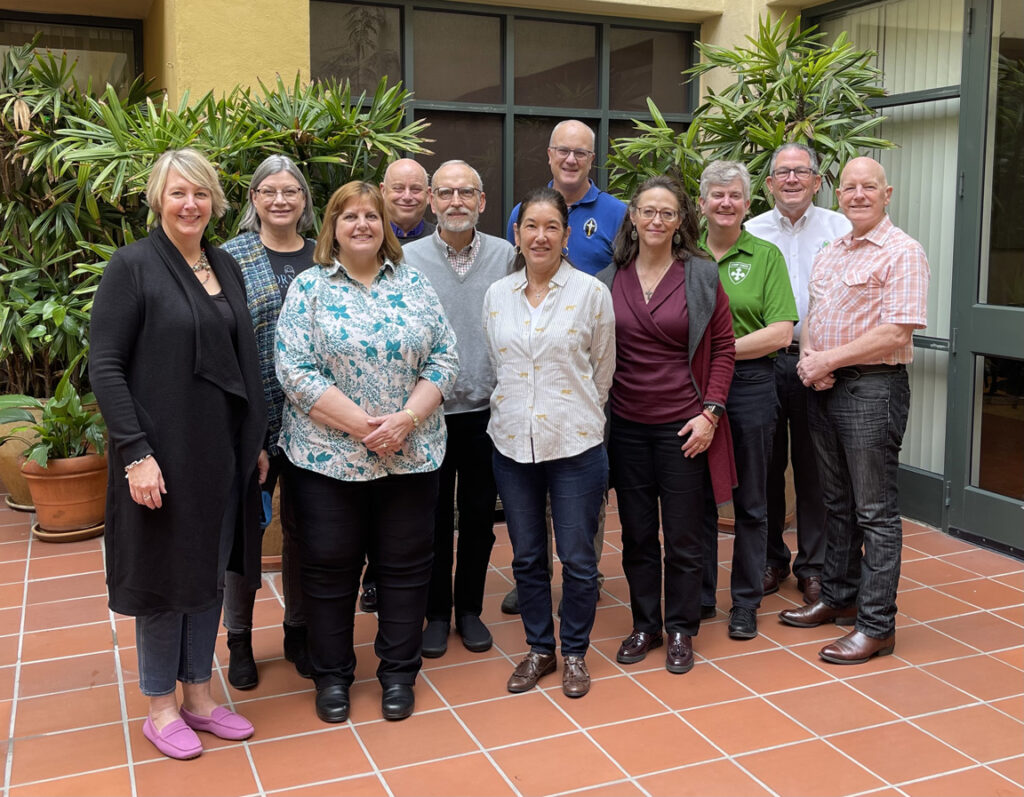 Other reports of interest

ECW: Christine Budzowski, president, reported that the diocesan Episcopal Church Women are revisioning their mission and planning to meet with both Taylor and McCarthy “to share what we’ve come up with so far, and to inspire one another and to walk away from the meeting with a fresh view of things and a new vision.”

ECW-LA will send four representatives to the ECW Triennial, running concurrently with the 80th General Convention of The Episcopal Church, slated for July 7 – 14 in Baltimore, Maryland. The four will be the diocesan president and vice president and presidents of the diocesan Daughters of the King and United Thank Offering.

General Convention deputation: Thomas Diaz, liaison for the Los Angeles deputation to General Convention, said he and two others from the diocese – Canon Steve Nishibayashi, Secretary of Convention, and the Rev. Antonio Gallardo – are members of the Joint Nominating Committee for the Election of the Presiding Bishop and will participate in an online meeting the week of Jan. 18. Nishibayashi was elected in December as co-chair of the committee.

Diocesan Convention: Plans are underway for the 127th annual diocesan convention, tentatively scheduled for Nov. 11 – 12, Nishibayashi reported. The convention may be in-person or virtual or a combination. “Stay tuned,” he said.

The diocesan convention website contains updated forms for insurance, vestry and bishop’s committee rosters, and a 2021 parochial report, “customized to allow more narrative and accommodations for virtual as well as in-person worship,” he said. Also included are nomination forms to elective offices. “It’s not too early to consider running,” Nishibayashi added. “As a preview to General Convention 2024 we will be electing deputies to that convention at our diocesan convention in the fall.”

Seating of Bishop Bruce: Several members of the Diocese of Los Angeles community attended in person the Jan. 6 seating of the Rt. Rev. Diane M. Jardine Bruce as bishop provisional of West Missouri, which also was livestreamed, according to Taylor. They included her chaplain, Ken Chow, the Rev. Beth Kelly and the Rev. Michael Corrigan, as well as her spouse, Canon Steve Bruce.

My Work to Do: The Very Rev. Jeannie Martz said three Deanery 9 congregations (St. Paul’s, Tustin; St. Joseph’s, Buena Park and Trinity, Orange) have joined together for My Work To Do, an anti-racism affinity group. MWTD is the creation of Canon Suzanne Edwards Acton, co-chair of the diocesan Program Group on Black Ministry, and is designed to help white people build stamina for discussing racism, systemic injustice, racial healing, reconciliation, and justice in their everyday lives, according to the website.

Week of Prayer for Christian Unity: Canon for Common Life Bob Williams noted that Jan. 18 – 25 is the Week of Prayer for Christian Unity “and a good time to focus on what we are doing and what we might do in partnership with our fellow Christian denominations and colleagues in our local areas and in our region.” The Program Group on Ecumenical and Interreligious Relations is exploring deepening relationships, he said.

McCarthy reported that a 4 p.m., Saturday, Feb. 12 Lunar New Year Service will be hosted by Chinese-speaking congregations. More information will be provided in upcoming issues of The Episcopal News Update.

The Rev. Canon Ian Davies, rector of St. Thomas the Apostle Church, Hollywood, reported from Deanery 3 that the Church of the Holy Nativity, Westchester, is hosting a food preparation session for those who are homeless and those experiencing food insecurity at 1:30 p.m. on Sunday, Feb. 6.

McCarthy announced that an upcoming Bystander Intervention Training, part of a “Becoming Beloved Community” grant from The Episcopal Church to The Gathering, is planned for 1 p.m. on Saturday, Feb. 12 and will be coordinated by Asian Americans Advancing Justice.

A proposed resolution, echoing Roman Catholic Pope Francis’s assertion that getting the Covid vaccine is a moral obligation and that those who refuse to do so are selfish, was withdrawn after discussion.

Diocesan council meets next at 4 p.m. Thursday, Feb. 10 via Zoom.