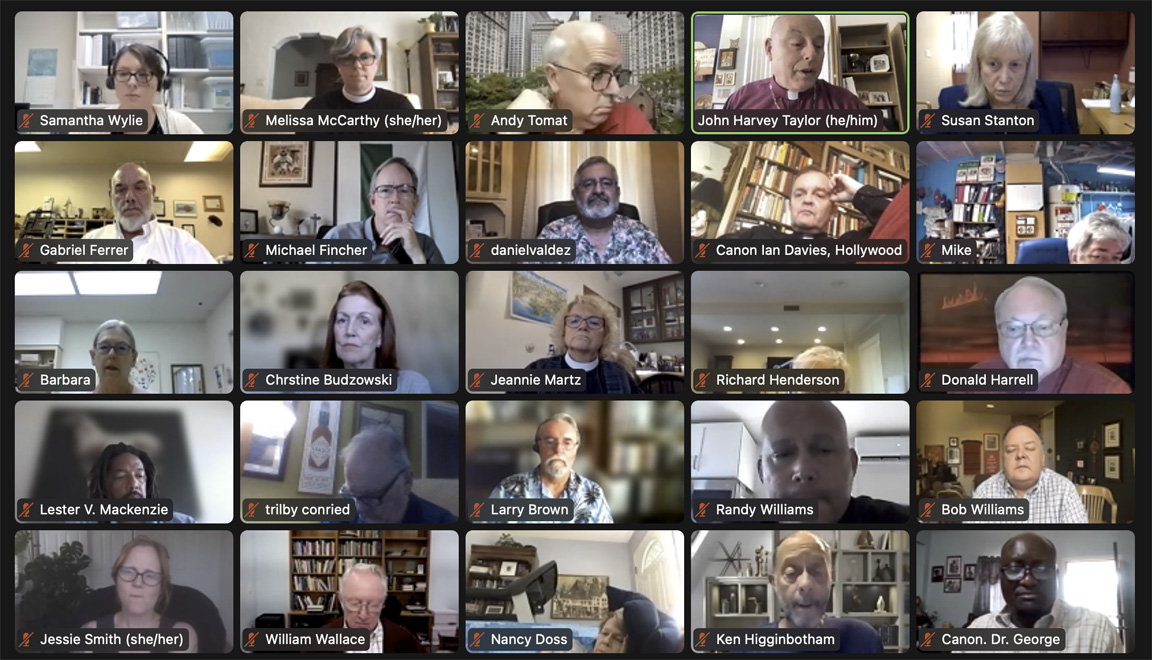 [The Episcopal News] Bishop John Harvey Taylor opened the Sept. 8 online meeting of Diocesan Council with a tribute to Her Majesty Queen Elizabeth II, who died earlier that day at Balmoral Castle in Scotland at the age of 96, a day on which The Episcopal Church commemorates the Nativity of the Blessed Virgin Mary. 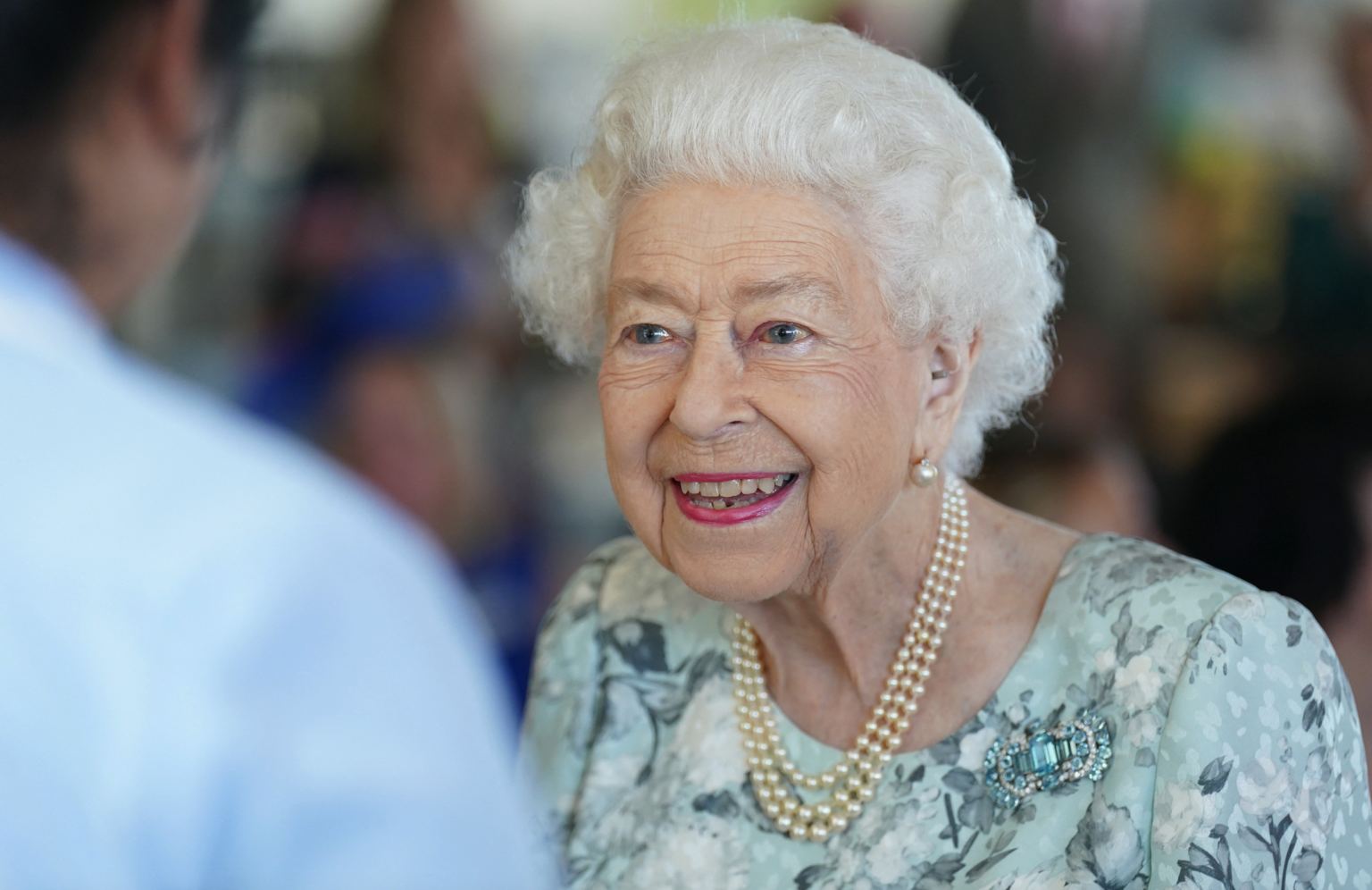 Queen Elizabeth II of the United Kingdom, who died on Sept. 8 after a 70-year reign, exemplified duty in the spirit of Mary, mother of Jesus, Bishop John Harvey Taylor told Diocesan Council.

In many ways, the two women were alike, Taylor said. “Elizabeth was 10 or 11 … when she went from being third in line to the throne … to being first in line,” after her uncle, Edward VIII, abdicated to marry American divorcee Wallis Simpson in 1936 and Elizabeth’s father became King George VI.

Like Mary, she willingly accepted her vocation and possessed a sense of duty that accommodated changing times and prompted her, two days before her death, to “accept a prime minister’s resignation and welcome his successor, working right up to the end, working in the spirit of Mary,” Taylor said.

“A life of faith is always a matter of discerning what the spirit of God is calling us to do and saying to the spirit of God, ‘let it be with me according to your word.’ It is a privilege to be with a group of diocesan leaders who lead in that spirit.”

Discussion of financial challenges dominated much of the meeting. Taylor announced plans to initiate a diocesan-wide conversation about annually assessing parishes at a canonical minimum of 12% of their net operating income to help achieve a balanced budget, he told the council.

“Most dioceses do [mandatory assessments], and some assess at 15% or even, I understand, 18%” he said.

“We know, because we’ve been walking with you, that the last two and a half years have been hard for all our communities,” Taylor added. “Even now, many of our larger churches are making courageous efforts to increase their mission share fund percentage to meet the canonical minimum even in this recovery year of 2022.

“If revenues are down at your parish, then 12% of net operating income will be a smaller number,” Taylor said. “The [Joint Budget] Committee is just asking parishes to step up to the plate and do what our canons and the spirit of our Episcopal polity require. It’s also a matter of fairness that many parishes pay their equitable share, while others with equal, or in some cases greater, resources do not. Churches that are truly struggling will have access to an appeals process.”

Taylor made the announcement after diocesan treasurer Canon Andy Tomat reported that, while pledge commitments had increased in 2022 to an average 9.9% of parish net operating income, up from 9.2% in 2021, past-due congregational payments for that same period amounted to about $800,000.

In the initial stages of planning the 2023 budget, “we are looking at a $1.2 million deficit on a consolidated basis, far more than we’ve ever had to face before,” Tomat told council members. “There are no unrestricted Corp Sole or Corporation of the Diocese funds to cover the shortfall.”

The Diocese of Los Angeles, like all dioceses, also pays an assessment to the Episcopal Church of 15% of its normal operating income, based on their reports from two years prior.

The deficit will trigger cuts in 2023 benefits, Taylor said. “The Joint Budget Committee, the bishop’s office and the finance office believe that there is no fat to trim in Echo Park. “Diocesan staff is already as small as it’s been in years, and we’ve deferred some hiring as part of a plan to make sure we finish 2022 in the black. Overperformance and weariness are real factors … and 2023 benefit cuts are likely to hurt,” Taylor said. The current health insurance program for diocesan employees costs in excess of $1.2 million for 2022.

The mission share fund income enables support of ministries of local mission congregations as well as the wider Episcopal Church and Christian formation.

Tomat also reported that MSF expenses are under budget because of hiring deferments in the bishop’s and finance offices and the timing of diocesan convention expenses.

Meanwhile, the Corporation of the Diocese portion of the consolidated budget is experiencing a $420,000 shortfall year to date. The deficit stems from not receiving rent and administrative support costs from grant-funded programs, such as Seeds of Hope and IRIS (Interfaith Refugee and Immigration Service), and also from uncertainty about how to fund ongoing capital campaign expenses, he said.

Those factors have resulted in “a significant drain on the remaining cash reserves,” which he hopes will be reversed in 2023 through increased MSF income from several larger congregations expected to commit to moving to the 12% contribution level in 2023. Taylor and Tomat also said that other efforts are under way to trim the 2022 deficit.

“We expect our institutions like IRIS, Seeds of Hope and the newly formed Center for Lay Chaplaincy will now allocate a standard portion of their grants to cover the cost of administrative human relations, payroll, internet technology and facilities expenses incurred on their behalf by the diocese,” Tomat said.

“The more painful actions we need to take to balance the budget focus on reforming our benefit programs, which are among the most generous offered in The Episcopal Church. We remain committed to insuring health care for all and parity of benefits between clergy and lay employees. We will still provide our dedicated staff with excellent benefits similar to what our parishes and other large institutions like UCLA provide their staff.

“We are also committed to continue to support our missions to the greatest extent possible, for that is the primary purpose of the Mission Share Fund.”

The goal, Tomat said, is to balance the 2023 budget without implementing the assessments, “giving us time to deliberate as a council and diocese about how to implement it in 2024. We will also be implementing an electronic payment system during 2023 that will provide churches with the ability to submit MSF payments online and monitor their balances on a real time basis.”

Financial challenges notwithstanding, Taylor said he has urged “program groups to think big about their program budgets in 2023. Program dollars go a long way, and next year, as we focus on truth-telling and reckoning about racism and racial justice, that programming is going to be the heart of our ministry.”

Mandatory assessments are an essential part of long-term solutions and “will make it easier for us to be generous in our mission and ministry … while taking much of the guesswork out of our newly reformed, collaborative budget process,” he said. “It’s just one part of the long-term solution to putting our diocese on an even keel for the sake, not so much for ourselves, but for the sake of the saints who will inherit it.”

He added: “It’s hard work, holy work. It’s the work of putting us on a firmer, more reliable or transparent foundation for growth, so that the saints of the future inherit a going concern here in Los Angeles.” 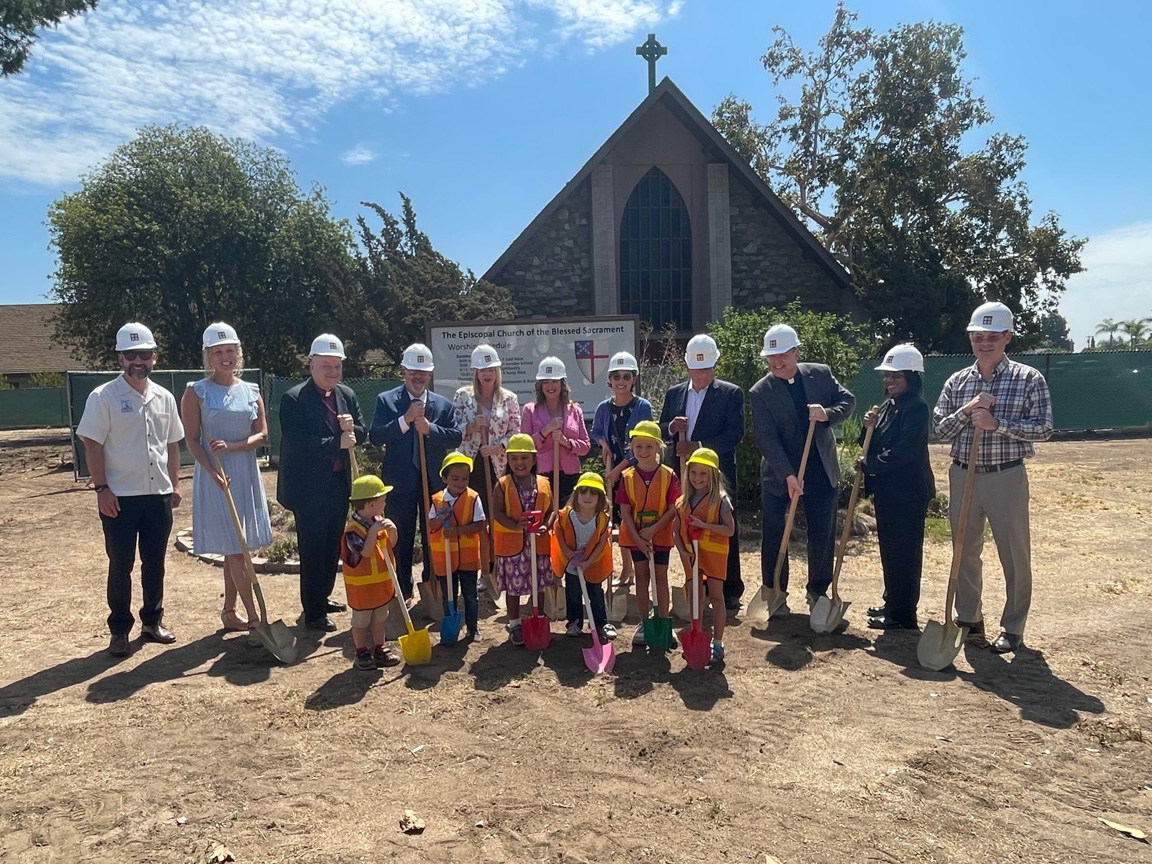 “We broke ground in August for Santa Angelina, an affordable and permanent housing project being hosted by the wonderful people of Blessed Sacrament in Placentia,” Taylor said. “It will throw off $75,000 a year to start for all of the ministries at Blessed Sacrament.”

Affordable housing projects are also underway at St. Joseph, Buena Park, and St. Michael’s Outreach Center in Riverside, and at least 30 churches have land available for such use. “The goal is to have enough revenue to pay essentially for the church’s clergy going forward for the next 40 to 50 years,” Taylor said.

Consolidated ministries with shared resources are happening in the Inland Empire, among Trinity, Redlands; St. Stephen’s, Beaumont; and St. Alban’s, Yucaipa, he said.

“Ministry won’t have to look like it does in 2022 to be effective in 2032 and 2042. We’re just committed to never abandoning the neighborhoods where Episcopalians are glorifying God and caring for God’s people right now.”

Representatives of both the Corporation of the Diocese and the Standing Committee reported the diocesan bodies had approved a site license agreement for a cell tower at St. Francis, San Bernardino; and an amended agreement and other changes for the St. John’s Cathedral redevelopment project.

Additionally, the Corporation at its Aug. 16 meeting agreed to attempt to manage expenses by withholding 5% of the total 2022 income raised by Seeds of Hope and IRIS on Dec. 21, 2022 in a way not to violate any grant or contract agreements. That amount will be raised to 10% in 2023.

Christine Budzowski, president of the diocesan Episcopal Church Women, reported that author and retreat leader Kay Lindahl will present “Listening as Sacred Art and Spiritual Practice” from 9 a.m. to 12 noon, at the online Daughters of the King Fall Assembly Oct. 22. The assembly is open to anyone who would like to attend.

The Rev. Canon Mary Crist, who serves at St. Michael’s, Riverside, and as Indigenous Theological Coordinator for The Episcopal Church, was to be honored Sept. 10 as one of the Province VIII Distinguished Women during an online annual provincial ECW gathering. The Rev. Rachel Taber Hamilton, vice president of the House of Deputies, was to be present to welcome new board members.

Convention coordinator Samantha Wylie reported on behalf of Secretary of Convention Canon Steve Nishibayashi that links to hotel rooms and delegate registration are available on the convention website, which was recently updated with a new URL, https://diocesela.org/convention/. Keynote speaker for the Nov. 11 – 12 “Back to the Holy City: the Hope of Christ in our Time”-themed hybrid gathering at the Riverside Convention Center will be Jerusalem Archbishop Hosam Naoum.

About 84% of 2021 parochial reports have been received; only a handful of annual audits were submitted by the Sept. 1 deadline, Wylie said.

Canon to the Ordinary the Rev. Melissa McCarthy reported that diocesan staff Eucharists have resumed at St. Paul’s Commons at 11:30 a.m. on Thursday mornings with rotating celebrants. All are welcome to attend and stay for lunch. Lunches are about $12 and may be ordered in advance by contacting Canon Gail Urquidi.

Taylor also reported an invitation “back in from the wilderness” for progressive churches like The Episcopal Church at the Lambeth Conference, held July 26 to Aug. 8 in Canterbury, England. Archbishop of Canterbury Justin Welby said he would no longer exclude or sanction any churches for upholding marriage equality and other LGBTQ+ justice issues.

“It wasn’t unity for the sake of unity,” Taylor said. “It was unity for the sake of keeping the Anglican Communion together to address many of the issues that in our agonized world require the concerted effort of Anglicans and Episcopalians in 165 countries. One could feel the tension leave the room.”

A 10 a.m., Saturday, Oct. 8 online town hall gathering in preparation for diocesan convention, featuring Muslim, Jewish and Christian representatives discussing Israel and Palestine. Anyone is interested in being a pilgrim in Israel and Palestine is invited to contact the bishop’s office (bishopsoffice@ladiocese.org).

Taylor said his hopes for 2023 include interfaith and ecumenical partnership advocacy efforts concerning the Men’s Central Jail in Los Angeles, and a diocesan focus on racial reconciliation and reckoning.