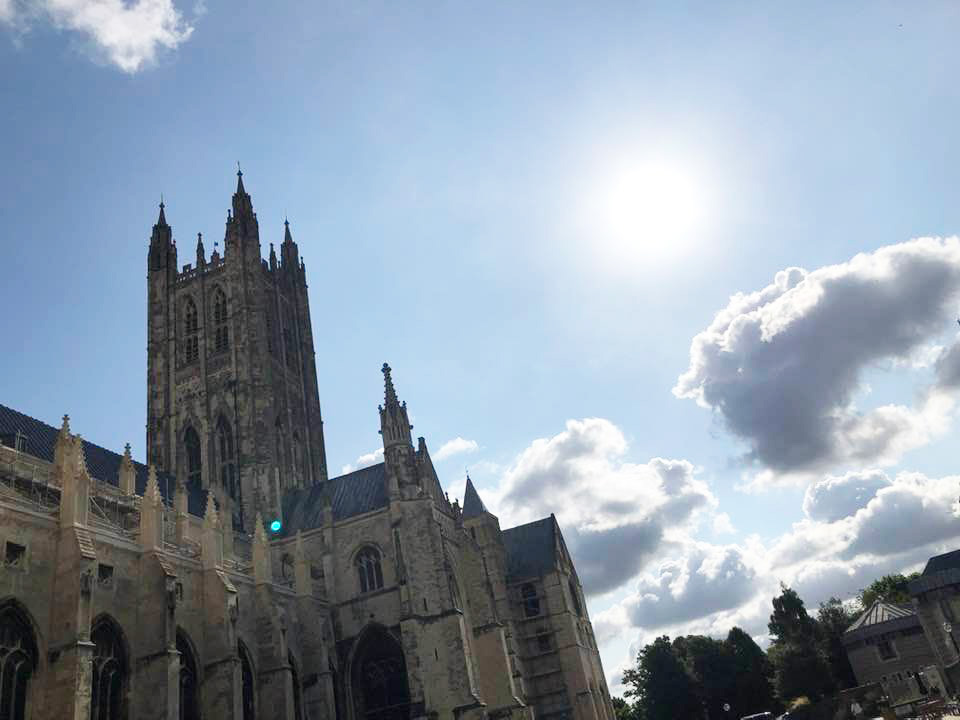 Canterbury Cathedral, as photographed by Bishop John Harvey Taylor, who visited the historic site before the beginning of the 15th decennial Lambeth Conference.

[The Episcopal News] Controversy and some quick maneuvering marked the beginning of the 15th Lambeth Conference of Anglican and Episcopal Church bishops, which opened July 27 at the University of Kent and Canterbury Cathedral in England and will conclude August 8.

Bishop John Harvey Taylor is attending along with bishops from around the Anglican Communion. Lambeth Conferences began in 1867 and usually meet about every 10 years; the last meeting was in 2008. The present conference was rescheduled from 2018 due to several factors, including the coronavirus pandemic.

Conference organizers, including Archbishop of Canterbury Justin Welby, who is hosting the meeting, promoted the gathering as a time of conversation and unity, based on close readings of scripture and dealing with subjects of worldwide interest and concern, such as climate change, political strife and human rights.

“The aim of this conference – which, like all the [Lambeth] conferences, is a very significant moment in the life of the community – is to encourage Anglicans around the world to be looking outwards to the world,” Archbishop of Canterbury Justin Welby said at a press conference on June 22 (as quoted by Episcopal News Service). “The church should express its mission and its life of discipleship through engagement with the great challenges that the next 30 or 40 years will impose upon the vast majority of Anglicans, especially those in areas of climate fragility, and political and other fragility.” The ENS article on the conference, titled “Archbishop of Canterbury, Lambeth Conference planners set tone of unity over division for upcoming summer gathering,” is here.

But about a week before more than 650 bishops and some of their spouses began to travel to the meeting, controversy erupted when it became known that organizers would be asking bishops to vote on several “Lambeth Calls” – a kind of resolution without legal or canonical force, but potentially of great influence. One of these calls, under the heading of “Human Dignity,” would ask them to reaffirm a 1998 Lambeth resolution (known as “I.10”) declaring that only marriage between a man and a woman is recognized in Anglican/Episcopal theology.

According to the Lambeth Call document delivered to participants, the bishops would be able to vote either that they affirmed this stance, or that the issue requires more study. There was no way to vote “no.”

Bishop John Harvey Taylor was one of the first to publicly express anger and disappointment at what he called a “bait-and-switch” after he learned of it from neighboring Bishop Susan Brown Snook of the Diocese of San Diego.

“You think it’s hot in London this week? Wait until next week in Canterbury,” Taylor wrote on Facebook and in his blog post on July 20, referring both to a recent European heat wave and to the increasing fury expressed by Anglicans and Episcopalians from the United States, Scotland and other provinces that accept and celebrate same-sex unions or are moving in that direction.

“In the year-long run-up to this summer’s gathering, planners have been cooing in our ears about fellowship and diligent study of 1 Peter which Archbishop Welby selected as our text,” wrote Taylor. “It would be, we were told, a time of gracious reconciliation and relationship-building.”

Instead, he said, the bishops would be asked to affirm “Lambeth’s notorious, communion-rivening statement in 1998, known as Lambeth I.10, that biblical marriage can only be between a man and a woman. If we don’t vote yes, we can vote that a question needs more discernment. As of now, we won’t be able to stand up decisively for people’s God-given human rights and vote no.

“The word is spreading quickly that the Kumbaya Lambeth is actually a bait-and-switch Lambeth, with moderate and progressive Anglicans and Episcopalians about to arrive in Canterbury as credulous props for what is likely to be a majority vote against marriage equity,” he continued.

Dozens of bishops and others echoed Taylor’s objections. (A roundup of these statements, compiled by the LGBTQ+ ministry of the Diocese of Los Angeles, is here.)

Lambeth organizers quickly softened the language of the related call and revised the system to allow for a “no” vote. They “significantly rewrote part of the preparatory “Lambeth Calls” document, eliminating language from an earlier draft that had affirmed a 24-year-old resolution opposing same-sex marriage,” according to an ENS story. For each call, they announced, bishops may now choose from these options:

Taylor expressed cautious relief at the change in a July 25 post: “Perhaps it’s me, but I hear a whisper of hope from the Holy Spirit,” he wrote.

A discussion of the altered call by the Rev. Canon Susan Russell, canon for Engagement Across Difference for the Diocese of Los Angeles, is here.

According to the published Lambeth schedule, discussion of the Human Dignity call is set for Tuesday, Aug. 2.

The controversy over the Lambeth 1.10 call follows an earlier incident involving same-sex unions at the meeting.

Before the Lambeth Conference was postponed from 2020 due to the coronavirus, Welby announced that while spouses of bishops were welcome, same-sex spouses and partners were specifically disinvited. At the time only two bishops in the Anglican Communion were in same-sex marriages. One of them is the Rt. Rev. Mary Glasspool, bishop assistant in the Diocese of New York and former bishop suffragan of the Diocese of Los Angeles. Her spouse, Becki Sander, was barred from the conference. In 2020, as the meeting begins, some six bishops and their spouses — four of them from the U.S.-based Episcopal Church – are affected.

The University of Kent, where the bishops are being housed, quickly announced that the uninvited spouses were welcome in their facilities. Welby and other organizers have so far relented that these spouses will be allowed to attend Lambeth worship, but they still are barred from most other official functions. Some of the disinvited spouses have chosen not to attend; others, including Sander, have already arrived and are taking part in non-official events, including a march for LGBTQ+ inclusion on July 27. (See an ENS account here.)

Recent articles about the Lambeth Conference from various sources are linked here.

Bishop Taylor’s blog, in which he continues to report on his experiences of the Lambeth Conference, may be read on Facebook and on the diocesan website here.