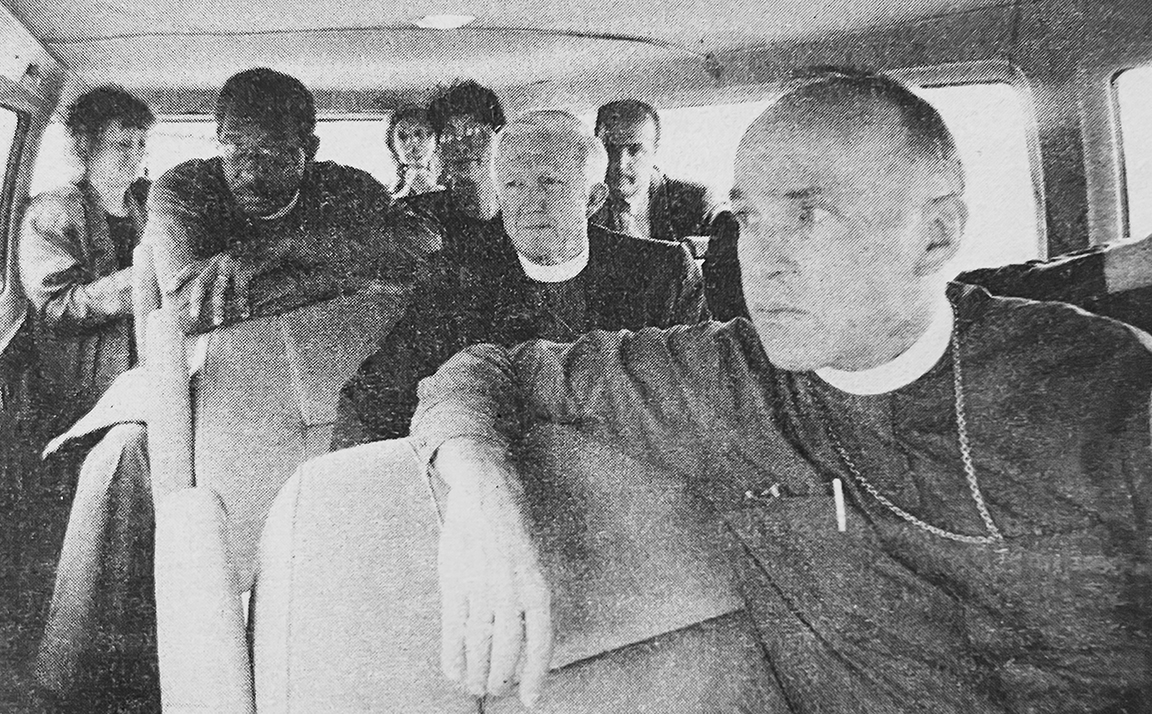 [The Episcopal News] Doing for others while they sorted out their own feelings summarizes the way Southland parishes coped with danger, anger, sorrow and fear after being engulfed by one of the worst urban riots in U.S. history.

Only two churches in the diocese sustained actual damage – St. Mary’s, Los Angeles (Mariposa), was broken into, and St. Timothy’s School in Compton was hit by bullets.

The Parish of St. Athanasius/St. Paul in Echo Park suffered the only casualty reported so far. A 19-year-old Salvadoran parishioner was killed by gunshot wounds. “He was just in the wrong place at the wrong time,” said Rector J. Jon Bruno. “He was on his way home from work when he became one of the 58 people to die in the violence.”

The youth had come to the United States to live with his older brother’s family, parish members. The family has asked that their names be withheld.

Through a gift from St. James, Newport Beach, and assistance from the Echo Park parish-related service agency, El Centro del Pueblo, the Parish of St. Athanasius/St. Paul arranged to return the youth’s body to his mother in El Salvador and to pay for burial.

While the parishes interviewed here were located in the midst of the violence, members of many other parishes also suffered losses – it is still too soon to know how many.

For example, the medical offices of Dr. Kenesaw Mannings, located north of Inglewood, were burned and his medical records destroyed. Mannings, who is black, is a member of St. Cross Church in Hermosa Beach.

At Trinity Parish, near Hollywood, the shoe store owned by a Guatemalan family was burned. Rector William Thigpen said the parish is trying to help the family find a way to sell about 500 pairs of shoes which were salvaged.

“We had a short service and we started cooking,” says Germaine Love, describing her Compton parish Sunday morning, May 3. Love is altar guild director at St. Timothy’s and office manager for the adjoining St. Timothy’s School.

St. Timothy’s Manor, a parish-sponsored senior housing facility across the street, had lost food during a two-and-a-half-say power outage suffered by the neighborhood. Following the service, the women and men of the primarily black parish brought the manor’s 132 residents a hot dinner. Later, a parishioner on the faculty of Compton College arranged for a college van to help the Manor residents shop and bank, since nearby stores were closed.

On Thursday, the second day of the rioting, bullets ripped through windows and doors of St. Timothy’s School. Fortunately the school had been closed and its 85 youngsters were not there and Love was not at her desk, where the bullets might have struck her.

Regular daily sessions to “get the children’s viewpoints” have been instituted by the school, says St. Timothy’s senior warden, Jackie McLeod. Funds will be needed to repair the school, according to Love, and to help local families keep their children enrolled in St. Timothy’s as unemployment rises due to the many businesses damaged or destroyed.

All of the parishes interviewed, like St. Timothy’s, contacted parishioners and found no injuries or serious property losses and all have expanded existing food programs to help local residents.

Church of the Advent

The full effects of the Los Angeles riots will be a long time coming to light, according to Canon Lewis Bohler, rector of Church of the Advent, near La Brea and the Santa Monica Freeway.

“I asked on the first Sunday who had been affected and I saw hands go up,” he says, “but as time goes by, I expect to discover many more.”

For example, an 84-year-old parishioner, whose hand did not go up, later discovered that a large part of her wardrobe was lost in a burned-out cleaners. Many parishioners worked a Fedco store which was destroyed; others were associated with the damaged black-owned bank, Broadway Federal.

“The main thing in my parish is the shock the people are in, especially the American-born blacks,” says Bohler. “He plans to bring in a team from Los Angeles County Mental Health Services to work with small groups of parishioners. “We are in a devastated war zone with buildings burned on every side,” Bohler says.

The parish has worked with the AME Church and other churches to provide food and transportation. Assistance has come from many sources, including St. Alban’s in Westwood, Campbell Hall Episcopal School in Studio City, and from as far away as Augusta, Ga. Bohler’s hometown, where a Presbyterian church sent a $100 check.

Catholics, Muslims and Jews all feel at home at Church of the Advent, says Bohler. One Muslim friend of the parish, a Bangladesh native, lost his store near the church. “We could see flames all around us on Thursday,” Bohler recalls. “I stood in front of our friend’s store and kept people off for two hours but as soon as I left, they torched it. I was the one who gave him the sad news.

The 85-year-old St. Mary’s (Mariposa), a largely Japanese parish near Vermont and Normandie, is in the heart of Koreatown. Many of its members are suffering effects of the riots. One family had a close relative hauled out of his car and murdered. A vestry member lost a dry-cleaning business.

As the violence began on Wednesday night, the church offices were broken into, resulting in small thefts and damage to doors. On Thursday, the neighborhood erupted in lootings and flames.

Refusing to leave, Rector Kathleen Cullinane remained at the church and rectory, staying in touch with parishioners by phone. Since the power was out, she worked by candlelight. “As ‘the light of the world,’ the church never lost power,” Michael Cunningham, church administrator, wrote in a moving article for the church bulletin.

During Thursday night, Cullinane received a call from the nearby Zen Center, warning her of flames leaping near the church. She ran outside and quickly turned a garden hose on a car burning near several wooden structures.

With heroic effort, the staff and parishioners will go the church ready for services Sunday, a long-planned “Africa Sunday.” About 75, nearly all of them Asians, were in attendance to hear a group of musicians from Uganda provide songs of praise for the offertory and post-communion.

A call for aid to South Central Los Angeles brought donations of $750, used to purchase groceries which parishioners delivered to First AME Church.

At St. John’s Parish, just north of the USC campus, the Mobil station on church property was looted, according to the Rev. Warner Traynham, rector. Julia Harris, mother of parishioner Michael Robinson, herself a member of Church of the Advent, lost her Pioneer Chicken restaurant in Vernon. Another member’s business was visited by looters who went away when they learned the business was black-owned.
Holy Faith Parish

Some members of Holy Faith in Inglewood had shootings outside their homes and many were kept on edge throughout the emergency by shootings and sirens. Since Rector Gary Commins was in New York when the crisis started, his assistant, the Rev. Josh Acton, began phoning church families. Commins returned Friday and assisted with the calls, reaching some 60 or 70 members of the black, white and Hispanic congregation.
Christ the Good Shepherd

Stacy Miller, senior warden at the predominantly black Parish of Christ the Good Shepherd on Vernon near Crenshaw, said a shopping area near the church was totally destroyed.

“We’re pulling together as a parish, gathering information about our families and getting additional volunteer help for our food closet,” she says. Church members were also concerned for the 141 seniors living in a nearby independent living facility sponsored by the parish.

Like his parishioners, Rector Kenneth Phillips of St. Philip‘s Parish, just east of the Coliseum, had to drive two or three miles to buy milk for his children following the Sunday service. The Church was not damaged, but several parishioners had their places of employment destroyed, and two lost cars at burned-out repair shops.

St. Philip’s has expanded its food program with assistance from All Saints, Beverly Hills, and other sources and is working closely with a nearby Baptist church to exchange supplied and information. To assess damage among church families, the parish activated a telephone tree.

In the aftermath of the violence, the rector says, thoughts at St. Philip’s have turned toward the possibility of the church as a multicultural center where black, Korean and Hispanic people might bridge cultural and social gaps.

Grocery stores only a few years north and south of St. Martin’s, Compton were totally destroyed. While no one in the largely black congregation reported loss of property, one member lost a check in a burned-out post office and most had difficulty obtaining food and cashing checks.

An after-school tutorial program proposed by St. Martin’s for middle school youth has been placed in jeopardy by the violence, says Rector Danana Mkhize. Plans to approach local business leaders for support have had to be dropped. Mhkize is also concerned about potential loss of funding for the summer programs for high school youth which St. Martin’s runs in cooperation with the Compton Youth Employment Program.

“To carry this program out, we may have to finance the staffing ourselves this year,” he comments, adding, “Finding summer jobs for young people is going to be especially difficult.”

Parishioners in the diocese’s Korean churches were especially hard hit by the upheavals in Los Angeles.

At. St. Nicholas Mission in Hollywood, four Korean families had their businesses destroyed or severely damaged by looting, according to the Rev. Stephen Kim, vicar. Businesses lost were a dry cleaning establishment in South Central Los Angeles, a general merchandise store in a Van Nuys swap meet, and a downtown luggage store.

The families are being helped through the Presiding Bishop’s Fund and the Bishop’s Discretionary Fund. Some parishioners have offered care and assistance directly by phoning the families and bringing them money and food. The mission has collected food and money for other Korean victims of the riots.

A liquor store owned by a Korean family at St. Francis, Norwalk, was completed looted. A shoe store owned by a family formerly in the mission, now attending St. David’s Parish in North Hollywood, was looted and burned. The family had purchased the shoe store, par of a South Central Los Angeles swap meet, only a month before the riots.

Wookung Lee’s market in South Central Los Angeles was burned, as was Jason Lew’s liquor store. A Koreatown jewelry store owned by Chung H. Pak and a gift and kitchen supply owned by Thomas Ahn near Vermont and Pico were both looted. Pak and Ahn are St. James parishioners.

Nearly $2,000 has been collected for these families through St. James’ Korean program. These funds will be augmented by $2,000 from the diocese.