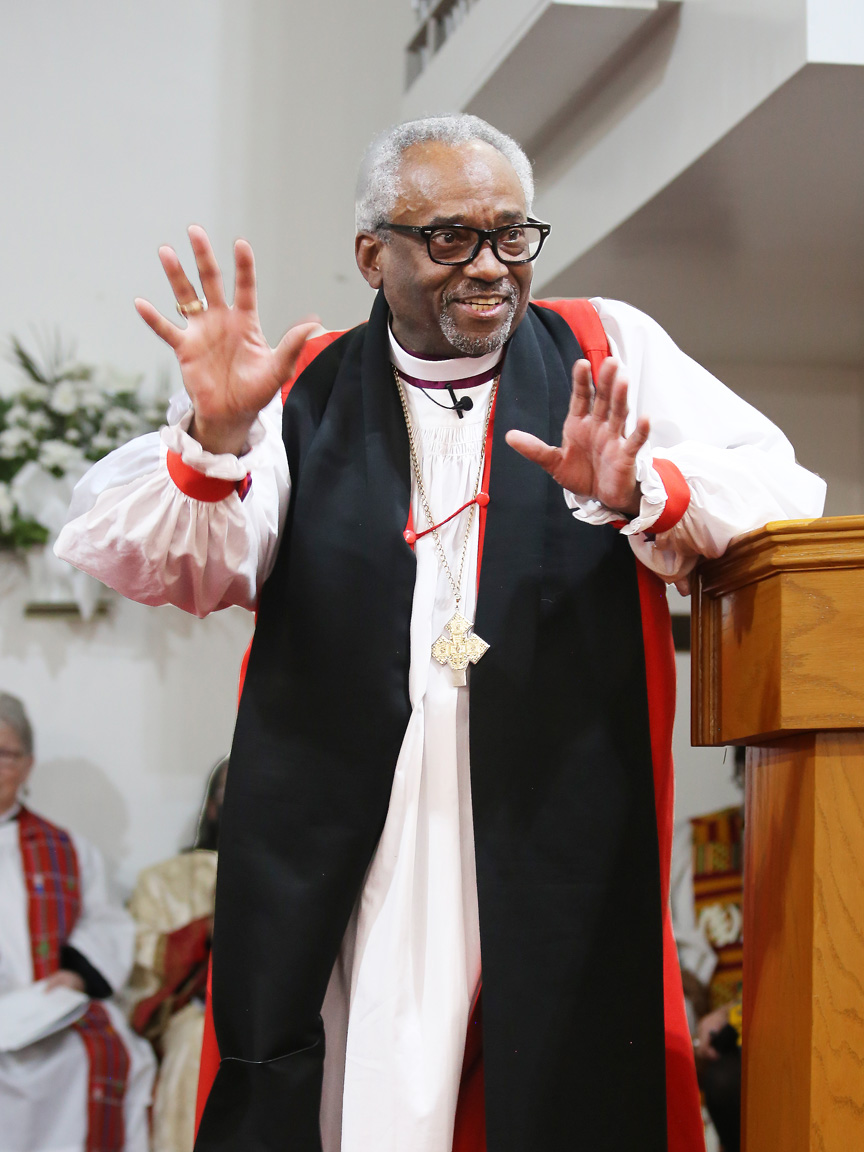 [The Episcopal News] Presiding Bishop Michael Curry, along with Bishop John Harvey Taylor and Mayor Karen Bass, issued a rousing call for housing and socioeconomic justice at the Jan. 15 annual King Day celebration in the Diocese of Los Angeles, where more than 40,000 are homeless and five people die daily on the streets.

Curry delivered a spirited “the power of love urges us on” revival message to hundreds of cheering and applauding ecumenical, church, civic, and community leaders who packed Christ the Good Shepherd Episcopal Church in the city’s historic Leimert Park neighborhood for the annual celebration, livestreamed here (Facebook) or here (YouTube)

“We gather to remember the memory and then live the legacy. We are here not only to commemorate the life and sacrifice of Martin Luther King but to commit ourselves anew to the cause of love and liberty and justice and compassion and humanity and goodness and truth, again,” Curry said amid applause and cheers. “A legacy is not lived by somebody after the person has passed on who gives it. All that is, is a dead end. A legacy must be lived.”

Taylor said the diocese, in embracing truth-telling and its own legacy of racism, is in part focused on housing equity, “which Dr. King was talking about over 60 years ago.” 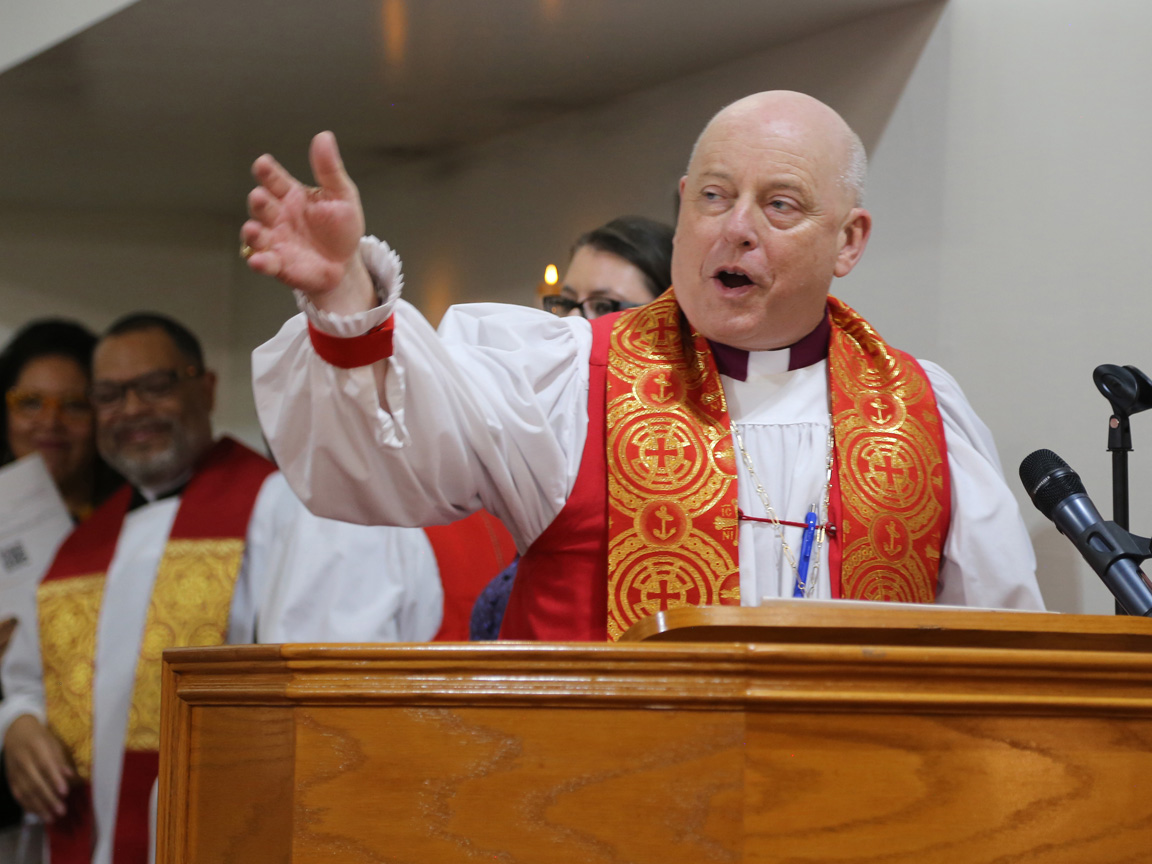 Bishop of Los Angeles John Harvey Taylor pledged that 25 percent of its churches would work toward building affordable housing on their campuses. Photo: Janet Kawamoto

Turning to Bass, he said: “One doesn’t get a chance to make a campaign promise to the mayor very often, but here goes: We have 128 churches, not just in your magnificent city but all over six counties in Southern and Central California. Homelessness is a regional crisis, and we’re committed to building affordable permanent supportive housing on 25 percent of our church campuses.”

Two such projects currently are under construction; one more will break ground in the summer, Taylor said. “There are 10 more on the drawing board. By your inspiration, and the light of Dr. King’s witness, as we follow the presiding bishop and by the grace of Almighty God, there are 20 more to come in the name of love.” 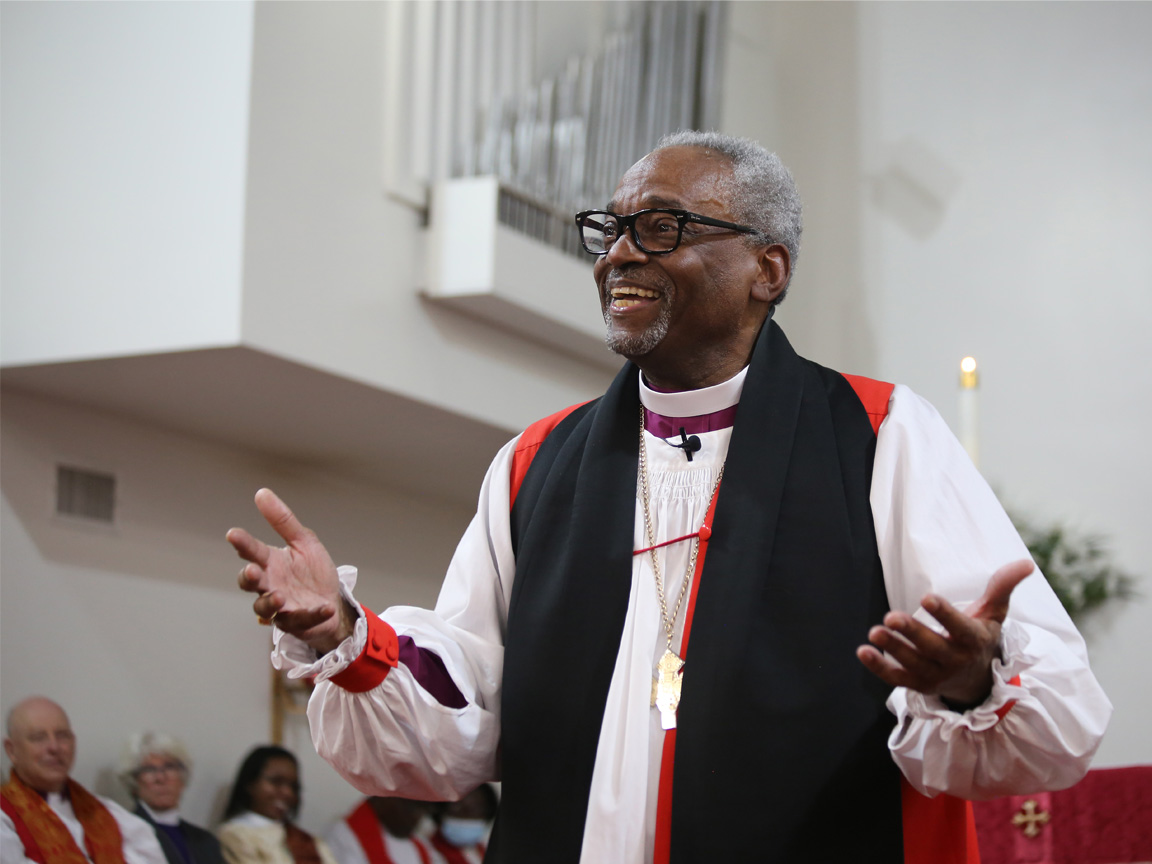 The chain reaction of love

His sermon was frequently interrupted by applause, laughter and cheers as he praised the soul-stirring music of The Episcopal Chorale, directed by Canon Chas Cheatham, and “the moral and spiritual leadership” of Taylor’s commitment to build affordable housing on 25 percent of diocesan church campuses.

“That’s a nice resolution for General Convention; just sayin’,” Curry quipped, amid laughter and cheers. “We pass a lot of resolutions, but this one is tangible. Thank you for that kind of moral and spiritual leadership, in the times in which we live.”

Such leadership is emblematic of the life of King, he added, preaching from St. Paul’s second letter to the Corinthians” (2 Corinthians 5:14). “’The love of Christ urges us on.’ You can’t just sit in the pew when the love of Christ is urging you on.” 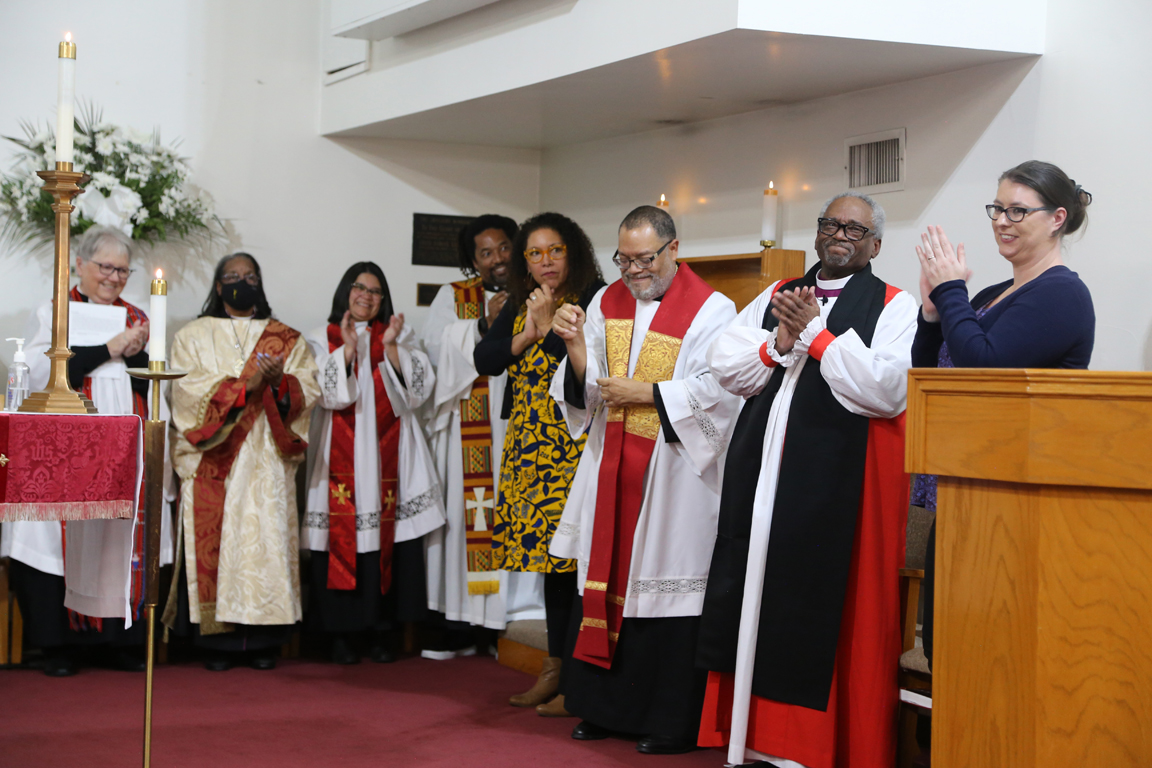 Quoting from the spiritual, “A Balm in Gilead,” he added: “There is a salve, a balm, that can help the division of our country, that can help us tell painful truths in ways that don’t simply hurt but that actually help and heal. That beckon us to learn from the past, to learn from those mistakes whatever they were, and then to join hands together across all of our differences, join hands together and build a new future. When the power of love overcomes the love of power, then the world will know peace.”

It boils down to an issue of faith, said Curry, “which is why I’m in church, because I need y’all. We need each other. That’s why I read the bible. Not really read, but wrestle with it, wrestle with it till you get the blessing … because God will not fail.” 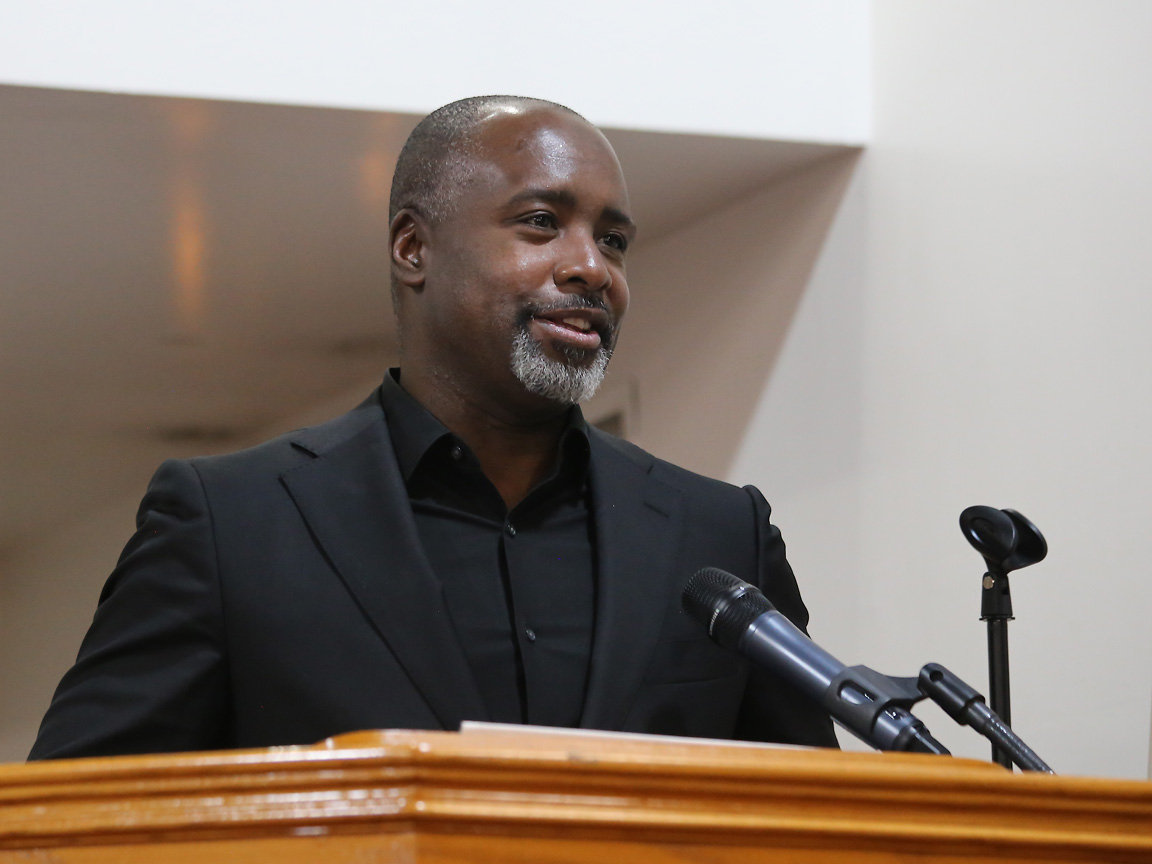 The gathering also became a celebration of the Black church, which has been on the forefront “of every important fight this country has had, whether women’s suffrage, civil rights, labor rights, economic justice,” said L.A. City District 8 councilmember Marqueece Harris Dawson.

“We recognize Christ the Good Shepherd for being the heart of our community and in every important fight,” he said, noting that in 1981 the church built the Good Shepherd Homes in nearby Inglewood, a 72-unit affordable housing complex for seniors.

“The Church of the Good Shepherd has led the way. We are happy you’re not just recognizing Dr. King the individual, but also recognizing the significance of the Black church,” he said amid applause. “Right now, we are in the fight of our lives to make sure human beings who live in the fourth largest economy on the entire globe can live indoors. We want to do everything we can to help us see our way to the other side where all of our neighbors live indoors.”

Canon Suzanne Edwards-Acton, co-chair of the diocesan Program Group on Black Ministries, which organized the event, told the gathering she is a great granddaughter of “the mother church, the historic African Episcopal Church of St. Thomas,” founded in Philadelphia by Absalom Jones, the first Black priest in The Episcopal Church. 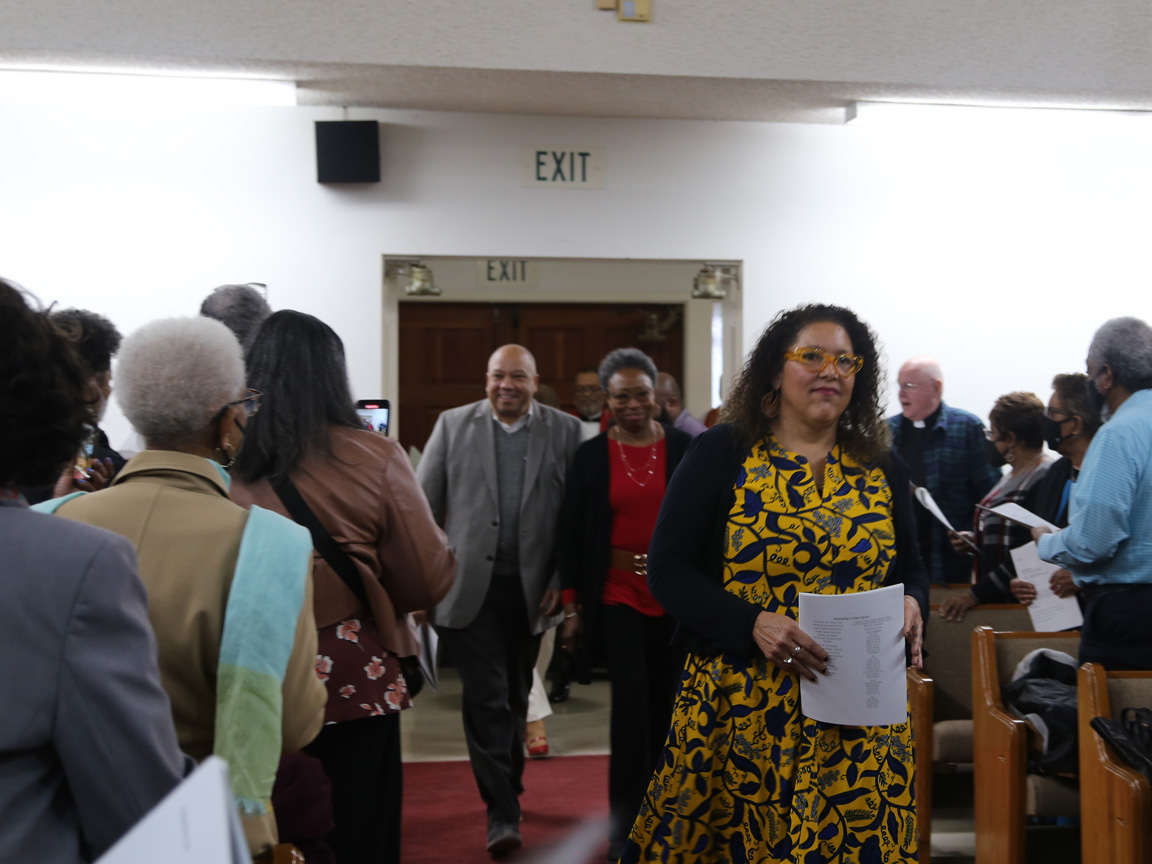 Canon Suzanne Edwards-Acton, co-chair of the Program Group on Black Ministries and organizer of the MLK event, enters the church with other service participants. Photo: Janet Kawamoto

“As I’ve gotten older, I’ve become more and more proud of that heritage,” she said. She invited the gathering to call upon the names of ancestors, of those unable to be present. ”This is something I learned from being part of the Union of Black Episcopalians, to name and bring our people here with us, when we come together. Who do you want to bring?” she said as a chorus of voices began called out names of loved ones.

Other congregations became predominantly Black after white flight from the city, he said, including Christ the Good Shepherd and Church of the Advent in Los Angeles; Holy Faith, Inglewood; Holy Communion, Gardena; and St. Timothy’s in Compton. 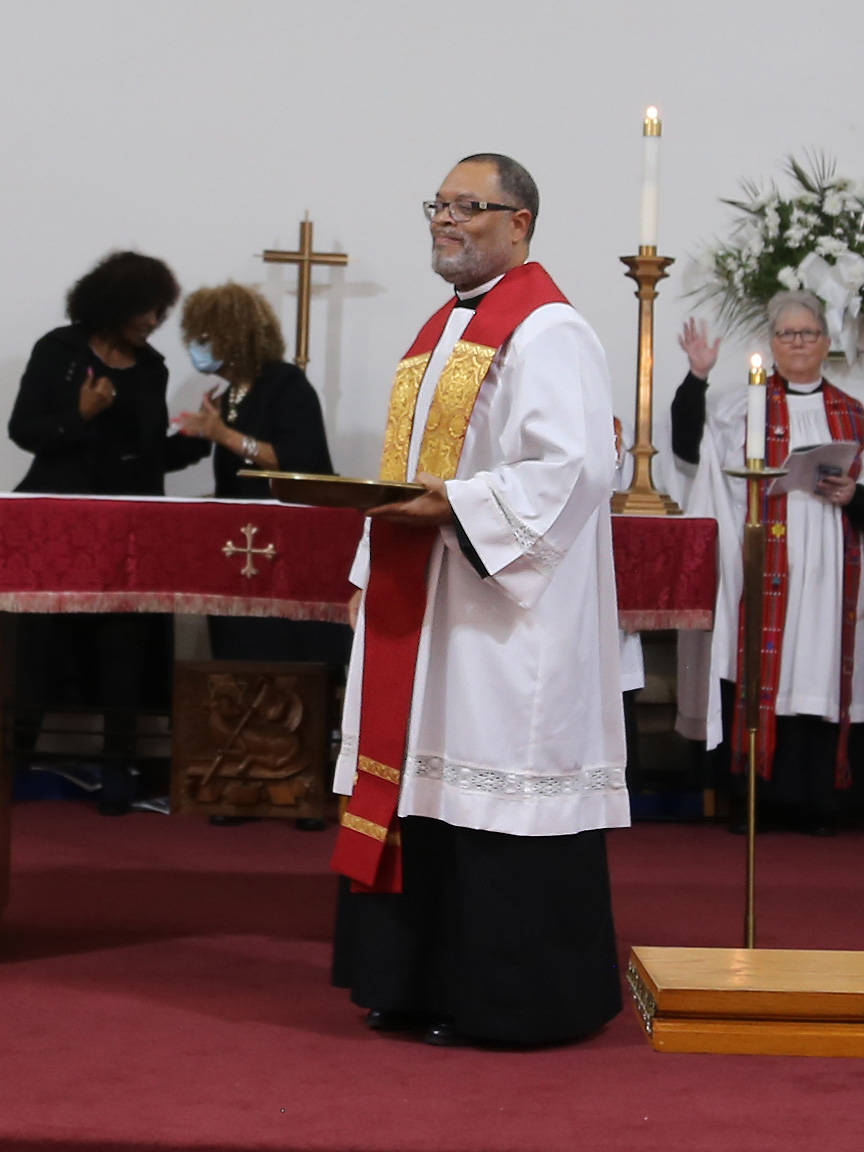 Guy Leemhuis of the Program Group on Black Ministries, served as master of ceremonies for the MLK event. Photo: Janet Kawamoto

“At one time, St. John’s Cathedral was a predominantly Black church with a Black rector. We have a history here. We hope we can find a new history as we go forward, and people can begin to live in the city together and not feel like when one group moves in, the other group has to move out,” he said.

Coining the word “invisabilizing … it means, for me, to intentionally make a group of people and their history invisible,” he added. “We do too much invisabilizing. So, today, we see you, beloved. Today, we hear you, beloved, and know that we are not letting you go gently into the night … because there’s work to do.”

“This should be our resurrection story, with a bishop diocesan committed to racial justice, to eradicating homelessness and racism, … to putting the money where his mouth is. Our resurrection story is upon us and our ministry and our call to God is in the right place.”

Citing Curry’s ‘Power of Love’ sermon during the marriage of Meghan Markle and Prince Harry of the United Kingdom, he added: “People are going to start looking at us. Like the day you preached at the royal wedding, presiding bishop, the most googled name was ‘Episcopalian.’ Let us continue that, from here on out.’ 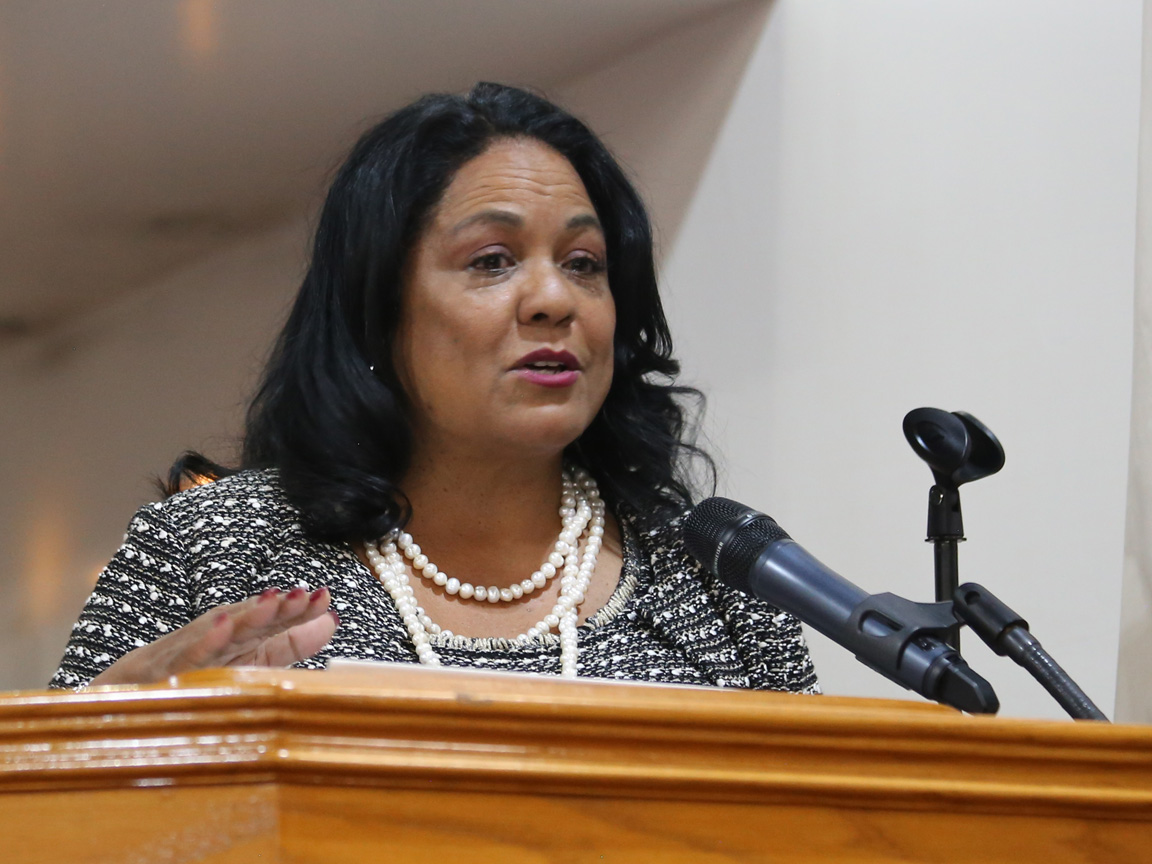 The Rev. Judy Baldwin, priest-in-charge at Christ the Good Shepherd also welcomed everyone to the 63-year-old church, formed by the merger of three local Episcopal Churches – St. Andrews (founded 1906), Good Shepherd (founded 1912) and Christ Chapel (1953). The current church was built in 1959.

Los Angeles District 10 councilmember Heather Hutt praised Christ the Good Shepherd Church and saluted Curry as the first African American presiding bishop. “I honor you for your remarkable accomplishments, for your leadership on racial reconciliation, social justice issues and the current housing crisis,” she said amid applause and cheers.

Turning to Taylor, she added: “Stable, affordable housing is necessary to achieve, and I’m here for that part, too. When you’re ready, let’s go. Thank you for fighting to preserve Dr King’s dream, for fighting for human rights and for showing us the power of love.” 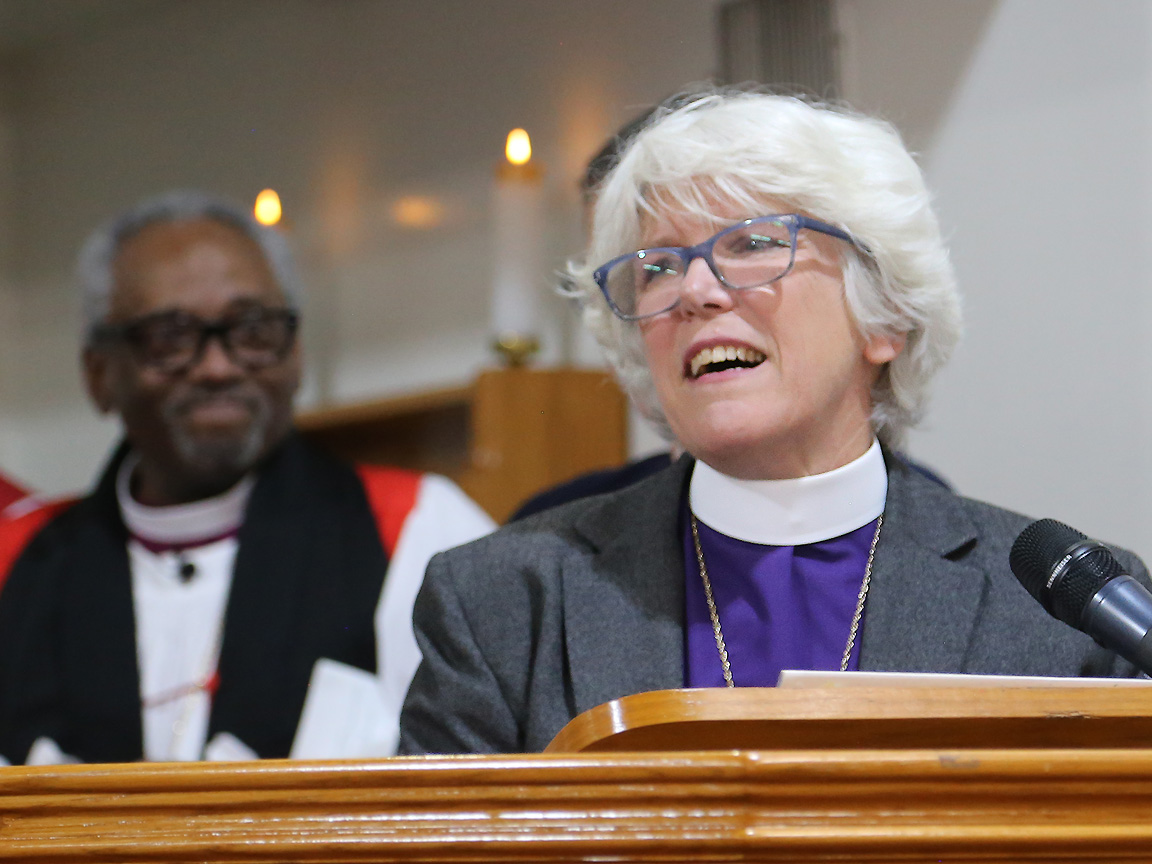 ELCA Pacifica Synod Bishop Brenda Bos addressed the gathering, recalling that when King “was protesting and marching, he and the other pastors would get together during the week and say, who can afford to get arrested this weekend? They would strategize whose worship could afford to be interrupted for justice. That’s what we need to do as a church now, to be willing to answer to justice … we must go out into the streets, into the world.”

Bass, who was sworn in Dec. 11, 2022, as Los Angeles’ first woman and second Black mayor by Vice President Kamala Harris, told the gathering federal and state help may be on the horizon. In the past few weeks, she said, more than 100 people have been moved off the streets and into motels, and soon will be place in permanent supportive housing. During a recent visit, former ambassador Susan Rice, currently director of the U.S. Domestic Policy Council, promised assistance.

She invited the congregation to “think about Dr. King, all he represented, and where he was at the end of his life, leading a poor people’s movement. Think about the movement he would be leading today. Could you imagine what would he think coming to Los Angeles and seeing 40,000 people on streets in tents everywhere, and learning that five people die every single day on our streets?” 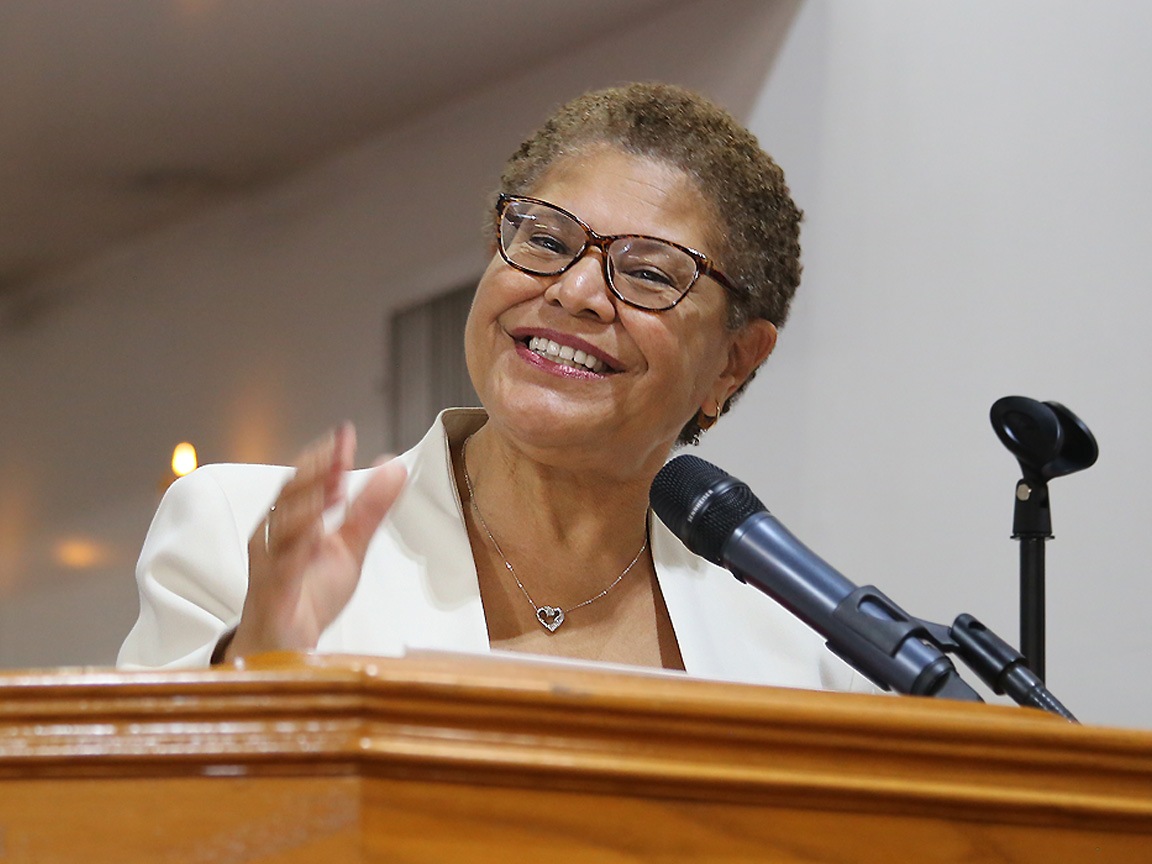 She committed to Taylor and “to this community, that there is nothing more important than bringing Angelenos inside. There is a generation of folks who think this was the way it always was. You and I know a couple of decades ago we didn’t even use the word homeless. To hear you are going to build housing; I can commit that all of us will do everything we can to make sure you get the help you need so that housing can be built.”

After the Biden administration announced a commitment to reducing homelessness by 25 percent, “we called them up, and said, you want to meet your goal? Come to Los Angeles,” Bass told the enthusiastic gathering. Similarly, she said, California Governor Gavin Newsom has invited both the city and county to help create a new system for mental health, “because we can no longer allow people to die on our streets and be profoundly ill.”

“The only way we’re going to rescue 40,000 people is to build the type of movement Dr. King died building, through an interfaith alliance,” the mayor continued. “No great movement starts without the church, without the faith community turning this movement into a moral crusade so that no one will say, ‘I want those people gone, but not in my neighborhood,’ ever again.”