‘This may be our finest hour,’ Presiding Bishop Curry tells Bishop’s Dinner gathering 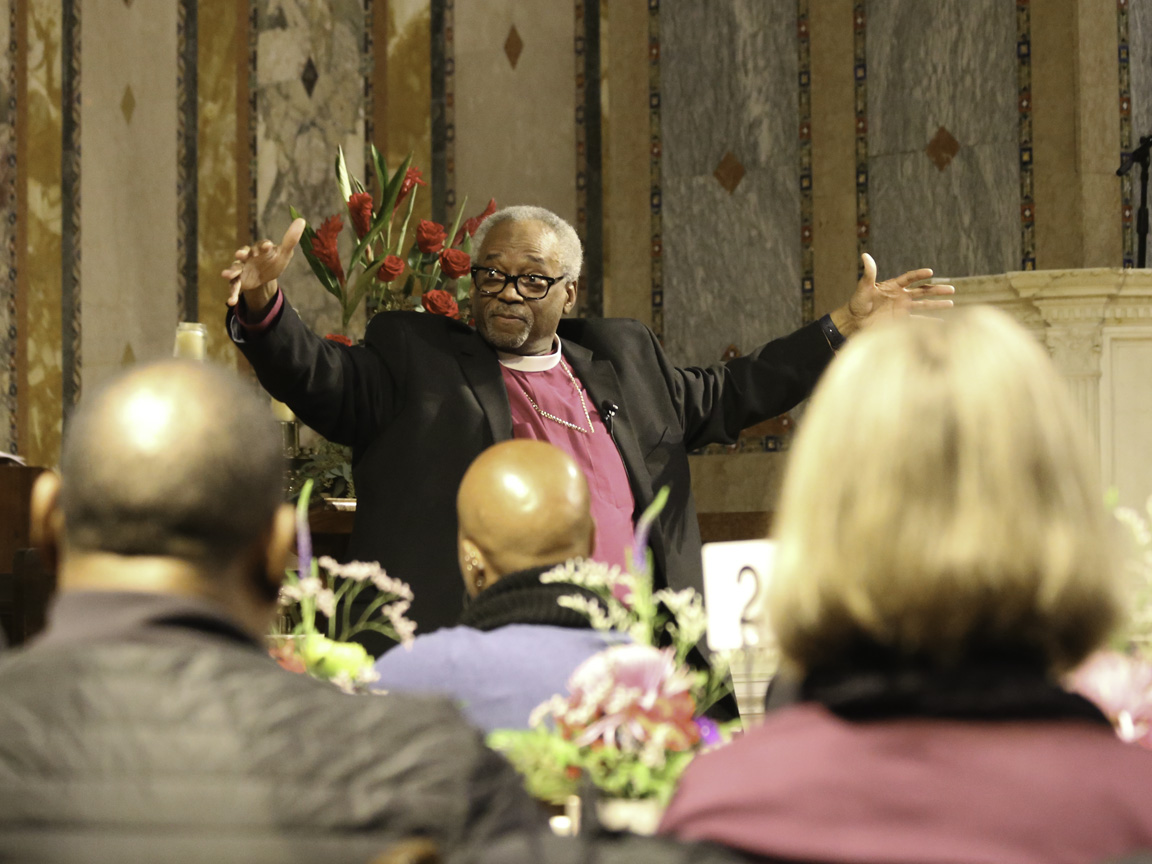 Presiding Bishop Michael Curry of The Episcopal Church was guest of honor and speaker at the annual Bishop’s Dinner in the Diocese of Los Angeles on Jan. 14. Photo: Janet Kawamoto

[The Episcopal News] Presiding Bishop Michael Curry galvanized hundreds of Episcopalians from across Southern and Central California who packed St. John’s Cathedral in Los Angeles for the Jan. 14 Bishop’s Dinner, invoking the image of a huge Ghanian tree with centuries-old root systems as a hopeful compass for living in globally challenging times.

“There is a Titanic – almost feels apocalyptic – struggle going on, not just for the soul of America, but the soul of humanity in this world,” Curry said. “I’m not depressed about … a moment such as this, a moment in which we are called to deeper engagement, of the values we hold, and of the faith that holds us. 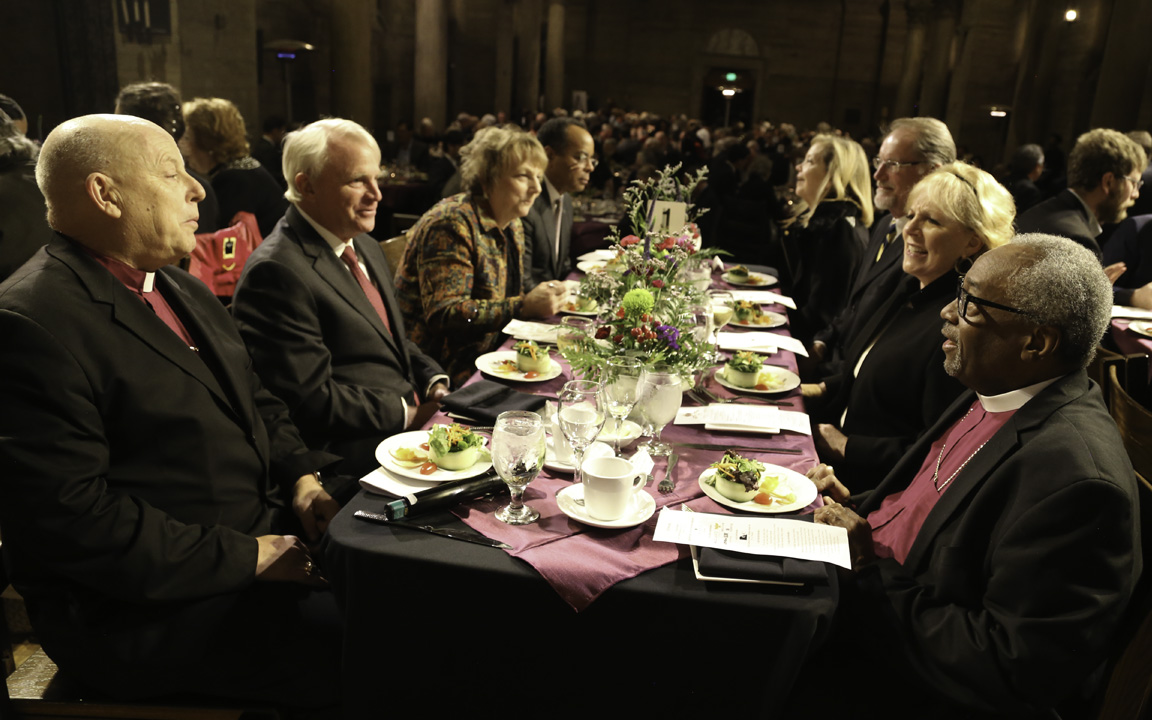 “It is an opportunity in the midst of difficulty, and it may well be hard times for democracy, hard times for Christianity that seeks to live authentically something close to the face of Jesus. And yet, if we engage this moment, this may be our finest hour.”

During a three-day visit to Los Angeles, Curry had met with local clergy and ordained five new priests at the cathedral, which later was transformed into a banquet hall for the Bishop’s Dinner, held this year in his honor. The event was sponsored and co-chaired by Allison Wrigley Rusack and Geoffrey Rusack, the son of Bishop Robert Rusack, the fourth bishop of Los Angeles, along with Quintin Primo III, whose father, Bishop Quintin Primo Jr., was the first bishop of African descent elected in the dioceses of Delaware and Chicago. Canon Kathy O’Connor organized the evening’s dinner and program, which raised funds for mission ministries in the Diocese of Los Angeles.

Curry, who was elected on the first ballot at General Convention 2015 in Salt Lake City, Utah, and ends his nine-year term in 2024, has given the church a renewed sense of direction and purpose, and “is the most important voice in 21st century Christianity,” Los Angeles Bishop John Harvey Taylor told the gathering. 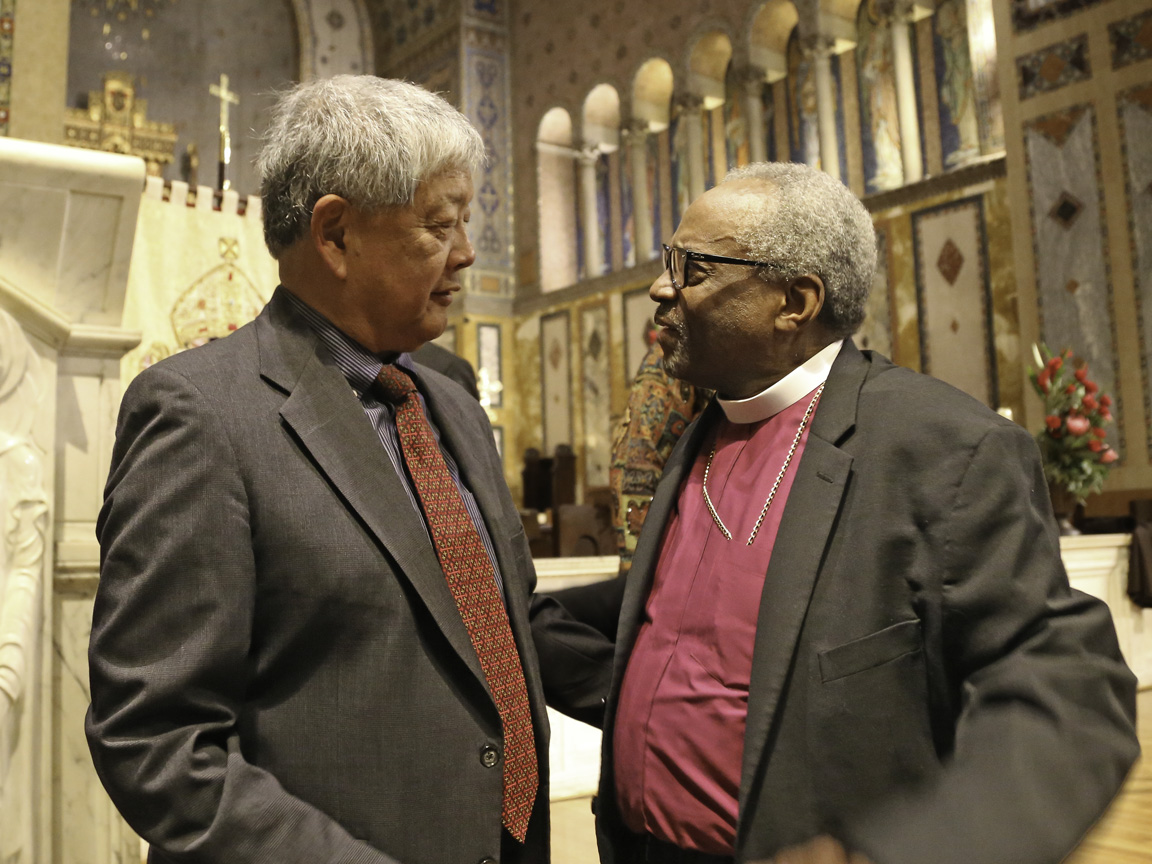 Canon Steven Nishibayashi, secretary of convention for the Diocese of Los Angeles, greets Presiding Bishop Curry, with whom he worked closely as a member of The Episcopal Church’s Executive Council. Nishibayashi now co-chairs the committee that will nominate Curry’s successor. Photo: Janet Kawamoto

Taylor cited Curry’s reconciling ministry with bishops across the Anglican Communion whose opposition to “justice for all people across all barriers of race, of orientation and identification seemed on the verge of marginalizing us.

“By virtue of his calm, steady, brilliant leadership, we have again staked out our ground as a church,” Taylor said amid vigorous clapping, cheers and a standing ovation. “We’ve reclaimed our heritage and our birthright, … and it’s about time because the broad Anglican view is vital, especially in the United States, to keep American Christianity from slipping further and further into the dark shadows of heresy.”

Canon Steve Nishibayashi, diocesan Secretary of Convention, and co-chair of the joint committee to nominate Curry’s successor, also praised his accomplishments, “myriad ministries,” and his emphasis on becoming beloved community.

“But we must remember that becoming the beloved community requires community efforts from a community willing to share its time, talent, and treasure,” Nishibayashi said.

Curry used images of trees – drawn from Scripture (Jeremiah 17:7-8), literature, and pilgrimages to Ghana, as well as spirituals – to return to his “Way of Love” theme and to offer hope in challenging times, of “how you live and stand with integrity, dignity, and a life saturated by eternity that not even death can take away from you – how you stand and live into the best of times and the worst of times and make this our finest hour.” 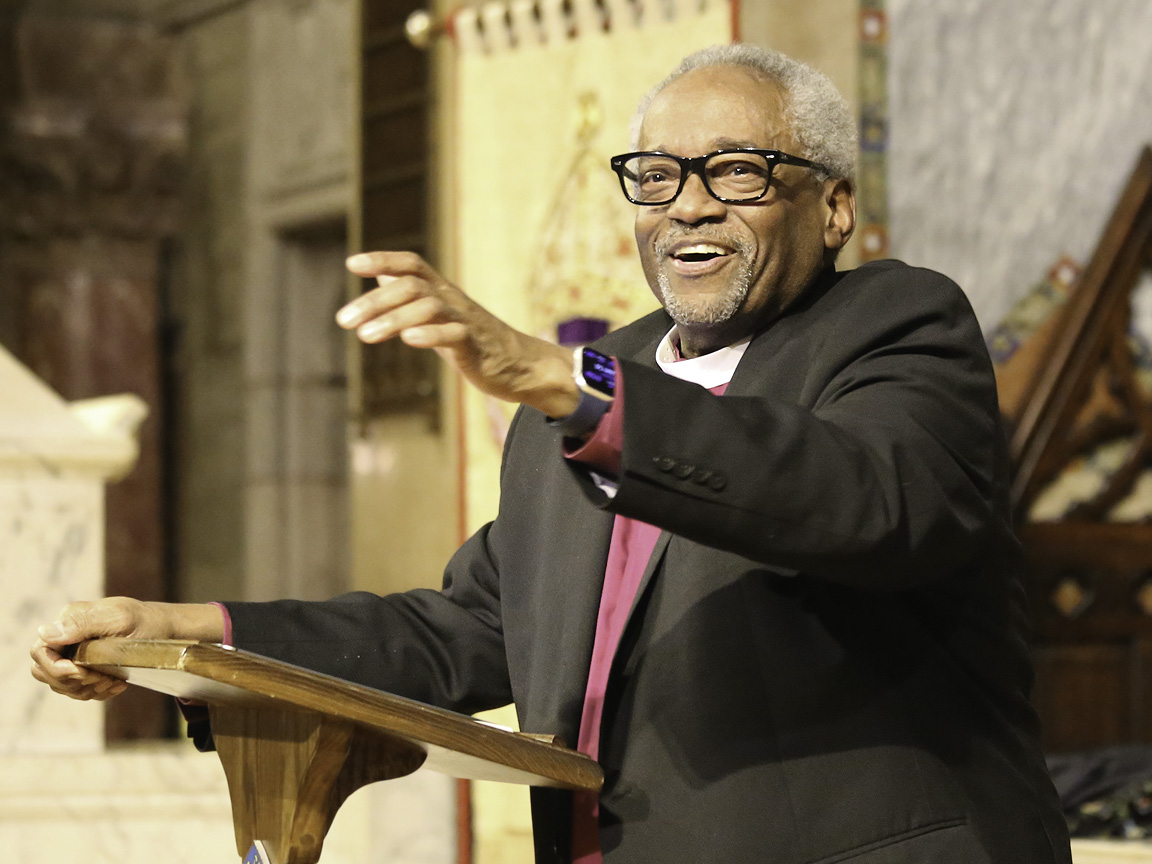 Curry cited the Old Testament prophet Jeremiah who was “living through a similarly complex age, a time in which the nation that he had known was in decay. We’re not in decay – we got issues, but we’re not there,” he said.

“His world was changing profoundly. Empires were rising; nations falling. It was a time of cataclysmic, almost apocalyptic change, and this is what Jeremiah said: ‘Blessed are those who trust in the Lord, who trust in the Lord. They shall be like a tree standing by water, sending out roots by the stream. It will not fear when heat comes, and its leaves will stay green. In the year of drought. It will not yield to anxiety, and it does not cease to bear fruit’.”

Recalling the poem “Trees” by Joyce Kilmer, the presiding bishop drew laughter and applause when reciting it, ad-libbing, “Poems and sermons are made by fools like me, but only God can make a tree.”

Curry said current struggles call Episcopalians to deeper engagement and renewed commitment to community, amid challenges for the institutional church and organized religion. The challenges are global, he added.

“It’s not just here in the United States, and it’s not just attributable to a global pandemic,” Curry said. “We’ve heard this from other bishops from around the world, that there is a rise of fundamentalism, the arrival of new forms of fascism, neo-fascism, a genuine struggle between the values, or the nihilism behind the forms of fascism, and democratic values, humane values.”

During a pilgrimage to Ghana a few years ago, “at one point we were at what had been a rest camp for those [slaves] captured inland and forced to march, on a long march, what our Indigenous brothers and sisters call the ‘Trail of Tears.’”

From the coast, those who had survived the march were shipped as slaves to places like Baltimore, Maryland; Charleston, South Carolina; the West Indies, Cuba, and parts of South America, he said.

And while local villagers couldn’t stop the slave trade, they didn’t directly participate in it and “they just kept telling the story. Truth telling, as painful as it is, can set us all free. That’s how we know and how historians and scholars authenticated what happened there.”

The endurance of an ancient tree inspired him, he said. A tree “with this huge root system that has incredible branches. There are birds – like families of birds – living up there, and all sorts of critters and things. It is just majestic.”

The tree dated from the Middle Ages, “during the kingdoms of Ghana, Songhai and Mali, great kingdoms with rulers and scholars, philosophy, and democratic as well as monarchical governments. That tree was there.” 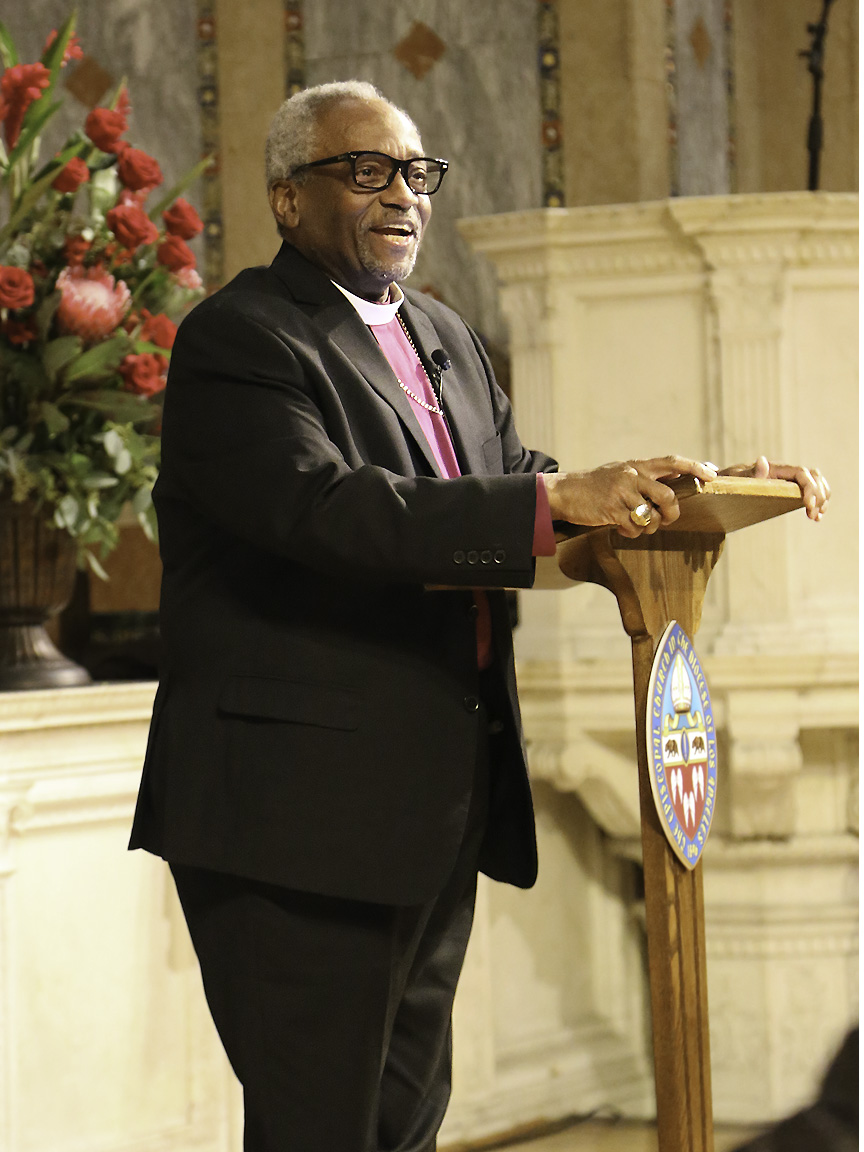 Captured slaves rested beneath it, and an Anglican chapel sat above it, Curry said. “People prayed with the 1662 prayer book while people were dying below. It was also there in 1958 when Dr. Kwame Nkrumah decreed that Ghana is now a free and independent nation to stand in the council of nations. And it was there when Barack Obama came to visit and kneel before that tree.”

The tree’s enormous root system had burrowed deep into the ground to find water, “and it has been finding it for centuries,” he recalled.

Although a nation divided, as the Jan. 6, 2022, attack on the capital indicated, focusing on what it means to be authentically human, to cultivate a simple faith, brings hope, for democracy and the future, he said.

“There are old racial wounds that have never been tended. You can hear it in the pain of people whose land was taken and stolen and a genocide that happened here, in this country that I love, as do you. Unhealed wounds. Gangrene sets in. The body politic gets sick. This could be our finest hour if we will reclaim the depth like the tree.”

The sentiment of the nation’s motto, E pluribus Unum – from many, one – “represents our highest aspirations, … who you say you strive to be. It’s your deepest self – seeking to come into being.” The phrase, attributed to Roman scholar and lawyer Cicero, reflected the makeup of Roman households, which extended beyond the nuclear family, to include servants, slaves and others, he said.

“They were not primarily constituted by nuclear blood ties. Cicero “said, ‘when each person loves the other as much as he loves himself, e pluribus unum becomes possible,” Curry said.

“My brothers and sisters, America will be America. When we learned what Jesus taught us, following the teachings of Moses, you shall love the Lord your God and your neighbor as yourself, this will be a nation of liberty and justice for all.

“When we learn to love each other, no matter who we are, then there will be plenty good room for all of God’s children in this country and in this world. Then we will take care of each other. Then we will learn how to lay down our sword and shields, down by the riverside and study war no more.” 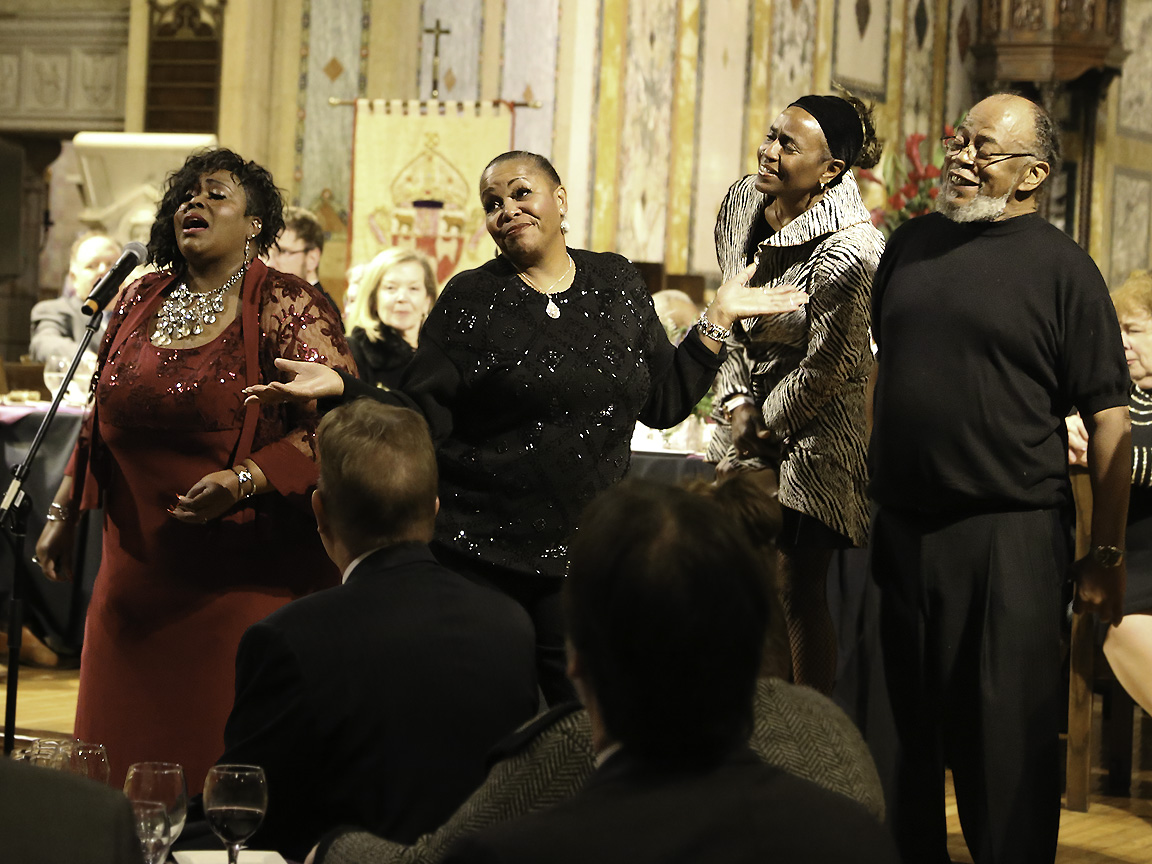 Members of the Episcopal Chorale delivered a story of Bishop Curry’s life and ministry, set to the tune of “Battle Hymn of the Republic.” Photo: Janet Kawamoto

Love is the way, he concluded. “When we and our Christian cousins and all the religions reclaim that as the core and essence of who we are as followers of Jesus, as people of God, and as human beings, that love is the way. It is the way to life itself because the source of life is the God who the Bible says is love. And I learned all that from a tree.”

Amid applause, laughter and standing ovations, he added, “Diocese of Los Angeles: walk together, children, and don’t you get weary. There’s a great camp meeting in the Promised Land, and this could well be our finest hour. God love you.”

The St. John’s Jazz Trio, directed by Zach Neufeld, offered musical entertainment, along with the Episcopal Chorale, an African American gospel choir directed by Canon Chas Cheatham. The Chorale serenaded Curry with a biographical rendition of his life and accomplishments, set to the tune of the Battle Hymn of the Republic.