The Blessings of These Days: A Pastoral Letter on the Church and Our Political Life 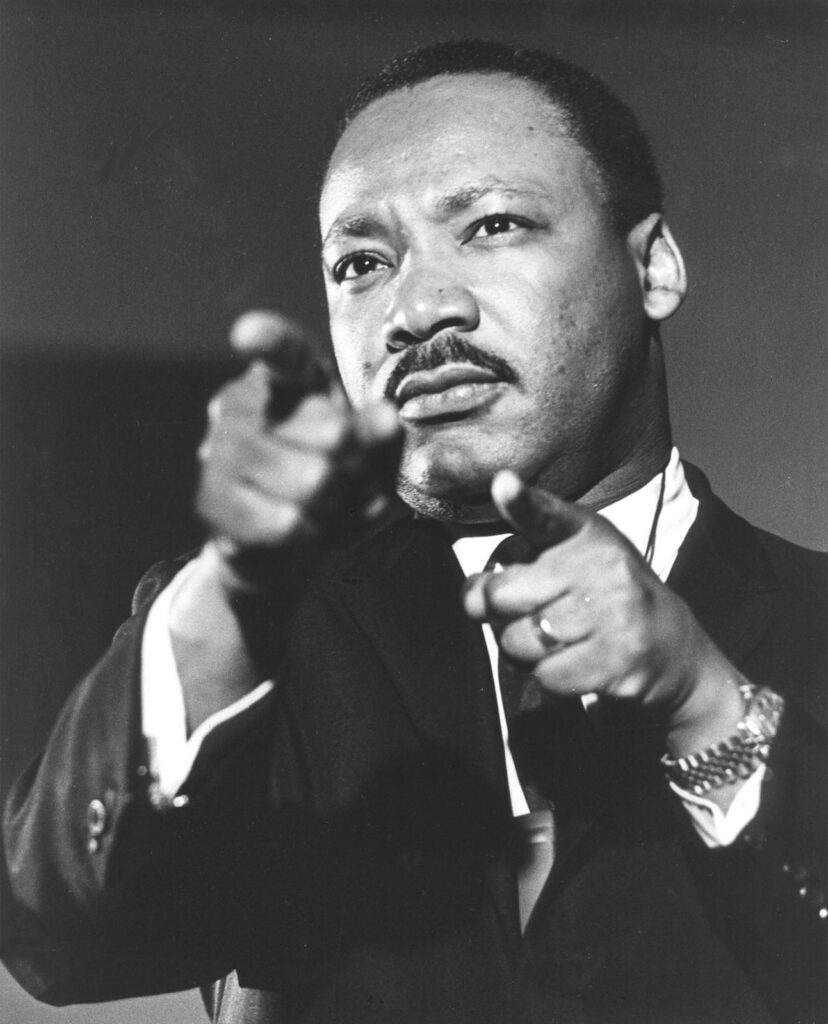 Over this long weekend, we’ve given thanks for the life of the Rev. Dr. Martin Luther King, Jr. and his teachings – his trinity of justice, love, and nonviolence – while praying for peace in all our state capitals and during the presidential inauguration on Wednesday.

Dr. King famously chastised the United States for not living up to our proclamation that all people are created equal. For nearly ten times longer than our nation has existed, the church has fallen short as well. In John’s gospel, we hear Jesus tell his Father, “I pray that they will all be one, just as you and I are one” (17:21, NLT). Yet we are still fractured along thousands of fault lines of sect and doctrine. Just ask two denominations, or even two parishes, that are grasping for Christian unity by trying to merge. It can be hard to do things differently or give up a little ground, and especially a little privilege, for the sake of our neighbor.

For us Christians, so too for us citizens. Many are calling for reconciliation before we have even learned the full story of the causes and consequences of the insurrection raised against the United States Congress on the feast of the Epiphany. The insurrectionists, almost all white, exhibited violent rage, including racial resentment and prejudice. Even after those responsible are brought to justice, a renewed sense of national unity is likely to remain elusive. Besides, “renewed” is not an especially useful word, since our prior episodes of unity or consensus occurred while millions of Americans were disenfranchised or marginalized – women, Blacks and other people of color, essential immigrant workers, and LGBTQ+ people.

Difficult as the work of accountability and reconciliation will be, our nation must do it if it is to thrive. We followers of the Risen Christ will play an indispensable role. In an August 1967 speech in Atlanta, Dr. King said that power without love is reckless and abusive, while love without power is sentimental and anemic. In this secularizing era, events have long since overtaken the shibboleth that true religion has no place in the public square. Who but people of faith will make sure that the exercise of power is guided by the law of love?

As faithful people, we are first neither Democrats nor Republicans. We join Presiding Bishop Michael Curry in the party of the way of love. We must bring our most hopeful selves to our ministry. In the anxiety of these days and weeks, may we remember, reencounter, and reembrace the optimism of the empty tomb. In my times of discouragement, I always find it helpful to count my blessings. Looking around the public square, I count at least three.

We have enjoyed the blessing of record voter turnout and a clear election outcome. Jesus said, “Give to the emperor the things that are the emperor’s” (Matt. 22:21). In a democratic republic, people give to government their consent and, when they choose, they revoke it. In November, nearly 67% of eligible voters cast ballots, the highest percentage in 120 years, encouraged both by the issues during a global pandemic and by reforms that made voting easier in most states. This is astonishingly good news for our country.

The outcome of this historic election expressed voters’ sacred will. Democratic and Republican officials in state governments and judges in courthouses affirmed the validity of the results. On Jan. 15, Bishop Bruce and I joined with our sibling bishops in the five other Episcopal dioceses in California in writing, “We honor the many thousands of election workers and officials of both parties who worked tirelessly, honestly, and at times in peril, to shepherd our nation through the election process.”

Our increasingly diverse electorate and elected leadership are blessings. In Galatians, Paul wrote about the pluralism of God: “There is no longer Jew or Greek, there is no longer slave or free, there is no longer male or female, for all of you are one in Christ Jesus” (3:28, NRSV). The gospel’s invitation to see the face of God in all people was almost impossibly radical in first-century Palestine. The sins of class, prejudice, and empire made life hard for almost everyone.

But even in his time, Jesus nevertheless wanted an abundant life for all people, “on earth as it is in heaven” (Matt. 6:10, NRSV). If we think Jesus isn’t interested in politics and policy, then we have to wonder how he expects those who serve God to effectuate the love in our hearts. By acts of personal grace and charity, of course – and in our time, such acts must include voting and making voting as easy as possible for everyone else so our leaders will exhibit the pluralism of the whole body.

That doesn’t make the government God or even God’s agent. It just keeps it from getting in God’s way by rendering people invisible or expendable to those who wield the state’s vast power. After all, Jesus came to affirm and extend the ministry of John the Baptist. When the crowds at the Jordan River asked John, “What then should we do?”, he gave them three rules: One about personal charity, and two about government officials, namely tax collectors and soldiers, behaving decently (Luke 3:10-14).

It is even a blessing to admit if change is hard. Torah records that, to those making their anxious way through the wilderness, God said this: “It is the Lord who goes before you. The Lord will be with you [and] will not fail you or forsake you. Do not fear or be dismayed” (Deut. 31:8, NRSV). While trusting in God’s providence in the midst of crisis and change is not always easy, we have recently received new warrant to do so. During the pandemic, our faith sustained us through changes in our worship practice that would have been unimaginable just a year ago. Told we would have to leave our churches behind and worship on our computers, we would have predicted that the church would not survive. And yet it has, because it is God’s church, and God needs it to continue the work of glorifying God and caring for God’s people.

By the same token, amid political transformation, some may be tempted by the fear that the movement of the democratic spirit won’t provide the leadership they prefer. Some may even feel that the United States is becoming unrecognizable to those who are used to its being a majority white, Judeo-Christian country. No matter what our beliefs, any one of us may be tempted to put our preferred outcomes ahead of the democratic process.

Perhaps these or other anxieties about political change have contributed to lingering skepticism about the election result. And yet we either believe in democracy, or we don’t. We trust in the genius of our constitutional system, or we don’t. We believe in the collective wisdom of a free people, or we don’t. We believe that God will sustain the nation if we honor our founding values, or we don’t. Our national creed, invoked by Dr. King, imperfectly observed for centuries, is that the more people vote, the more representative, responsive, and accountable government will be. The more people express their authentic hopes and fears by voting, the more a civic spirit blows across the land that is akin to the Holy Spirit.

If we’re afraid to trust in the movement of the civic spirit, we may find encouragement in Dr. King’s reflections during his last Sunday sermon, offered at Washington National Cathedral in March 1968. His words sound both theological and political. “We are tied together in the single garment of destiny, caught in an inescapable network of mutuality,” he said. “And whatever affects one directly affects all indirectly. For some strange reason I can never be what I ought to be until you are what you ought to be. And you can never be what you ought to be until I am what I ought to be.”

Or as Paul writes in Ephesians:

Speaking the truth in love, we must grow up in every way into him who is the head, into Christ, from whom the whole body, joined and knitted together by every ligament with which it is equipped, as each part is working properly, promotes the body’s growth in building itself up in love. (4:15-16, NRSV)

In the body politic today, our bonds, our ligaments, are strained, the fabric of our mutuality frayed. Amid crisis and change, we are tearing one another down instead of building one another up. In our families and parishes, we know what it feels like when people stop trusting one another, take up sides, and lose the capacity to understand the other side’s perspective. We experience just this kind of toxicity in our politics. We tend to demonize, objectify, and even dehumanize those who are different or who disagree.

At our Jan. 16 diocesan service for Dr. King, Bishop Curry renewed his call for a “cultivation of relationship across difference” – lowering our voices, listening to one another’s stories, and remembering that both we and those who are different and believe differently are beloved of God and made in God’s image for God’s purposes.

The Episcopal Church’s reconciliation ministry is called From Many, One: Conversations Across Difference. At the same time, our diocesan One in the Spirit initiative continues its work of expanding relationships and deepening connections across differences to strengthen our shared commitment to follow Jesus and do the transforming work of God’s love. We will have more to say about this work soon.

For now, let us give thanks for the birth and life of Dr. King and his vision of a beloved community, pray for a peaceful transition of power, and trust in the transformative work of the Holy Spirit and civic spirit, in our church and in our nation, in the days, weeks, months, and years ahead.

Almighty God, we humbly beseech thee that we may always prove ourselves a people mindful of thy favor and glad to do thy will. Bless our land with honorable industry, sound learning, and pure manners. Save us from violence, discord, and confusion; from pride and arrogance, and from every evil way. Defend our liberties, and fashion into one united people the multitudes brought hither out of many kindreds and tongues. Endue with the spirit of wisdom those to whom in thy Name we entrust the authority of government, that there may be justice and peace at home, and that, through obedience to thy law, we may show forth thy praise among the nations of the earth. In the time of prosperity, fill our hearts with thankfulness, and in the day of trouble, suffer not our trust in thee to fail; all which we ask through Jesus Christ our Lord. Amen.
— “A Prayer for Our Country,” The Book Of Common Prayer, p. 820