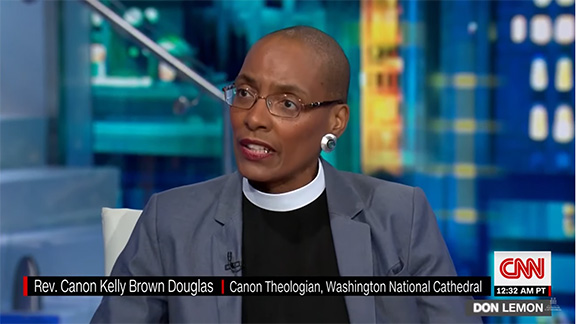 Canon Kelly Brown Douglas is interviewed by Don Lemon of CNN about an open letter to Donald Trump she wrote with Bishop Marianne Budde of the Diocese of Washington (D.C.) and Dean Randy Hollerith of Washington National Cathedral. The letter denounced Trump’s rhetoric toward people of color. 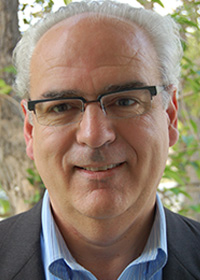 THE THIRD ANNUAL BISHOP’S DINNER will be held on Saturday, Nov. 2 in the nave of St. John’s Cathedral, Los Angeles. Keynote speaker will be the Rev. Kelly Brown Douglas, Ph.D., dean of Episcopal Divinity School at Union Theological Seminary, and canon theologian at Washington National Cathedral. The event will honor Joe Costa, president and chief executive officer of Hillsides, a service agency and diocesan institution that works with at-risk children and families.

Douglas is considered a leader in the field of womanist theology, racial reconciliation and sexuality and the black church. Prior to joining the Cathedral and EDS, she was the Susan D. Morgan Professor of Religion at Goucher College in Baltimore. Previously, she was associate professor of theology at Howard University School of Divinity (1987-2001) and assistant professor of religion at Edward Waters College (1986-1987). A native of Dayton, Ohio, Dr. Douglas was one of the first 10 black women to be ordained a priest in the Episcopal Church. She was an Associate Priest at Holy Comforter Episcopal Church in Washington, D.C. for more than 20 years. She holds degrees from Denison University and obtained her Ph.D. from Union Theological Seminary. Her newest book is Stand Your Ground: Black Bodies and the Justice of God, released in May 2015 by Orbis Books. She splits her time between New York and Washington. On July 30 Douglas, along with Bishop Marianne Edgar Budde of the Diocese of Washington and Dean Randy Hollerith of the cathedral issued a statement titled “Have We No Decency” as a rebuke to President Donald Trump for recent “unbridled speech” regarding several members of Congress and the city of Baltimore. Don Lemon of CNN interviewed Douglas after the release of that statement: the interview is here.

Joseph M. Costa, Hillsides’ president and chief executive officer, has served in this position since 2011, with the title of president added in 2017. During his tenure at Hillsides, Costa has used his expertise and experience to significantly expand its programs and services and to further cement Hillsides as a leader in the child welfare field. In 2016, he oversaw Hillsides’ affiliation with another respected child welfare agency, Bienvenidos. With this affiliation, Hillsides increased its presence in East Los Angeles and added a foster care and adoption program to increase permanency for children, extending its reach to serve 17,000 children, youth, and families in Southern California. Costa holds a bachelor’s degree in philosophy and social services, a master’s degree in divinity, and a master’s degree in social work.

Tickets to the Bishop’s Dinner are $150 each and may be purchased online here. Table sponsorships are also available. All proceeds from the Bishop’s Dinner will support the diocese’s ministries of worship and service. St. John’s Cathedral is located at 514 W. Adams Blvd., Los Angeles. Valet parking will be available.