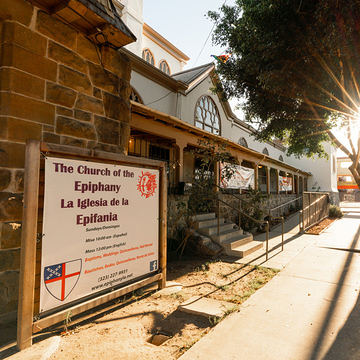 The Church of the Epiphany, a beloved landmark and architectural treasure, will collect $150,000 in preservation funding from the 2018 Partners in Preservation: Main Streets Program after winning enough votes — 74,272 of the 1,072,316 cast — to place fourth in a competition involving 20 historic sites nationwide. Sponsored by American Express and the National Trust for Historic Preservation, along with Main Street America, the program set aside $1.6 million in preservation funding for the historic sites receiving the most votes from the public during a one-month competition, which ended Oct. 26. Each of the 11 winning sites is eligible for a maximum grant of $150,000.

“We are grateful to American Express and the National Trust and for the outpouring of support from our parishioners, our local lawmakers, the media, the Latino and religious communities, and key partners in the campaign such as Los Angeles Conservancy, the Autry Museum, National Fund for Sacred Places and the Episcopal Diocese of Los Angeles, Bishop John Taylor and his terrific staff,” said the Rev. Tom Carey, vicar. “Because of their efforts and support, the church will be able to continue its vital social justice activism on behalf of the Latino community and provide important services such as health care and legal clinics for immigrants, refugees and our naturalized parishioners.”

The church will use the funding to repair a leaking roof, restore and add community rooms to its historic basement and upgrade the electrical, heating and cooling systems.

It will have a celebratory bilingual Thanksgiving mass at 10 a.m. on Sunday, Nov. 4; all are welcome.

The 20 competitors were chosen because of their role in the development of a more diverse nation. Each was allocated $20,000 at the outset of the campaign to increase public awareness of its importance and to build grassroots support.

Church of the Epiphany, the only Southern California site competing in the contest, is the oldest operating Episcopal Church in Los Angeles. It was designated as a Los Angeles Historic-Cultural Monument in 2005 by the City Council for its pivotal role in the Chicano civil rights movement of the 1960s. La Raza, an underground pro-Chicano newspaper, was operated from the church basement, which also served as a birthplace of the Brown Berets, Chicano activists who protested Vietnam, police brutality, educational discrimination and the mistreatment of farm workers. The church served as the L.A. headquarters for the United Farm Workers and as a planning base for both the 1968 East L.A. Chicano student walkouts and the 1970s Chicano Moratorium anti-Vietnam War protest, where former L.A. Times columnist Ruben Salazar was killed by LA County sheriff’s deputies.

Designed by English architect Ernest Coxhead and built in 1888, the original church was converted to a parish hall after a new sanctuary was erected in 1913 by architect Arthur Benton, resulting in a mix of historic styles that include Romanesque and Gothic Revival.

Escher GuneWardena Architecture Inc. of Los Angeles will oversee the restoration at the direction of the Epiphany Conservation Trust, a nonprofit organization founded in 2010 to raise money to restore the church. The firm has completed phase one, including restoration of the church’s stained glass windows.

In addition to housing the People’s History Project, the renovated basement will become home to the legal and health care clinics held regularly at the church. Every Sunday afternoon, Epiphany sponsors a pro bono attorney who helps individuals and families navigate the immigration system. In addition, the church partners with Eviction Defense Network to provide legal advice to residents who face eviction as a result of the gentrification of East Los Angeles.

Epiphany clergy regularly accompany immigrants facing deportation to court hearings, have been arrested at detention centers for protesting inhumane immigration policies, host an ongoing support group for refugees who have been seriously injured on their way to the U.S., and regularly appeal to city officials on issues ranging from homelessness to affordable housing.