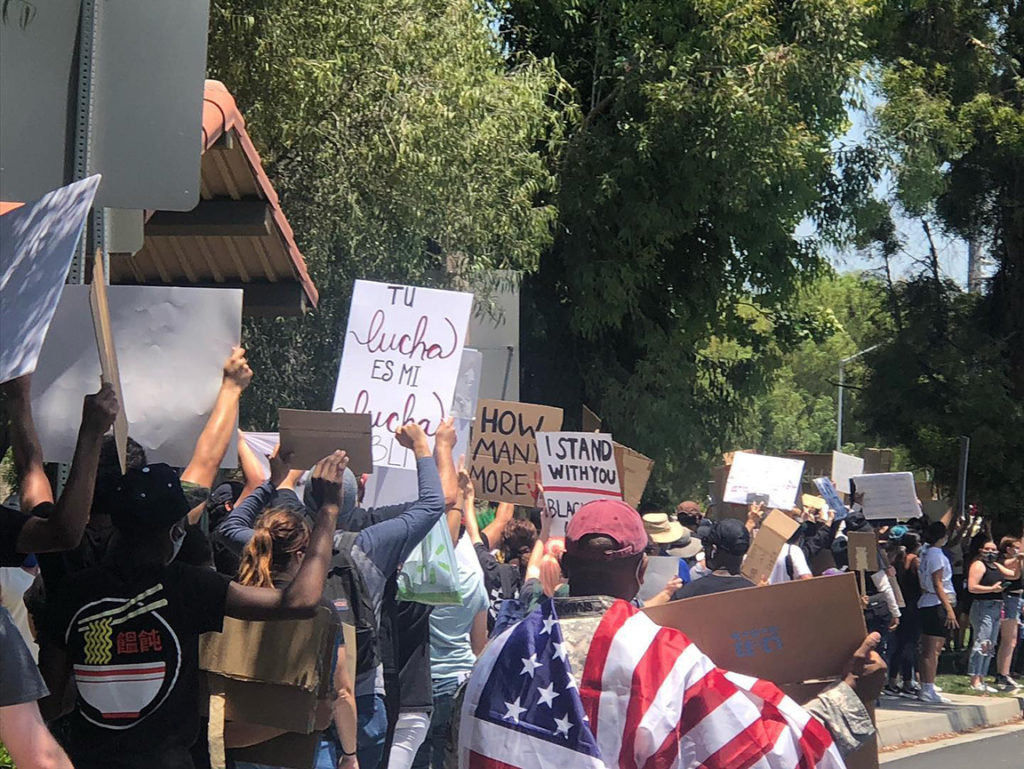 From Ojai to Santa Clarita to Covina, Southland Episcopalians have joined the groundswell of protests and cries for justice following the death of George Floyd, an unarmed black man, at the hands of police in Minneapolis, Minnesota.

The Rev. Canon Jaime Edwards-Acton, co-chair of the Episcopal Sacred Resistance Task Force of the Diocese of Los Angeles said the community is invited to attend a Monday, June 8 memorial service for Floyd and others killed by police.

The service, organized by Black Lives Matter-L.A., Clergy and Laity United for Economic Justice or CLUE and others, is themed “Today We Mourn; Tomorrow We Fight.”

The processions will converge for a 12 p.m. service at 1st Street and Broadway Blvd. in Los Angeles.

Floyd died May 25, after saying repeatedly, “I can’t breathe” as police officer Derek Chauvin pinned him to the ground for more than 8 minutes, a knee to his neck. Chauvin faces a second-degree murder charge and three other officers were charged
June 3 with aiding and abetting murder in connection with Floyd’s death.

The protests have swept the country and spread worldwide.

The June 8 Los Angeles memorial service is expected to draw interfaith leaders, labor representatives and community members. It will be held the same day as a memorial service for Floyd in his Houston, Texas hometown, where he will be laid to rest. 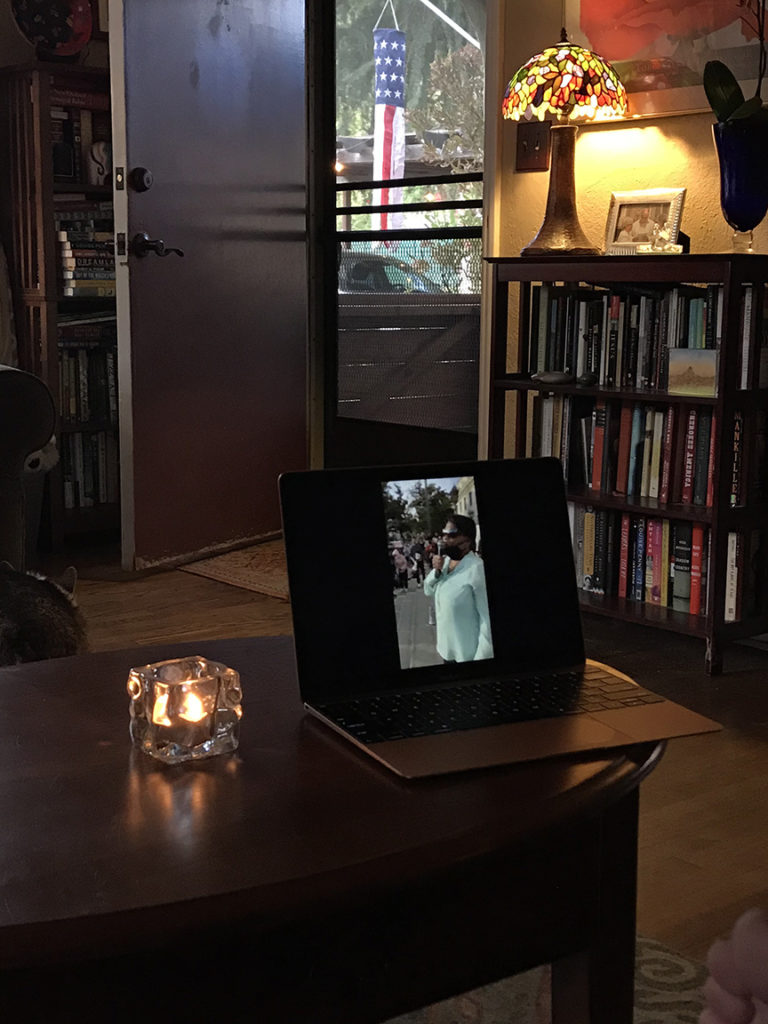 In the wake of Floyd’s death and calls for action, Edwards-Acton, who is also the rector of St. Stephen’s Church in Hollywood, said the task force is expanding its original mission of advocacy for immigrants and undocumented persons, to incorporate a unified response for racial justice.

“We feel compelled to move in the direction of becoming sanctuary for all,” he said. That response would include, in part, offering resources for individuals and congregations “on how to be a proactive, positive, effective part of the fight for racial justice now.”

Additionally, those resources will include a variety of ways to participate. For example, he attended a May 31 evening vigil at Pasadena City Hall which drew 1,000 people, while the Rev. Canon Susan Russell, participated in that same vigil digitally.

Russell is an assisting priest at All Saints Church, a vigil sponsor. “Sunday night’s action was an extraordinary witness to the power of protest to lament the sacrifice of yet another innocent black life on the altar of white supremacy, and to commit to be agents of change in the systemic change that will set us all free of the sin of racism,” she said.

Russell also serves as the diocesan canon for Engagement Across Difference and coordinates the One in the Spirit campaign initiative, to deepen relationships and build bridges among differing communities.

“Whether we participated in person on the plaza at Pasadena City Hall or virtually through the live stream, we were united in raising our voices to become the change we want to see.” 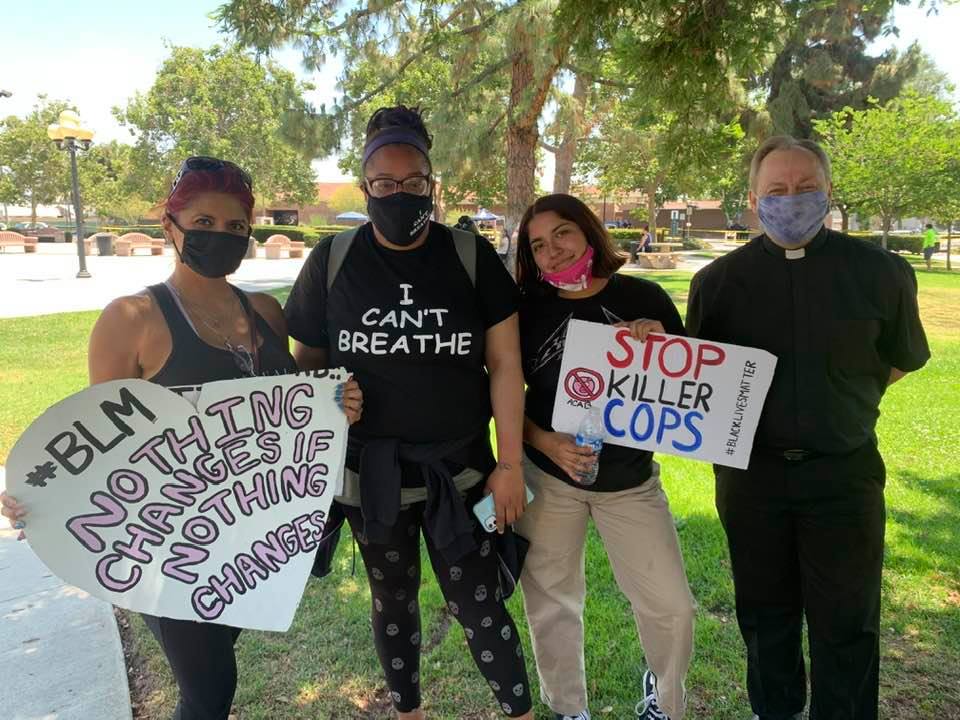 Steve DeMuth (at right), rector of Holy Trinity Church, Covina, stands with other protesters at a Covina rally on June 3. Photo: Courtesy of Steve DeMuth

A June 3 rally at Covina’s Heritage Park drew the Rev. Steve DeMuth, rector of Holy Trinity Church. “The group knelt for eight minutes and remembered the knees that dug into a man’s back, twisting his head, and pushing it into the pavement,” he wrote in a Facebook post.

“I also took time to stop and talk with our amazing Covina Police Officers and offered prayers for them as well. We all should want justice for Floyd’s family. Black and brown people deserve better treatment at the hands of those sworn to protect them. Until we can say #blacklivesmatter, we cannot truly say all lives matter.” 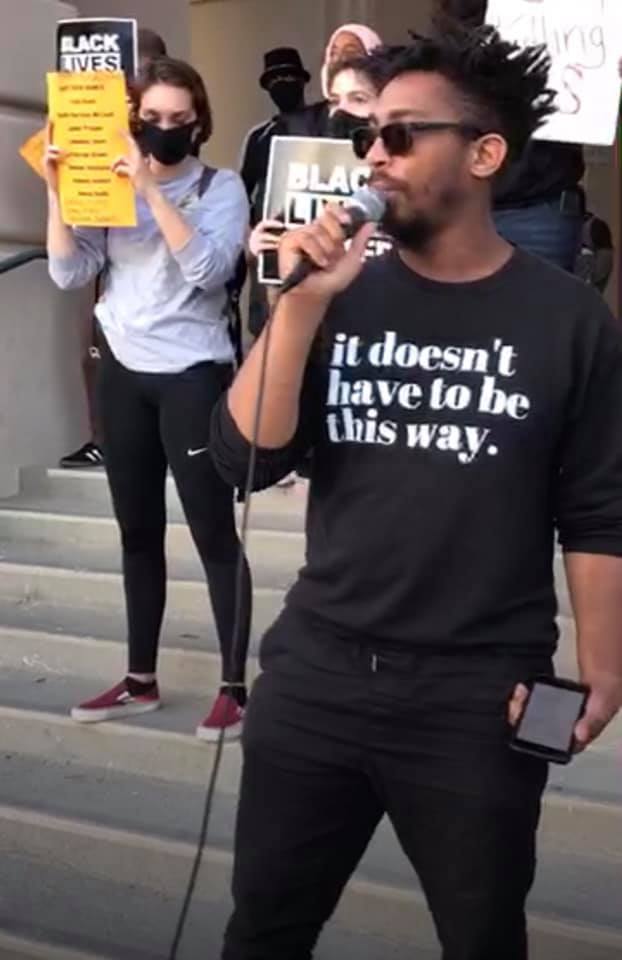 Justin said it is important for clergy to be visible “and to make their voices heard and to say that there needs to be change.”

After the vigil, he wrote in a reflection to the St. Michael’s community that “we are all supposed to be listening and using our voices at this time. Now is the time to go out and proclaim. There comes a time when it’s time to get out there.”

Similarly, he has returned to using The General Confession from Rite 1 (Book of Common Prayer, p. 331) during virtual services beginning Sunday, June 7. The prayer, which includes the words “We acknowledge our manifold sins and wickedness, which we from time to time most grievously have committed …” is, he says an “important reminder that we say ‘we confess,’ not ‘I confess.’ We acknowledge that we all participate in a system of injustice and we have to take ownership of those things as well.” With it, “I wanted to move us, to say what’s going on in the world must be called out for what it is, if we want there to be change.”

The Rev. Christopher Montella said he attended two protests that merged into one on June 4 in Santa Clarita.

“I was struck by the energy of the young people using, finding their voices,” said Montella, rector of St. Stephen’s Church of that town. At the end, the 800 attendees knelt in silence for 8 minutes 45 seconds, he said.

The powerful silence gave way to a rushing of the wind, he said, “and slowly, as time went on, fists began to rise in the air and, for the first time, I think I really understood Pentecost. The wind was so clearly the rush of the Holy Spirit, washing over the crowd. Fists became flames, lighting above everyone’s heads. In that moment, though we were all different, we all understood each other and were united to each other.”

It felt, he said, like a “collective heartbeat of the crowd calling for peace, calling out for relief, calling out for an end to oppression and senseless loss of life for black and brown people in this country. It was a vision of the world I want to live in.” 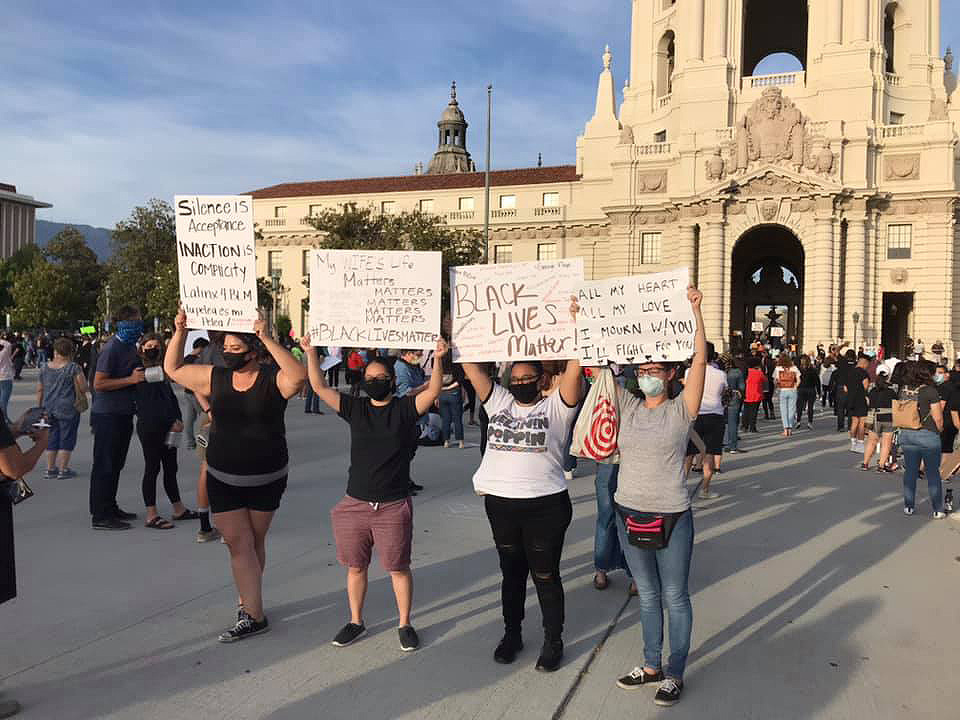 Protesters display signs at Pasadena City Hall rally on May 31. The building is across the street from All Saints Episcopal Church, whose members were active at the event. Photo: Mike Kinman

Julian, son of the Rev. Greg Kimura, St. Andrew’s rector, said that after Floyd’s death, he and friends posted ‘Black Lives Matter’ and ‘I Can’t Breathe’ signs throughout the community. They joined protests against “the serious problem with systemic racism in this country. It’s really important to take a stand right now, especially with the president we have.”

The elder Kimura, co-chair of the diocese’s Sacred Resistance task force, agreed. “My father was born in the Minidoka Internment Camp in Idaho” during World War II, he said. “I swore that if any situation like this popped up again, where there was hatred in the air, I was going to be one of the people who showed up,” said Kimura, who has also been joining vigils and protests in the Ojai area. “I always believed clergy should have stood up and said no before people got hauled off to the camps.”

Greta Griffen, 16, a Nordoff High School junior, said the powerful testimony of a good friend, who is black, convinced her to join the protests.

“I felt like I had to go out there and be a part of it,” she said. “It’s horrible, what’s happening, and if we don’t all stand up together, there’s no way anything’s going to change. I wanted to be part of change.”