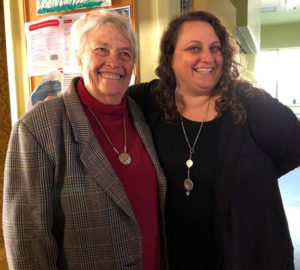 Lynn Edmonds, left, founder and first director of One Step a la Vez, poses with her successor, Kate English. Bishop Diane Jardine Bruce photographed the pair during a recent visit to the youth center, which originally launched at Trinity Episcopal Church in Fillmore.

America Muñoz, 28, says the One Step a la Vez center in Fillmore — originally housed at Trinity Episcopal Church there — introduced her “to the concept of working towards bettering your community by tackling social justice issues one step at a time.”

And it changed her life forever.

“There really was no place in Fillmore youth could call their own,” recalled Muñoz, who recently returned from a two-year stint with the U.S. Peace Corps in Morocco.

But “the One Step,” as it is affectionately known, “was a great place for us youth to learn about leadership, responsibility, and public service, all while having fun. I loved that it was a place where we, the youth, were the ones making the decisions because people actually took the time to listen to our opinions in this space. It really was and is an empowering space.”

In 2000, Lynn Edmonds was retiring from a distinguished teaching and middle school principal career and “was trying to decide what to do in my retirement.”

She did what came naturally: “I asked the kids what would be helpful.”

“I went around to clubs and service groups and church groups and asked teens and adults what would help meet the needs of the low-income underserved minority population, which is pretty much all of Fillmore.”

Eventually, the answers emerged in 2008 as the One Step a la Vez — One Step at a Time — center in the Trinity Church hall. The center’s name was chosen by youth to remind them to take “one step at a time” toward self and community improvement and also as a reflection of the dual heritage of the community.

“We started very small,” recalled Edmonds, in a recent telephone interview with The Episcopal News. “We couldn’t have started if it hadn’t been for the Episcopal Church; the community’s very small and doesn’t have a lot of meeting rooms.”

Since that time, some things have changed. Others, not so much.

The center, which later moved less than half a mile away to larger quarters at a Methodist church, has expanded its programming and service area to include Fillmore and Piru, the Santa Clara Valley, but poverty, educational, environmental and other challenges remain.

“As an educator, it empowered me to see the students get that little flash, that they could read, they could behave differently. Now, the exciting thing is that the kids who started the center are coming back,” said Edmonds, 76, now a Fillmore city council member. “One helps me with city issues. One was in the Peace Corps in Morocco.

“One of the young men that helped start the center it is in Indonesia, helping someone write grants to have a school. Another student spent a year in a South African township. She now lives in Germany with her husband. I’ll see her when I visit my son in Germany in June.” 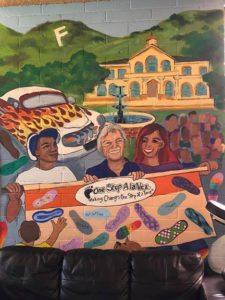 Meeting youth ‘where they’re at’

For youth in Fillmore and Piru today, the One Step “has become the home youth tell me they wish they had,” according to Kate English, who became executive director in 2015.

“So many of the youth in our area are dealing with issues of poverty,” English said. “We’re the poorest area in Ventura County, and we deal with all the issues that come out of that poverty — substance abuse, domestic violence, and generational gang involvement.

There are immigrant families and parents who work in fields all day and the youth are looking for another place to be, a healthier home environment.”

The center is open weekdays from 1 p.m. to 7 p.m., and offers a daily free hot meal and a twice-monthly food pantry. There is homework help, assistance with school supplies, leadership mentoring, student empowerment, and individualized support for teens and young adults who are homeless and/or LGBTQ. Recently, the center began providing a youth crisis counselor on Mondays, offering 10 free sessions per youth.

“The drop-in center has that feeling of a place where you are home,” English told The News. “There’s a ping-pong table, a pool table, video games, wi-fi access, musical instruments and a silkscreen shop. It’s like the staff is providing that extended family, healthy adults mentoring and trying to meet each youth where they’re at.”

There are also classes and support groups for parents and the wider community, and for those impacted by domestic violence, substance abuse and other challenges.

“We try and discover the youth’s strengths and goals and help empower them to find their voice” and to resolve issues, English said.

For example, a recent social media challenge required a community consultation, she said. “We sat down and asked, what are the rules — should people be allowed to live-stream from the One Step without asking the permission of everyone around them? They all said no. They’re feeling protective of each other and of the center.”

On Wednesdays, there is a gathering for the Pride Project, which supports LGBTQ youth. It was so popular, it has grown into additional meetings on Fridays in Santa Paula, English said.

“We found they needed a social supportive space, because we also found that [LGBTQ youth] are at higher risk for suicide ideation, homelessness, unhealthy online dating stuff,” she said. “Once a month, we have an educational piece for the LGBTQ group,” including self-harm prevention workshops “and creating moments for youth to tell us what are the problems affecting their lives and what they need.”

The center is also reaching out to school support staff and county residents, offering cultural competency training about LGBTQ youth.

For Lorenzo Palomera, a former One Step student now at the University of California Santa Barbara, that support was critical.

“When I first arrived at the One Step, I was a shy, timid, and introverted teen who would have never spoken up about the values I believed in, for fear of causing conflict,” Palomera wote in a grant proposal for the center.

“Thanks to the One Step, I’ve blossomed into a social justice-oriented person this world could need more of; I have developed a voice, where there was a whisper,” said Palomera, who identifies as Latino, low-income, first-generation and gay.

Through the One Step’s supportive infrastructure, he said, he was able to reach out to others, and to embrace the center’s “push for civil rights, and providing a safe place for queer youth who may not be accepted for who they are at home or at school.”

Additionally, he said, the One Step’s Project Pride, begun in 2016, has provided LGBTQ youth and their allies “a safe place to be themselves, support one another, and be a time to get resources for navigating one’s mental health toward a positive mindset of their sexual orientation and gender identity.”

Via the One Step, Palomera felt empowered to tackle other school and community issues, such as unequal access to high school advanced placement classes, the lack of books in the school library authored by LGBTQ and people of color, immigrant rights and environmental preservation.

Because of the One Step, there are “students who have handed out rainbow ribbons for Coming Out Day in their school, who’ve scheduled meetings with their principal about having a gender neutral bathroom implemented, and who have spoken in front of their school board to push for LGBTQ cultural competency for their administration and staff,” he said.

English said the center’s mission of aiding students naturally extends to “changing the community for the health of all.”

“We’re not just encouraging them (the students) to figure out what their own goals are, but what are their goals for the community, and then giving them the tools to achieve those goals. We all go to city council meetings, school board meetings, we talk to the powers that be.”

The center also provides temporary employment for youth, she said, so they can “have their first job, to get the experience of working, and to make a little money.”

About 120 youth are formal members of the One Step, and attend daily; another hundred or so drop in weekly, according to English. Membership is free; participants need to be 13 to 19 years of age.

Anywhere from 10 to 20 percent of the youth are in the juvenile justice system and are often referred to the center by their probation officers, English said.

Funded via county, foundation, church and individual grants, the center hosts regular field trips for students to concerts, museums, the mountains — “wherever we can get good deals to take them and occasionally splurge, like Magic Mountain, or paintball. We visit colleges and encourage them to think about what are their dreams,” she said.

Joshua Traspasso, 24, “started falling in love” with the One Step after English described the center to his Fillmore High School class.
It proved to be a lifesaver when he ran away from his parents because of violence in his home, he said.

“Kate was the one who helped me find my place in life,” he told The News in a recent telephone interview. “Now I’m a staff person and things have gone better and better. I can pass on the blessings I’ve received to new people.”

The center is a critical presence to help youth “open up and to expand their life,” he added. “It turned my life around.”

Alesha Felix, 16, is a current One-Stepper who got involved because “it’s a place to do homework, play the piano and to be safe” until she gets a ride home, provided by the center, about 6:30 p.m.
“My family trusts the center to have me here,” she said. “They keep it safe in here. I come here after school instead of being out in the streets.”

For America Muñoz, who recently began working at the Social Security Administration, the center imparted leadership skills and a sense of paying it forward that has changed her life.

While serving as a Peace Corps volunteer, she said, “I developed youth and women’s empowerment programs for many youth in Morocco who find themselves in similar situations like we did, not having a space of their own and little to no opportunities offered to them in their community.

“My job as a Peace Corps volunteer was to identify leaders in the community and work with them to develop projects that benefited the youth of the community I was serving, The lasting impact of the One Step has been that I always put public service at the center of what I am doing and I always consider how I am contributing to making my community better.”

Muñoz is still “very much involved in the community of Fillmore, serving on the advisory committee for Councilwoman Edmonds in hopes to build greater community involvement in the decision making for the City of Fillmore.”