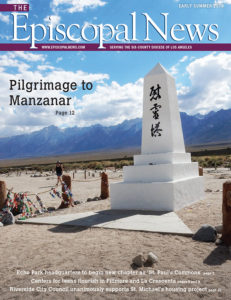 Online PDF
(For reading pages on computer or other device)

SWF file (for reading in magazine format:
requires Flash or other SWF reader)

Please note: The Episcopal News is now using Dropbox to make its online, print and magazine versions available. Readers do not need to have a Dropbox account to download the files. Click on the link; if the program invites you to create an account and you don’t wish to do so, click the “continue download” link, and the file will be transferred to your computer.

“When idiosyncratic beliefs put people’s lives at risk — when fake Good News ends up as bad foreign policy, as it has in the Trump administration — it’s time for progressive denominational Christians speak up on behalf of one of the greatest gifts to people of faith: Enlightened biblical scholarship.”

All are welcome to join in the fifth annual Interdependence Day Walking Meditation around Echo Park Lake starting at 10 a.m. on July 4, hosted by the Interfaith Cooperative of the Episcopal Diocese of Los Angeles.

America Muñoz, 28, says the One Step a la Vez center in Fillmore — originally housed at Trinity Episcopal Church there — introduced her “to the concept of working towards bettering your community by tackling social justice issues one step at a time.” And it changed her life forever.

Coming events and items of interest; news of the diocesan community, Connections, ordinations and obituaries.