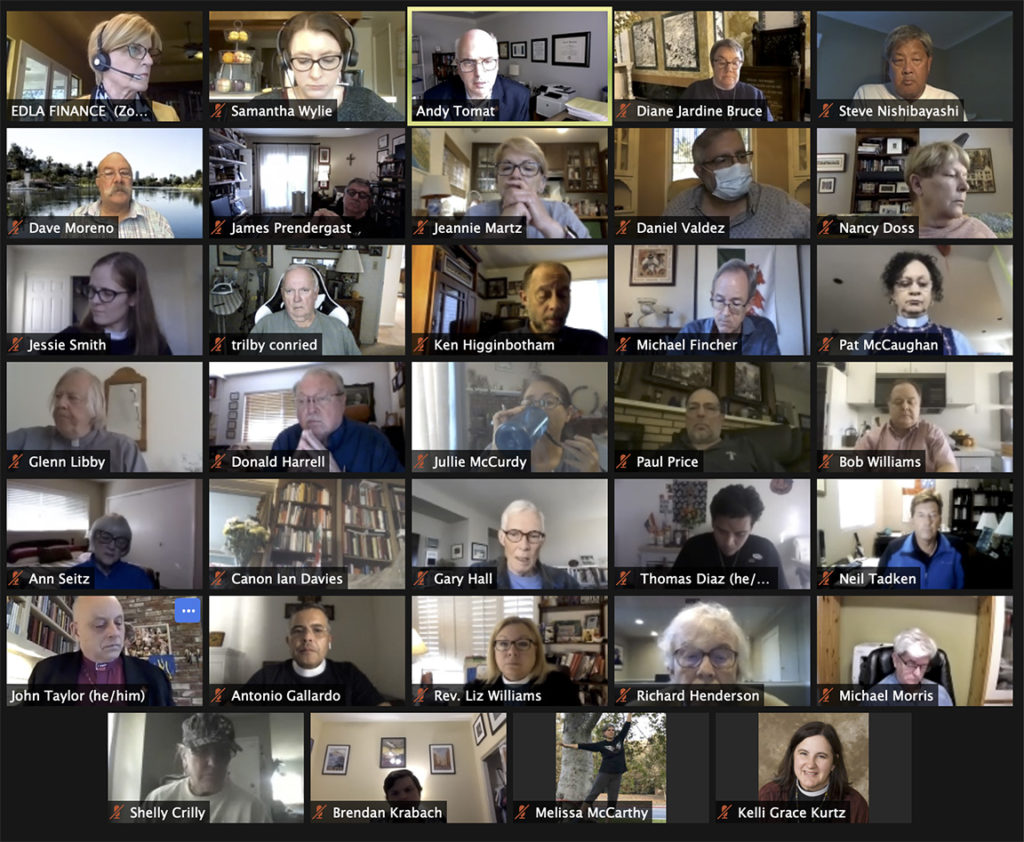 Members of Diocesan Council meet by Zoom on Oct. 29.

Delegates to the upcoming Nov. 14 – 15 diocesan convention will be asked to ratify a $6 million budget for 2021, representing severe cuts to diocesan ministries and a 13% overall reduction from the previous year.

Members of Diocesan Council, meeting virtually Oct. 29, approved the $5.99 million budget, a decrease of nearly one million dollars, from $6.89 million in 2020. Once the Corporation of the Diocese approves the use of $894,921 of remaining unrestricted savings held in DIT, it will be presented to the diocese’s first-ever virtual convention for approval.

Canon Andy Tomat, diocesan treasurer, said reduced congregational giving to the Mission Share Fund (MSF), along with a decline in available capital funds through Corp Sole and the Corporation of the Diocese, forced the cuts.

The budget was balanced, as required by canon, through identification of unrestricted funds held by the Corporation of the Diocese as well as income generated by restricted Corp Sole funds. Corporation directors will have to approve the draw from its coffers.

The projected $1.5 million deficit was also offset, in part, through such reductions in ministries as:

The contributions the diocese identified from the corporation and Corp Sole, totaling about $1.4 million, restored some grants to critical ministries including the Neighborhood Youth Association, Bloy House, and the Stillpoint Center, Tomat said

The Rev. Michele Racusin, diocesan chief financial officer, reported that August losses, largely from unpaid congregational mission share fund pledges and the forced closure of the retreat center because of the Covid-19 pandemic. amounted to about $44,000. Year-to-date losses totaled about $658,000, she said.

The diocese is managing to survive because of a U.S. Small Business Administration Paycheck Protection Program loan-to-grant, Racusin told council members. Congress approved the Coronavirus Aid, Relief, and Economic Security or CARES Act in March to assist businesses with resources for payroll, overhead and other expenses.

“At this point it is still a loan, but we expect it to be turned into a grant sometime next year,” she said. “We are able to use that cash now and that has virtually wiped out this loss, but not on paper.”

A new model of budgeting

Bishop Diocesan John Harvey Taylor said the diocese is moving into “a time of reorganization and transformation, away from a model of budgeting based on using up money from capital funds and from the sale of property that was not being replenished,” to greater financial stability.

Foundational to that transformation is the “Means of Grace” capital campaign, which aims to raise $30 to $40 million in endowment funds over the next few years. The goal is “to support ministries that help us form the leaders the church needs in the 21st century to help our neighbors in need,” Taylor said.

Such leaders will also be needed, he continued, “to assist local congregations so they can not only survive but thrive in a time it is absolutely vital we remain both a pastoral and prophetic presence in all the neighborhoods we’re in.”

He added that the Holy Spirit is inviting the diocese to a new conversation about the MSF budget, “rooted in a deeper sense of our mutual obligations to one another as a diocesan family, a diocesan family that ensures, as all families do, that no one is left behind,” Taylor said. “That means that we’re not going to operate in a way that privileges well-off institutions at the expense of those who are not.”

That conversation will include revisiting the canonical requirement that parishes pay 12% of their annual operating budget. “We still talk about it as a pledge,” Taylor said. “It is still viewed to an extent as discretionary. The family metaphor comes in handy because it’s not discretionary to pay the rent, the mortgage, to feed our family and make sure that all of our family are cared for; it’s mandatory. Look for a lot of news about the capital campaign and a lot of invitations to collaborate” in 2021, he said.

In other reports to the council:

The Standing Committee met Oct. 28 and approved consents to the elections of Oregon Bishop-elect Diana Akiyama and Wyoming Bishop-elect Paul Gordon Chandler, according to the Very Rev. Canon Gary Hall, Bloy House interim dean and the committee’s representative to council.

The Rev. Canon Kelli Grace Kurtz said the Program Group on Mission Congregations has reviewed, prayed about, and approved applications for 2021 mission development grants for the 27 congregations requesting them.

The congregations had been advised to submit their 2020 grant request amounts and “all but six did,” she said. “Two of the missions reduced their ask [request], which is extraordinary. Four asked for an increase and we took a very close look at those in particular,” Kurtz said.

Grant requests ranged from $17,000 to $98,000 and averaged about $34,908. “We are recommending that all of the asks be fully funded, adding the one congregation that actually needs more than what they asked for, for a total amount of $1 million.”

Canon Steve Nishibayashi, diocesan Secretary to Convention, thanked deanery deans for their support in organizing pre-convention deanery assemblies in preparation for convention. But some crucial lay and clergy delegate information is still missing, he said.

A practice get-acquainted-with-technology session for convention delegates is planned for Saturday, Nov. 7. Additionally, Nishibayashi and convention coordinator Samantha Wylie have been hosting Monday evening virtual sessions to address questions or concerns about the upcoming convention. Information regarding those meetings is available at the convention website.

No resolutions have been presented, but there is a proposed canonical change for convention consideration. The canonical change would designate alternative mission congregations as mission centers and ensure them seat, voice and vote at conventions. See related story here.

Youth delegates are still needed in Deaneries 1, 2, 3, 6 and 7, Nishibayashi said.

Convention is slated to begin at 9:30 a.m., with Morning Prayer and a 10 a.m. call to order, and to adjourn at 3 p.m., he said. There will also be “bio breaks” and time allotted for visits to the virtual exhibit hall.

A Nov. 15 diocesan-wide Eucharist will close out convention. Guest preacher at that Eucharist will be the Rev. Canon Stephanie Spellers, Presiding Bishop’s Canon for Evangelism, Reconciliation and Care of Creation.

Nishibayashi also said there will be a revised 2020 parochial report, “so it’s not just filling in numbers,” but allowing congregations to tell their own stories.

Regarding the 2021 General Convention of The Episcopal Church, slated for June 30 – July 9, 2021, in Baltimore, Maryland, Thomas Diaz, newly elected liaison to Diocesan Council for the Los Angeles deputies, reported that they will be meeting virtually with their counterparts from other dioceses across the state.

Bishop Suffragan Diane M. Jardine Bruce said for the first time ever she will not be seated at the convention dais (at St. Paul’s Commons), but will be attending convention remotely. She will be in quarantine at that time in anticipation of a visit from her young grandson.

New Community ministries such as the Li Tim Oi Center and the Instituto de Liderazgo are creating a video programming project to be made available to the wider diocesan and church communities.

Additionally, she said, The Gathering, A Space for Asian Pacific American Spirituality, has received grants from The Episcopal Church’s Becoming Beloved Community program for efforts focused on racial reconciliation. The Gathering also received a grant from the United Thank Offering.

Bruce also reported that “Traumas and Untruths,” a series of three webinars examining systems of oppression that focused on the Doctrine of Discovery, Racial Identity and Racial Capitalism, recently concluded and will be offered again next year.

Taylor invited everyone to attend the Bishop’s Gala via Zoom, at 6 p.m. on Saturday, Nov. 7, featuring an address by Presiding Bishop Michael Curry. While there is no cost for admission, funds will be raised online for diocesan programs including Bloy House, the Episcopal Theological School at Los Angeles. Full information is here.