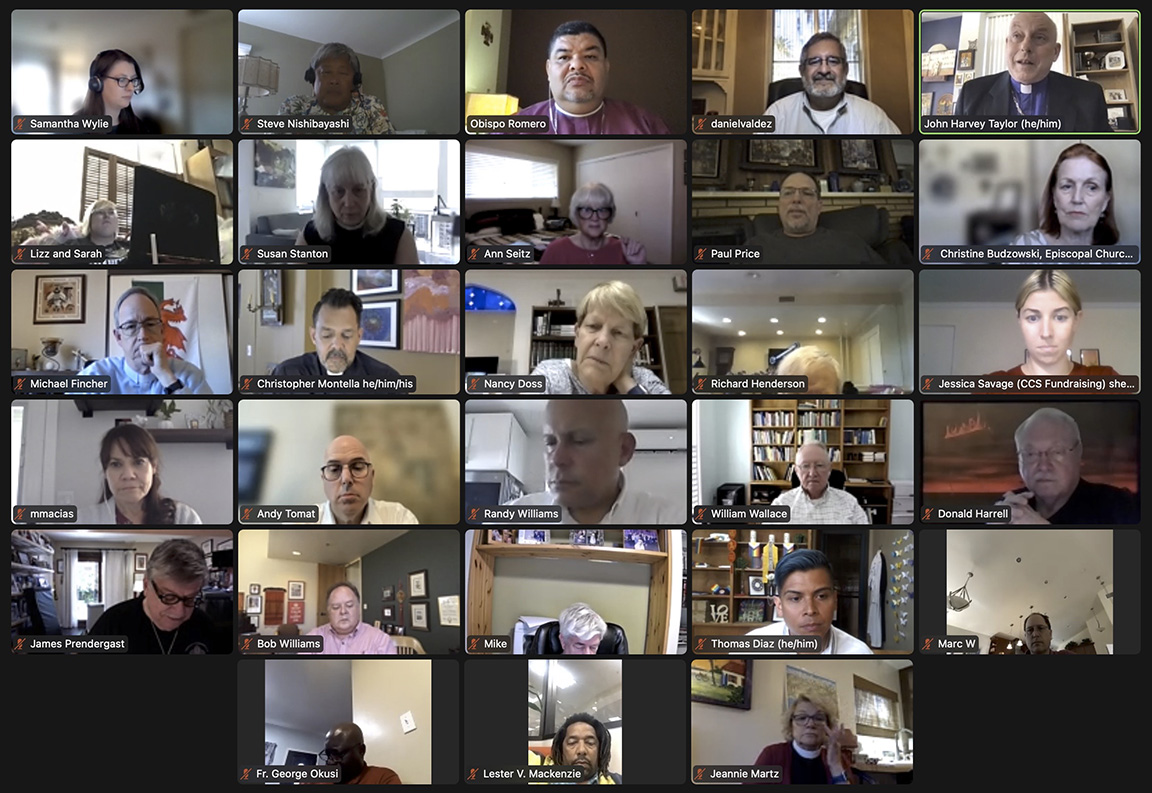 [The Episcopal News]  A visit from Guatemalan Bishop Silvestre Romero and capital campaign updates were highlights of the May 12 online meeting of Diocesan Council.

Romero in January 2022 hosted members of the diocesan border ministries committee for a pilgrimage along “the migrant road,” from Guatemala to Mexico, in witness to the struggles of those seeking refuge in the U.S. “Since then, we’ve been exchanging ideas about how we can make a difference … to find a way to support them give them options and information and walk with them, as necessary,” he told council. 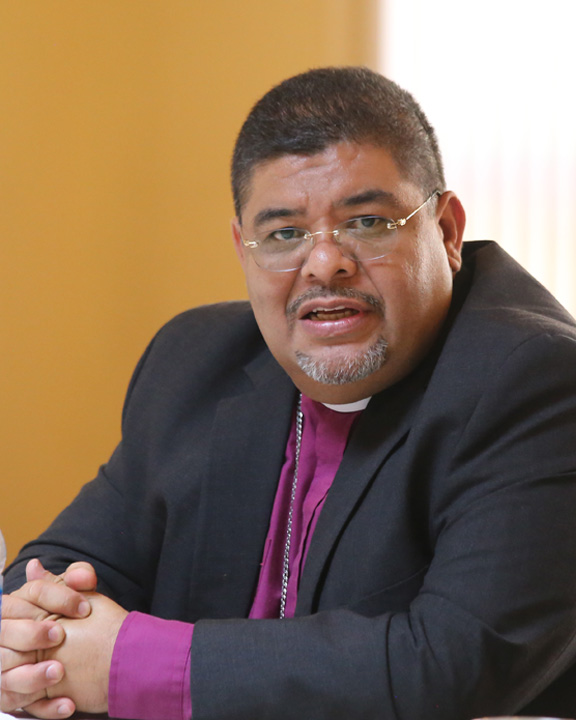 Bishop Silvestre Romero of Guatemala visits with diocesan staff on May 12. He greeted Diocesan Council via Zoom that afternoon. Photo: Janet Kawamoto

He also expressed hopes for collaborative ministries and welcomed future visits between the two dioceses.

Bishop John Harvey Taylor said Romero visited several churches and ministry centers; the Interfaith Refugee and Immigration Service, or IRIS, an institution of the diocese; and met with diocesan staff and clergy in charge of Spanish-speaking congregations. He has been a pioneer in New Community ministries and asset-based development, prior to his November 27, 2018, installation as bishop of Guatemala. He had also served congregations in Washington, Massachusetts, and California, said Taylor, who introduced Romero. (More about Romero’s visit is here.)

His diocese represents 38 mission congregations, yet the largest congregation’s average attendance is 600 – but not on Sunday, “because Sunday is market day,” Romero said. Members gather instead on Tuesdays, holding all-day meetings. “Six hundred people gather to pray, to have fellowship,” Romero said. “The area where they sit on the ground, to share their meal is massive. It is a wonderful community.”

Joined by capital campaign consultant Jessica Savage, Taylor offered an update on the “Generation to Generation” campaign and invited council members to participate along with members of other leadership bodies such as the Standing Committee, the Corporation of the Diocese, and the Diocesan Investment Trust.

“Our ministry is not just for our time but for the saints to come who will inherit the church …” said Taylor. “Our call is to be open to seeing how privilege and prejudice have kept us from proclaiming the plural face of God.”

Taylor said the campaign would raise endowments for diocesan operations, helping form church leaders, and caring for neighbors in need. A fourth fund will grow as missions and parishes join in the diocesan campaign by undertaking their own capital campaigns for local needs. Summing up all the diocese’s reform efforts, including a balanced budget and reinvigorated Corporation of the Diocese, Taylor said, “This is an alternative to selling churches and liquidating capital funds.”

Taylor said he is excited by the vision of the Program Group on Mission Congregations, for cultivating emergent congregations and ministries, such as the congregations that are converting unused land into affordable housing spaces and other alternatives to traditional ministry models.

Citing the diocese’s 133 congregations, he added: “We want to stay there (at 133), and we can’t do it without this endowment. I am inviting each of you to join Kathy and me in playing a role, whether it’s a gift, a pledge or a planned gift. The amount and way you do it is less important than your coming alongside to participate in some way.

“We are inviting all the members of the Body of Christ to join us.”

Diocesan treasurer Canon Andy Tomat said mission share fund income has improved considerably since last month’s report. “Mission share income is now running only $6,000 under budget, versus $51,000 behind budget in February and the $164,000 deficit in January.”

Similarly, grant income continues to run ahead of budget, “because IRIS has so far received $182,000 more in program income from government agencies than expected to cover the increased number of refugees they are assisting,” he said. IRIS is funded in advance of program costs.

Meanwhile, Corporation of the Diocese income is $224,000 under budget because the funds to cover capital campaign expenses have not yet been allocated by the Corporation, he said.

Year-to-date, expenses are about $500,000 under budget, but will likely catch up in the second half of the year, with capital campaign events, outlays from IRIS grants received, and costs associated with participation in both the General Convention of The Episcopal Church and the Lambeth Conference, the every-ten-years gathering of bishops across the Anglican Communion.

Diocesan Investment Trust reports for January through March have been mailed, Tomat said. Previous delays were the result of staffing issues with the long-term third-party fund administrator and will be addressed by “a task force of trustees who are licensed securities professionals,” he said. Concerns regarding DIT funds may be forwarded to finance@ladiocese.org.

The Corporation of the Diocese and The Standing Committee each approved seeking a lower level of loan repayment for a $1.35 million loan for St. Andrew’s Children’s Center in Irvine, and the extension of a $994,000 loan for St. George’s Church in Laguna Hills.

The Program Group on Mission Congregations reconsidered, but declined to act, on the application of St. James’ Church, Newport Beach, to move from mission to parish status in 2022. The Very Rev. Gary Hall, PGMC convenor, said there was enthusiastic support for the change, but it requires a vote of diocesan convention and the decision “involves the amount of work we’d have to do to get ready for it.” Convention will consider their application in 2023.

Smecker, a parishioner at St. Andrew’s, Irvine, will also serve as co-coordinator for Province VIII, Budzowski told council. She reported that the UTO national board will not travel to the Triennial.

“They will use the funds instead to handle shipping costs for UTO ingathering materials,” especially for mission congregations that might not be able to afford those costs, she said. “They’re turning the money they save by not attending … to assist congregations in need.”

Taylor also reported that, following the clergy conference, about 21 clergy and staff members in attendance tested positive for Covid. “There were no hospitalizations and no serious illnesses, although some experienced cold symptoms and fevers,” he said, adding that at least one clergy spouse was infected as well as two unvaccinated three-year-old children of priests, both of whom had fevers. He stressed, “We’re not out of the woods yet,” urged institutions and individuals to be vigilant, and promised that the diocese would monitor the current uptick closely.

The Rev. Christopher Montella announced a Pride celebration at 10 a.m., Saturday, June 25, at St. John’s Cathedral and the return of the annual LGBTQ+ garden party at 2 p.m. on June 26 at the bishop’s residence in Pasadena.

Canon for Common Life Bob Williams announced a June 6 – 8 Summit of the Americas event convened by the U.S. Department of State that will include representatives from countries in Central, North and South America. “There is a faith leaders reception June 6 that will be held at St. Paul’s Commons,” he said.