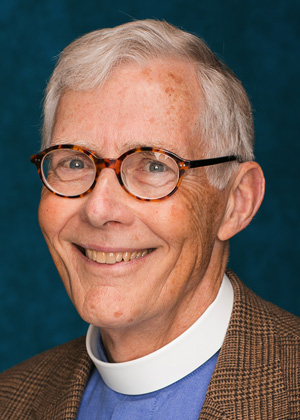 Hall will succeed the Very Rev. Sylvia Sweeney, who will retire at the end of July after 11 years as dean of the school, which offers theological education both for lay ministers and those seeking ordination.

In her final weeks as dean, Sweeney is overseeing Bloy House’s move from its Claremont campus to a new location at the Lutheran Center in Glendale, headquarters of the Evangelical Lutheran Church in America’s Southwest California Synod. The school will be known as Bloy House: The Episcopal Theological School at Los Angeles.

“With deep roots in our region and diocese as well as experience at the helm of other seminaries, Gary has a profound understanding of Bloy House’s challenges as well as its unique potential for forming the leaders the church needs, both lay and ordained, in a multicultural setting,” Taylor said. “It will be a privilege to work with him and support him during this vital year in the life of a beloved diocesan institution.”

“I’m grateful to the Bloy House board for giving me the opportunity to help the school make the transition from Sylvia Sweeney’s leadership in Claremont to the next dean’s tenure in Glendale,” Hall told The News. “I taught at Bloy House in the 1990s and have great respect for its past and hope for its future. Bloy House is vital to the future of the diocese in both ministry education and faith formation, and I am eager to be part of helping to shape its ongoing life and work.”

Hall was dean, president and professor of Anglican Studies at Seabury-Western in Evanston, Illinois, from 2005 to 2010, and an adjunct professor at Bloy House from 1995 to 1999. He has taught at the University of California at Los Angeles and at Berkeley Divinity School at Yale, and has been an interim principal, director of studies and English teacher at Oakwood School in North Hollywood, in addition to other teaching assignments.

“I am thrilled that my former professor of Anglican Theology and Polity while I attended Bloy House will now be the interim dean!” Bishop Suffragan Diane M. Jardine Bruce told The News. “Having gone through the D.Min. [doctor of ministry] coursework at Seabury Western while Gary was dean there, I know there will be a pastoral, witty and wonderfully intelligent hand on the rudder directing Bloy House. What an exciting opportunity for us all here in the Diocese of Los Angeles!”

“I am grateful to Gary Hall for agreeing to serve Bloy House as interim dean,” said the Rev. Canon Melissa McCarthy, canon to the ordinary. “His experience is unsurpassed both in academic institutions and in the congregations he has served over his many years of priesthood. He brings a levity to all he does that makes even the most difficult situations seem hopeful. He also can speak hard truths with kindness and love. Bloy House will flourish under his leadership.”

In the Diocese of Los Angeles, Hall has served as vicar of Church of the Epiphany, Westlake Village (now Oak Park) (1981-83); vicar of St. Aidan’s Church, Malibu (1983-89); rector of St. George’s Church, La Cañada (1989-90); and senior associate for education at All Saints Church, Pasadena (1990 – 2001). Most recently he has been priest-in-charge at St. Wilfrid’s, Huntington Beach, and interim rector at Trinity Church, Santa Barbara.

From 1994 to 2001 he was sexual misconduct officer for the Diocese of Los Angeles. He has been a member of a wide range of church councils and committees, including Standing Committee, Commission on Ministry, the Program Group on Communications (chair), editorial board of The Episcopal News, the Program Group on Mission Congregations and the Committee for the Future. He has been president of the Canterbury Westwood Foundation at UCLA and a chaplain and retreat leader at Camp Stevens.

In the wider Episcopal Church he served on General Convention’s Task Force on the Episcopacy; chaired the ordained ministry and Conant Fund Grant subcommittees of the Standing Commission on Ministry Development; and on the board of directors of the Anglican Theological Review. He twice has been an alternate deputy to General Convention.

As dean of Washington National Cathedral (WNC) from 2012 to 2015, Hall made headlines when he opened the church to same-sex weddings, offered the venue for a Muslim prayer service, allowed yoga classes in the nave, advocated for gun control and called for the removal of two stained-glass windows honoring Confederate figures. He also began to reshape the cathedral’s finances and ministry to serve a diverse community even as it worked to recover from damage suffered in a 1911 earthquake.

Hall holds a bachelor’s degree in English from the University of California at Berkeley; a master’s degree in divinity from Episcopal Divinity School, Cambridge, Massachusetts; and master’s, candidate of philosophy and doctoral degrees from UCLA. He has written, edited or contributed to many scholarly books, articles, commentaries and book reviews.

Hall is married to Kathleen Matheson Hall, an elementary school librarian and teacher. Their son Oliver is a writer and musician in Los Angeles.