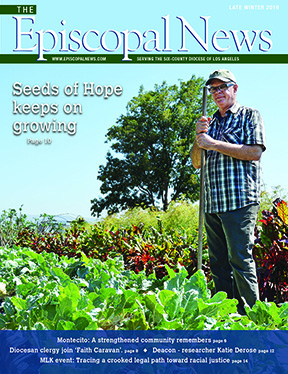 Online PDF  (For reading pages on computer or other device)

Tending shattered hearts: a mission for our churches and our diocese

For the families and friends of those killed a year ago on Feb. 14 in Parkland, Florida, and for those injured in countless other ways in the massacre, Valentine’s Day hearts will always be pierced, shattered, and sore wounded. In print and on the airwaves, the debate about preventing more acts of mass violence, especially against children, sounds as circular as ever, the same tiresome either-or. Is it a mental health or a gun issue?

Especially in the area of civil rights and racial justice, “law and morality are not the same thing,” Devon Carbado, a law professor at UCLA, told some 250 people at the diocesan Martin Luther King Jr. Day celebration, held Jan. 20 at All Saints Church, Pasadena. Furthermore, he said, “The civil rights trajectory, the pathway to social change, is not linear. It reflects what we might call a reform entrenchment; a movement forward, then a movement backward.”